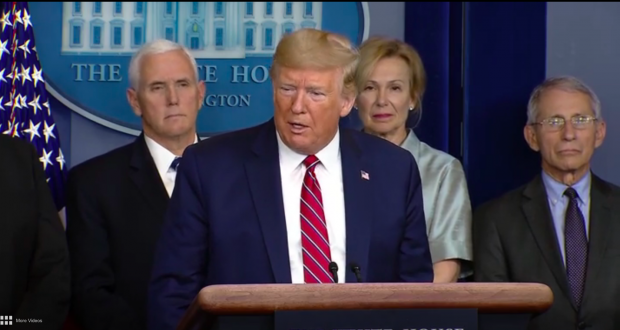 The COVID-19 coronavirus has left many Americans housebound with little to do except keep their eyes on the news, anxious for any sign that the pandemic may be slowing. The tidal wave of reporting on the virus and President Trump's response is a reminder to remain diligent about spotting media bias. A particularly potent showing of media bias came Saturday, following a White House press conference in which an NBC reporter asked Trump to address Americans “who are scared.”

“What do you say to Americans who are scared, though?” asked Peter Alexander, NBC White House Correspondent.

“I say you are a terrible reporter,” Trump responded in part.

If you read only headlines and tweets, you may think that was the end of the exchange. However, the full clip shows Trump continuing, scolding the media for fear-mongering through sensationalism, a type of media bias:

“I say you are a terrible reporter. That’s what I say. I think it’s a very nasty question. And I think it’s a very bad signal that you’re putting out to the American people. The American people are looking for answers, and they’re looking for hope. And you’re doing sensationalism, and the same with NBC and Con-cast — I don’t call it Comcast — I call it Con-cast, for whom you work — let me just say something — that’s really bad reporting and you ought to get back to reporting instead of sensationalism.”

Ironically, the coverage of the exchange itself showed plenty of sensationalism bias: 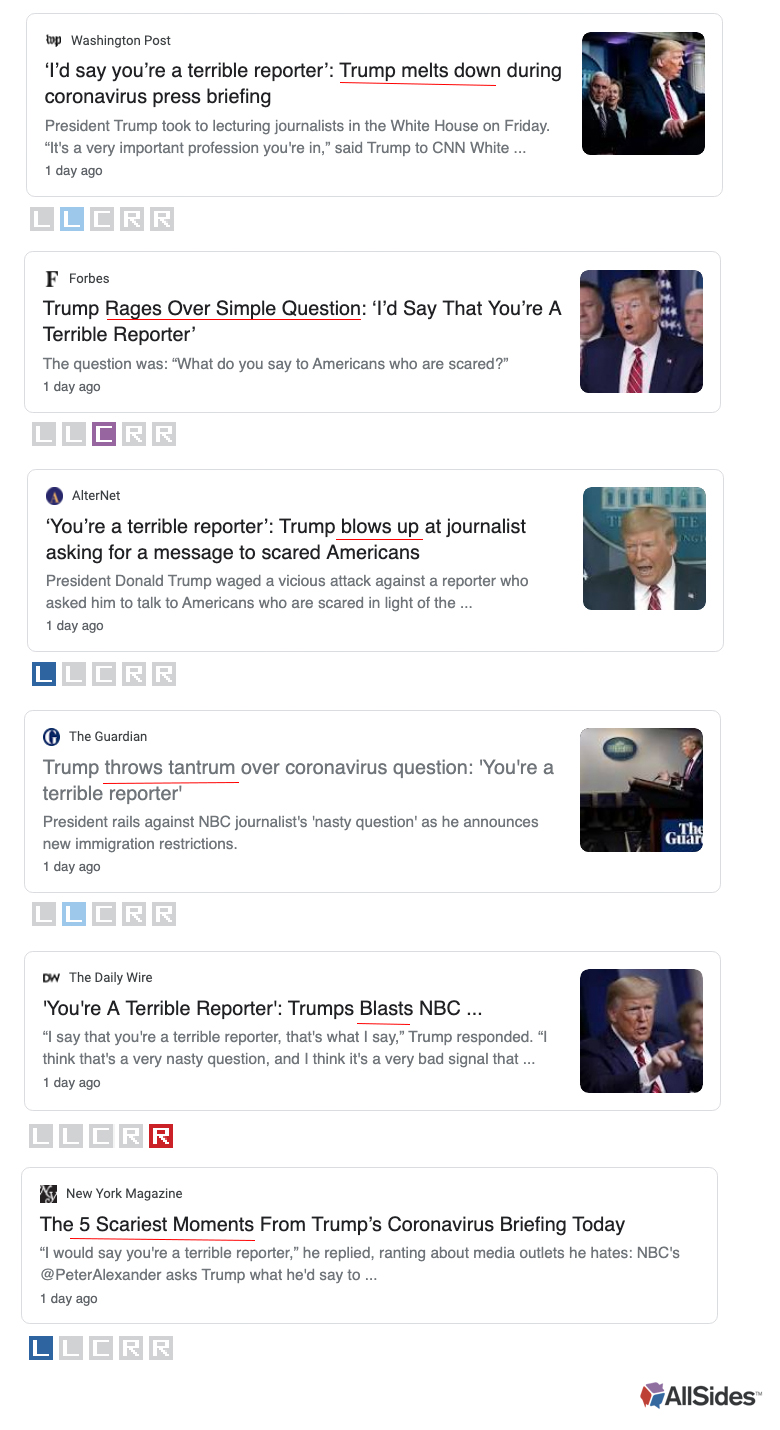 Trump “rages,” “melts down,” “blows up,” “throws tantrum,” making for a “scary moment” — these word choices paint a clear picture, a picture that a simple “Trump said” would not accomplish.

As I noted previously on this blog, media outlets on the left and right often selectively choose content in order to paint a particular picture. By focusing only on Trump’s first sentence, we get a picture of a president appearing dismissive of Americans’ concerns.

I can think of a few headlines describing this exchange that would have painted a less volatile picture:

“Trump tells reporter to “get back to reporting instead of sensationalism””

The verbs “says,” “tells,” and “calls” conjure very different mental images than “blows up” or “rages.”

This display of media bias falls under many categories: sensationalism, spin, slant. AllSides defines sensationalism as a type of media bias in which information is presented in a way that gives a shock or makes a deep impression. Language is often dramatic, yet vague. “Melts down” is both unclear and unspecific.

Spin is a similar type of media bias. It clouds a reader’s view, preventing them from getting a precise take on what happened. Trump “throws tantrum” begs many questions — what exactly did he say? Was he shouting? Did he stomp on the floor? Throw something? Employing spin to cloud the reader’s view may lead them to imagine a number of unfavorable scenarios.

Some would agree that these headlines are sensationalist, but would argue that Trump absolutely was dismissive, that he deflected and dodged the question. They would say that Trump went on an unrelated tangent and that he should have responded to this question by offering a positive message of reassurance. Working from this interpretation, Trump's apparent dismissiveness was the major nugget of news from this exchange, and should be highlighted prominently. Folks with this perspective may agree that using terminology like "blows up" is sensationalist, but that a better headline would focus on how Trump "dodged the question."

Others would see Trump's accusation of sensationalist media as relevant to Americans' fear, and exactly the right point to make. They would not see his response as dodging the question, but directing attention where it should be directed. They would see it as irresponsible for the media to skip over this very fair criticism of media.

In the midst of a national crisis, it goes without saying that we’d want our leaders to remain calm and poised under pressure — not “throwing a tantrum” or “melting down.” It depends on your perspective as to whether or not it is accurate to say Trump was blowing up, in a rage, melting down, throwing a tantrum. You may agree without a shadow of a doubt that he was. Or perhaps editors only used the exaggerated language to get clicks, regardless of the reporter’s true feelings. Coverage could have focused on the question of whether or not the media has been sensationalizing, rather than the exchange.

Americans should remain diligent and remember there is no such thing as unbiased news; journalists are often inserting their own perspective into their reporting. In my view, this time they proved Trump’s point.