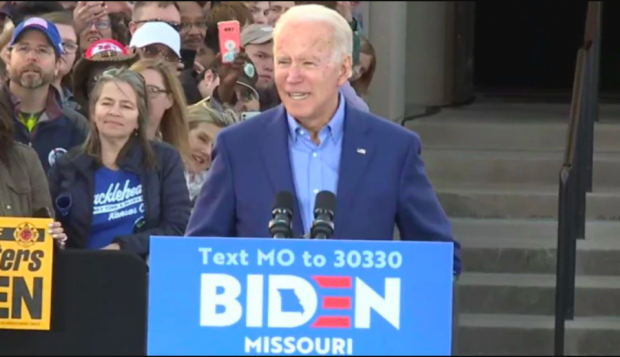 If you can remember a time before the media was oversaturated with coronavirus news, it was just over a week ago that President Trump retweeted a video of Joe Biden at a campaign rally appearing to endorse him. The video, which CNN (Lean Left media bias) called “dishonestly edited,” was originally tweeted by Dan Scavino, Assistant to the President and White House Director of Social Media:

In the video, Biden stumbles over part of his speech. Supporters can be heard laughing as he says, “...turn this primary from a campaign that’s about negative attacks into one about what we’re for. Because we cannot get reelect...we cannot win this reelection. Excuse me. We can only re-elect Donald Trump."

The clip went viral — it has been viewed 6.9 million times as of this writing. However, it cut out the second part of Biden's sentence, in which he said, “Excuse me. We can only re-elect Donald Trump...if in fact we get engaged in this circular firing squad here. It's gotta be a positive campaign."

It’s unclear if Trump knew the video was edited or not, but the video is a stark example of how online media often works these days: we see only part of a clip, fail to investigate further, and take what we saw as the full story. In reality, there’s often another perspective that paints a different picture. This is what many refer to as “fake news.” That’s because the term “fake news” doesn’t necessarily describe blatantly false information — it can also refer to omission of information, which paints a different picture. In this case, part of Biden’s speech was omitted, and the final result may be seen as fake news.

Deceptively edited viral videos are now a mainstay of modern media. Last year, media outlets and commentators accused students from Covington Catholic high school as having taunted a Native American elder at a rally; when a longer clip of the event emerged, it was clear the students hadn’t.

While CNN was quick to point out the unfair editing of Biden’s rally comments, neither side is innocent — the left media has also deceptively edited content to frame President Trump negatively.

But the widely-shared quote does not fully capture what Trump said. What Trump actually stated was:

You may not like Trump’s sentiment, but he didn’t call all Mexicans rapists — he was speaking about a group of the population. But you might not get that impression if you read news in a filter bubble.

Our media is so over-saturated with edited content and commentary, it can be nearly impossible to get unedited, original information. Going back to the source, we often find information that didn’t warrant everyone working themselves into a tizzy.

When consuming any sort of media, we have to remember that content that is replicated across our screens is usually that which has great memetic power — it is made to be highly clickable and shareable, not necessarily to tell the full story.

This piece was reviewed by Henry Brechter, Managing Editor at AllSides. He has a Center bias.