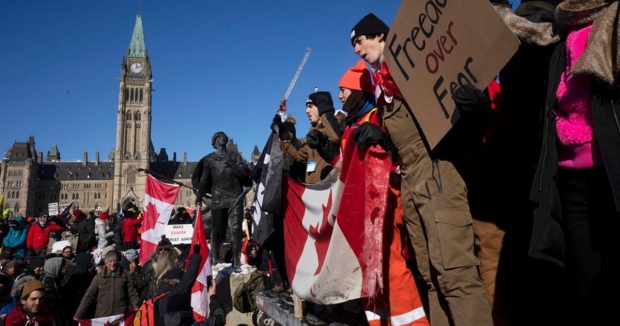 A large protest of COVID-19 public health measures led by a group of truck drivers — known as the “Freedom Convoy” — overtook Canada’s capital city of Ottawa over the weekend. Opposite sides of the U.S. political news media responded with very different coverage and displays of media bias.

One side of the news media (right-wing outlets) consistently framed the movement as righteous, while the other (left-wing outlets) often framed it as dangerous. If you read news inside a filter bubble, you’d come away with very different perceptions of the movement.

What is the Freedom Convoy, and What Is It Protesting?

The 'Freedom Convoy’ is a coalition of truckers in Canada that organized a cross-country drive over the past week in a display of objection to the government’s vaccine requirement for certain workers in the industry. The group arrived in Ottawa Friday, and a weekend of demonstrations and road blockages ensued. According to reports from across the spectrum, what began as a protest of vaccine mandates evolved into a larger airing of grievances against all COVID-19 rules and the actions of Canadian Prime Minister Justin Trudeau.

No arrests or outbreaks of violence were reported at the protests. Ottawa police are reportedly investigating reports of antisemitic displays and vandalism, including the desecration of Canada’s National War Memorial and other public monuments.

Trudeau has been a consistent target of anti-mandate and anti-COVID restriction protests, and recently dubbed the convoy as being representative of a "small fringe minority." Trudeau, who was reportedly moved to a secret location Saturday amid the protests, said Monday that he would not meet with representatives of the convoy.

As of Jan. 22, truckers who cross the Canadian-U.S. border are required to be vaccinated against COVID-19. The country’s minister of transport said this week that roughly 90% of Canadian truckers crossing the border are already vaccinated; roughly 78% of all Canadians are fully vaccinated.

A convoy spokesman said the convoy was over 43 miles long, and others say over 50,000 truckers participated. The exact length and number of participants are unclear and have been disputed by some left-rated fact-checkers (as you’ll see below); the world record for the longest truck convoy is roughly 4.5 miles. As of Monday, a GoFundMe donation account set up to help the convoy has raised over $9.3 million.

Right-rated sources focused much more on the convoy than left- and center-rated sources, and often framed it as representative of a growing global skepticism of COVID-19 vaccine mandates and public health rules. Reports from left-rated outlets often framed the convoy as careless in the face of continued public health risks and potentially aligned with dangerous far-right political movements.

Coverage of the Freedom Convoy and the ensuing protest in Ottawa once again displays the need to use multiple news sources. One side consistently framed the movement as dangerous, smaller than believed, and akin to the Capitol riot, while the other side focused on voices of supporters and its purported large size. Either one-sided view would leave you with an incomplete understanding of the convoy, and  would likely polarize your perception of the “other side.”

There’s no such thing as unbiased news. Use the AllSides Media Bias Chart™, Balanced Search and balanced news feed to get a healthy news diet from across the political spectrum.