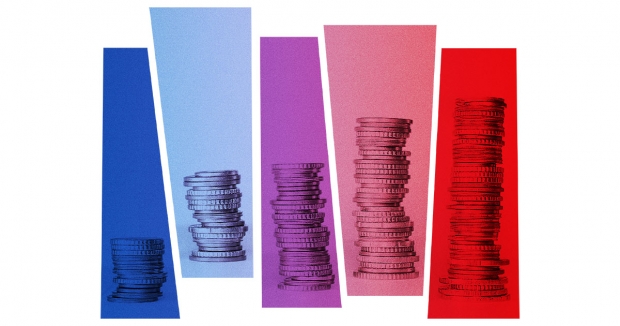 With the debt ceiling deadline pushed back to December, Democrats now have more time to iron out their differences on a large spending package that could include universal pre-K, two years of free community college, Medicare and Medicaid expansions, prescription drug reform, a child tax credit, paid family leave, affordable housing, climate change investments, and more. The bill was previously billed at $3.5 trillion over ten years. But how much is that, exactly?

What difference would it make if Democrats instead backed a $2 trillion or $1.5 trillion bill, as centrist Democratic Senators Kyrsten Sinema and Joe Manchin (collectively referred to by some political journalists as “Manchinema”) have called for? What would all that money even pay for?

People naturally have a hard time conceptualizing large numbers like these, so many news outlets discussed Democrats’ plans in abstract terms. Many outlets across the spectrum described the large topline cost with adjectives like “massive.” It wasn’t entirely the media’s fault, since Senate Democrats still have yet to come to a consensus on even basic aspects of the bill. Without an official title and in the face of a wide array of potentially included programs, most reporters took to calling the proposal “Democrats’ $3.5 trillion budget reconciliation bill.”

That is, until early October, when some Democrats started objecting to the media’s focus on the topline ten-year price tag. In a Sept. 30 interview with Fox News (Right), New York Rep. Alexandria Ocasio-Cortez said there were “a lot of games being played” with the $3.5 trillion ten-year number, arguing that the average $350 billion per year should be compared to the recently-passed $768 billion 2022 defense budget.

It wasn’t just AOC; many center- and left-leaning political journalists and outlets began writing about how the cost of the “$3.5 trillion bill” was being purportedly overstated or oversimplified.

The Intercept (Left) ran the headline “$3.5 Trillion for the Build Back Better Agenda Is Much, Much Less Money Than You Think.” The Hill (Center) ran an opinion headline titled “Budget reconciliation: Calling it a '$3.5 trillion spending bill' isn't quite right.” An article in Forbes (Center) made the case for “Why Focusing On The Reconciliation Bill’s Price Tag Is A Bad Idea, In Four Examples.”

Meanwhile, many center- and right-rated sources took the opposite stance, arguing that the bill would cost much more than $3.5 trillion.

One Washington Examiner (Lean Right) writer suspected that those disputing the bill’s size were part of a new Democratic Party messaging strategy. The Wall Street Journal Editorial Board (Lean Right) called the “gargantuan” $3.5 trillion number “phony” because it did not factor in additional costs. The nonpartisan Committee for a Responsible Federal Budget (CRFB) wrote in July that the “True Cost of Budget Plan Could Exceed $5 Trillion.”

So, what’s really going on with this bill? Let’s get into it.

Does “$3.5 Trillion” Overstate the Cost?

In the Intercept article cited above, Jon Schwarz argues that the news media committed an “act of true malfeasance” by not framing the “$3.5 trillion” bill in comparison to “the most relevant metric,” the size of the U.S. economy. Under this framing, Schwarz says, the bill would account for 1.2% of U.S. GDP on average over ten years.

Schwarz also specifically calls out NPR (Center), The New York Times (Lean Left), The Washington Post (Lean Left), and The Wall Street Journal (Center) for not including the ten-year timespan in their coverage.

In The Hill, opinion contributor Robert Greenstein argues that the “$3.5 trillion” figure is simply inaccurate. Greenstein points out that the “$3.5 trillion” figure does not take into account the bill’s “offsetting savings,” such as prescription drug savings or tax increases. The “net price tag” of the bill, which includes these offsetting savings, was capped at $1.75 trillion by Congress in late August.

Greenstein also argues that without offsetting savings, Republicans’ 2017 tax cuts would have been described as costing over $5 trillion, not $1.5 trillion like many in the media said at the time.

In its article titled “$3.5 Trillion Is a Phony Number,” the WSJ Editorial Board calls the bill “one of the greatest fiscal cons in history.” The article points out that the child tax credit alone would cost $1.1 trillion through 2025, at which point it could be continued at a cost of $110 billion per year. It also highlights how the bill is branded as “saving” $420 billion over ten years by delaying the phase-in of dental Medicare coverage to 2028, after which costs would rise.

Additionally, universal child care is given $90 billion, but only through 2027. Some of the costs for universal pre-K and community college are also shifted to states over time. The article also focuses on how states may have to cover large costs associated with the budget plan and points out that “Initially the feds would pick up 100% of the cost, but Washington’s share would decline to 60% by 2028.”

Of the media coverage of the bill, the WSJ Editorial Board says, “The press has reported almost none of this, which is how Democrats like it.” It also cites the previously mentioned CRFB report claiming the “real cost” of the bill would be between $5 trillion and $5.5 trillion, if certain parts of the bill remain.

The CRFB’s report argues that while “our initial estimates involve a degree of uncertainty,” policymakers cannot fully and permanently fund all of the proposed programs for $3.5 trillion over ten years; essentially, the math doesn’t add up. To fit the bill into the $3.5 trillion price tag, CRFB says, Democrats have set program funds to expire at various times within the next ten years.

CRFB also states that Republicans were “rightly criticized” for using this “budget gimmick” for some of the 2017 tax cuts.

In Forbes, senior contributor Elizabeth Bauer argues that it is a “mistake” to present the bill as “as a mass of undifferentiated spending” that may benefit or harm the economy. For Bauer, the issue isn’t with the price tag or the bill’s goals — many of which she agrees with — but with the way the bill’s programs would be implemented.

“Absolutely none of these programs should be passed by means of a Reconciliation bill,” Bauer concludes, adding that such particulars would be “passed without the American public, and possibly even Congress itself, knowing the first thing about them, because the sum total of the discussion is about the pricetag.”

Bauer turned out to be right — a recent CBS poll found that “the public is more likely to have heard about what [the bill] would cost than about the specific policies that would be in it.” Only 10% of poll respondents said they knew “a lot of the specifics” of the bill, with 57% saying they didn’t know any specifics.

In a way, the news media had its hands tied. Without a proper name for the bill — some have started calling it the “Build Back Better” bill — writers had to come up with a concise way to talk about the bill. They were left with its three defining attributes: Democrats created it, it was said to cost $3.5 trillion, and Democrats needed to use budget reconciliation to pass it. So, “Democrats’ $3.5 trillion budget reconciliation bill” was born.

Systemic factors also contributed to the “$3.5 trillion” label. Partisan politics created a divided Congress and incentivized party loyalty. With a 50-50 split in a Senate that Republicans need fewer voters to control, Senate Democrats know they have a limited time to pass their preferred agenda before Republicans retake their majority. Additionally, President Joe Biden’s low poll numbers threaten to drag down Senate Democrats’ performance in the 2022 midterms. Furthermore, Democrats only have one chance this fiscal year to use budget reconciliation to pass a bill without the threat of a filibuster, which currently requires the votes of ten Republicans who don’t support Democrats’ agenda. That’s why Democrats are trying to pass as much as they can in one bill in a relatively short time frame.

Politics has become rushed, media coverage has become oversimplified, and ignorance has thrived.

Be Part of the Solution

Understanding the complexity of stories like this one is what AllSides is all about! That’s why we support getting your news from a wide range of sources, which you can do with our Headline Roundups and Balanced News Feed.

What Democrats want to put in the bill:

The Guardian (Lean Left): What’s actually in Biden’s Build Back Better bill? And how would it affect you?

How current negotiations are changing the bill:

Biden’s claim that the bill would add “$0” to the budget deficit:

CATO Institute (Lean Right): No, the $3.5 Trillion Spending Bill Does Not Cost $0

This piece was written by AllSides Daily News Editor Joseph Ratliff. He has a Lean Left bias.