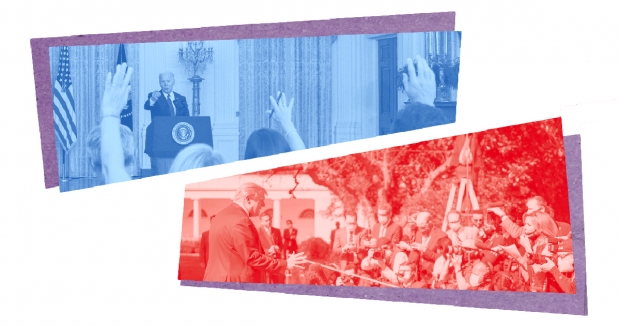 Photos via The White House. Illustration created by Joseph Ratliff.

An opinion article published Dec. 3 by the Washington Post (Lean Left bias) argues that President Joe Biden suffers from press coverage that is as negative as the media’s treatment of former President Donald Trump, and at times, even worse.

The writer’s argument, conclusion and methods prompted split reactions and debates about media bias across the spectrum.

The column, titled “The media treats Biden as badly as — or worse than — Trump. Here’s proof,” was written by longtime Post writer Dana Milbank (rated as Left by AllSides). At Milbank's request, an information and analytics company called FiscalNote analyzed over 200,000 news articles from 65 news websites to compare coverage of the two presidents. You can download the results here.

Milbank said the results confirmed his fear: that "Biden’s press for the past four months has been as bad as — and for a time worse than — the coverage Trump received for the same four months of 2020."

But is this accurate? AllSides identified issues with the experiment and other factors that contradict Milbank’s argument.

Analysis of the Report

Does the data really show that the media treated Biden the same or worse than Trump, as the headline states? A closer look at the numbers appears to say the opposite.

The one month that really stands out is August, when Biden’s media coverage was rated a very low -0.07. For the three months after that, Biden’s coverage averaged the same as Trump’s during that time the year earlier. August is also when Biden's approval rating turned negative, where it has remained since.

So what happened in August 2021 for Biden? The month started and continued with Congress failing to pass Biden’s infrastructure bill and budget — a problem that continued after August. Then things really shifted mid-month over Biden’s pulling troops out of Afghanistan. The negative coverage continued throughout the month with revelations that Biden overruled military and other advisors to speed the pullout, and with the suicide bombing that killed 13 U.S. service members at Kabul’s airport.

So while the coverage of Trump for the year was more negative than coverage of Biden, a big shift in negative coverage about Biden during August seems plausible.

Ironically, a more balanced review of news coverage that included more Right-rated sources might have shown more negative coverage of Biden, which would have supported the author’s conclusion.

The analysis also looks at different time periods of Trump’s and Biden’s presidencies that don’t necessarily correlate. For instance, would it have made more sense to compare both of their first years in the Oval Office? Or because the themes of 2020 and 2021 were similar, was it appropriate for the analysis to be just one year apart? Answers to these questions represent subjective judgments.

So what did the author and others across the spectrum take away from the analysis?

Milbank explains why Trump deserves more negative coverage than his predecessor, highlighting how Trump “presided over a worst-in-world pandemic response that caused hundreds of thousands of unnecessary deaths; held a superspreader event at the White House and got covid-19 himself; praised QAnon adherents; embraced violent white supremacists; waged a racist campaign against Black Lives Matter demonstrators; attempted to discredit mail-in voting; and refused to accept his defeat in a free and fair election.”

He continues: “Sure, Biden has had his troubles, with the delta variant, Afghanistan and inflation. But the economy is rebounding impressively, he has signed major legislation, and he has restored some measure of decency, calm and respect for democratic institutions.”

The article ends with a plea to journalists: “Too many journalists are caught in a mindless neutrality between democracy and its saboteurs, between fact and fiction,” Milbank writes. “It’s time to take a stand.”

Reactions from The Left

Democrats and journalists for left-rated media outlets seemed to agree with Milbank's analysis.

Derek Thompson, staff writer at The Atlantic (Lean Left bias), came to two conclusions after reading Milbank’s data. One is that “there's a very successful GOP propaganda machine with no full equivalent on the left, which sets a floor of positive coverage for GOP presidents.” Secondly, “the non-conservative news media has a negativity bias and overreacts to bad news.

New York University journalism professor Jay Rosen echoed Milbank’s conclusion about the state of the media. “Here and there — and far more slowly than is needed,” Rosen said on Twitter, “this view is catching on among journalists: that they have to become more actively pro-democracy.”

Reactions from the Right and Center

Other voices and journalists across the political spectrum, especially those on the right, pushed back on Milbank's argument and the data behind it.

Writing for National Review (Right bias), Charles C.W. Cooke argued that Milbank’s argument is invalidated by his reliance on algorithms and failure to capture the human element of news-reading. “There is a reason that Milbank’s piece provoked such hysterical laughter upon publication,” writes Cooke, “and that reason was that its readers were people, who were in possession of sophisticated brains.”

Writing for Washington Examiner (Lean Right bias), senior commentary writer Becket Adams argued that Milbank’s data “is an amazing rationalization of his own partisanship and that of the broader media.” He notes that the data only measures “differences in neutrality in tone,” while omitting the “unflattering Biden stories that major newsrooms either downplay or ignore” such as the Hunter Biden laptop story and the Arlington Cemetery photoshoot.

On Twitter, data journalist Nate Silver of FiveThirtyEight (Center bias) called the algorithm Milbank used "extremely bad." He argued that the experiment took some words out of context, thereby skewing the results. “I don't think it reflects some sort of bias if Biden's approval rating drops 5 points and the news outlet writes about that, and the framing is mostly negative,” Silver said.

Is Milbank’s argument biased? Yes, probably because everyone is biased. That shouldn’t be a surprise, and it’s easy to get around those biases by consuming balanced news and perspectives.

What about the AI methods for doing it? Does it “measure the negativity with precision,” as Milbank writes? Or is it “complete crap” as Silver says?

To start, algorithms and AI are very hard to understand unless you closely study them for work or as a hobby. The most influential algorithms, like the ones used by Google or your favorite social media platforms, are also some of the least transparent.

The use of artificial intelligence in journalism, both to report and analyze bias, represents the future. However, its present condition is unstable, and any journalistic use of it deserves close scrutiny.

Milbank himself later said as such. During a CNN (Left bias) broadcast, he withdrew some of his confidence about the analysis when questioned by host Brianna Keilar, saying that “it wasn’t foolproof” and that he trusted it “somewhat.” And as we said before, the analysis didn’t look at a balanced range of media outlets across the spectrum.

At the end of his Twitter thread examining Milbank’s article, 538’s Nate Silver argued that news consumers “should be extremely wary of statistical methodologies you don't understand but that confirm your priors.”

We at AllSides would agree. Whether this data is “accurate” or not, there is not enough transparency around Milbank’s methodology or the algorithms used to conclude that the media was truly as biased or more biased against Biden than it was against Trump.

AllSides is very open about how we create our news. Use our balanced newsfeed and Balanced Search tool to see a wide breadth of perspectives, and please consider supporting our mission.

Antonio Ferme is AllSides’s Weekend News Editor. He has a Center bias.

John Gable is AllSides’s co-founder and CEO. He has a Lean Right bias.