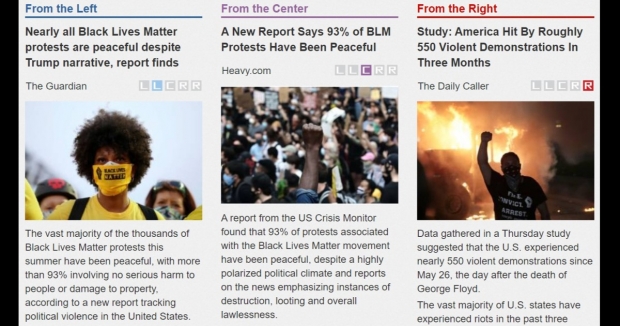 AllSides provides balanced news to help you to get the full story, spot media bias and misinformation, avoid partisan manipulation, and think for yourself.

What Are Headline Roundups?

Headline Roundups are one of the staple offerings of our balanced news operation here at AllSides. We show you three headlines side-by-side from sources we have rated on the left, center, and right, and include a short summary of the issue. Sometimes, we include three different viewpoints or opinions on a top issue. Other times, we show you three different news reports.

By comparing coverage across the political spectrum, you can see what information you may have missed or notice how journalists and commentators spin, slant or sensationalize the same story.

Headlines Roundups are an immensely powerful news consumption tool, and we put a lot of thought and time into making good use of them. Here’s how that works.

Why Does the Order of Left, Center, and Center Headlines Rotate in AllSides Headline Roundups?

We rotate the order of the left, right, and center stories in our Headline Roundups to avoid biasing our coverage in favor of the left, which otherwise would always be listed first — and read by people more often. In addition, we think it is good to require people to actually read headlines, instead of just skimming and assuming they know what each side will say.

Our goal is to be unbiased, and rotating the order helps us to achieve that. We also hope to inspire critical thought about what is in the news. We appreciate that this can sometimes seem confusing, so further down the homepage, we do display a standard Left-Center-Right headline order that doesn't change.

The Process of Making an AllSides Headline Roundup

How exactly does AllSides put Headline Roundups together? Who writes them? Why do some stories get covered and others don’t?

The AllSides news team — made up of a managing editor, a news editor and two daily news specialists who have biases across the political spectrum — curates and writes around 20 Headline Roundups each week, including 3-4 per day on weekdays. This small group is politically balanced and has members who identify as being on the left, right and center.

Every day, the Headline Roundup creation process begins with a basic but essential question: What is the most politically-relevant news today for you, our audience?

We know you have a wide range of interests — politics, media bias, civility, polarization — but we also believe that what might be the most important information for you to know isn’t always what’s most clickable, viral or “interesting.”

With that in mind, our daily news team covers a wide range of stories, from big national news that's being covered across the spectrum, to niche perspectives and specific examples of bias or underrepresentation. The goal is to make you more informed, more engaged in the civic process, and more prepared to interpret and interact with viewpoints that differ from your own.

Typically, we reflect the top stories that news outlets are covering, whether it’s a story throughout the political media or only in one sector. But sometimes, we’ll select a story that isn’t necessarily a top news item, but is still something we think you should know more about.

To choose the subject of a Headline Roundup, we first gauge the day’s events by browsing dozens of news sources from across the spectrum and social media platforms. We seek to reflect the top news of the day based on how media on all sides of the spectrum are covering it.

We evaluate how much (or how little) different subjects have been covered across the media; what’s polarizing people that day; if there are split narratives about any subjects; and how relevant the subjects are to you, our audience. Either the subject is something you probably already know about and could use more info on … OR it’s something you maybe haven’t seen, but probably should.

There are plenty of stories we don’t cover with Headline Roundups. Our bandwidth is limited, which holds us to a fixed amount of Roundups per day. Many stories probably warrant this sort of comparison, but we simply can’t get to all of them.

If we choose to cover something with a Roundup, it means either it was strongly covered by the news media, or it’s a politically-relevant subject that we think you need to know more about.

While we provide balanced news, we believe everyone is biased — including us. It is important to be transparent about bias, so we spell out some of our focus in our Editorial Philosophy. We typically focus or shine light on:

Sometimes we cover something that’s big news in one specific “news orbit,” but not big in others. Though it might not be big news everywhere, we’ll still cover it to make sure you get the full picture and round out your understanding of the issue at hand.

After we settle on a subject, we browse our 800+ AllSides Media Bias Ratings for three sources that have published articles about it, typically from three different points on the political bias spectrum (sometimes, one side will be ignoring the issue or not giving it prominent coverage, while it is a huge story on the other side of the aisle). We try to use different sources for this each day. If a source is known for focusing on whatever subject we’re seeking to cover, we’ll likely look to that source first.

With these three articles, we seek to accurately represent how opposite sides of the media are discussing or framing a subject while also highlighting interesting, polarizing or underrepresented points of view.

If only one source or voice out of many is advancing a certain narrative, we might make note of it, but we’ll also avoid representing an entire side of the media with a single outlier.

There are times when a story hasn’t been covered at all by one side of the media, but is being covered a lot by another side. In this case, we’ll sometimes publish a “lopsided” Headline Roundup that only features articles from one or two sides of the media instead of one article each from left, right and center. When this happens, we’ll describe the coverage disparity and will strive to make updates if more coverage comes out.

Once we’ve found the subject and evaluated the coverage of it, we write our brief summary.

This is only meant to give the essential facts — what’s going on, who’s involved, and where the news media, talking heads and public figures seem to fall on it. We typically explain any divisions in news coverage, or prominent/misleading/overwhelming narratives about the subject.

If the story is centered around a piece of controversial content — a Senate bill, a video of the president, an audio clip of a police interaction —  we’ll link to the primary source material in the summary, so you can evaluate the original content for yourself. We also typically try to explain any divisions in news coverage or misleading narratives about the subject.

If we make a mistake in the summary, we’ll go back and change it. If it’s a factual error or misleading piece of information, we’ll affix an Editor’s Note explaining what happened.

Balanced News is the Priority

There’s only so much our small team can do, and we’re far from experts on everything. We typically aren’t fact-checking stories or telling you who is right or wrong. Our goal is to provide you an easy way to get a breadth of information, so you can decide for yourself.

Our Headline Roundups can act as your total daily news consumption, or as a starting point to go much deeper on an issue on your own. This small dose of journalism and curation we do each day is intended to give you just enough information without overwhelming you or adding stress. Plus, studies show that engaging with different perspectives through the news can actually help to lower anxiety about politics and polarization.

If you ever have feedback on a Headline Roundup, reach out to us on social media or email feedback@allsides.com. Thanks for reading!