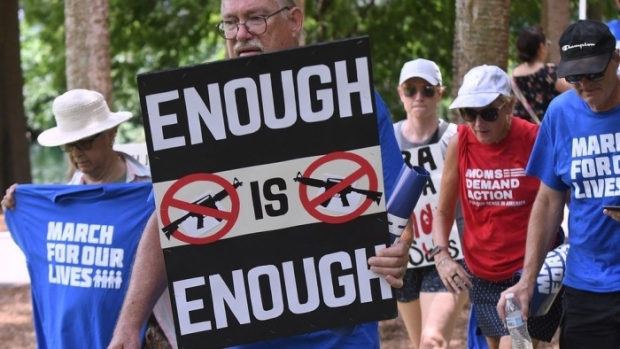 A bipartisan group of senators announced Sunday that they struck a deal on a framework for new gun safety legislation. The proposal includes enhanced background checks of buyers under 21, funding for mental health and school safety resources, and grants for states to enforce "red flag" laws.

Several key Republicans, such as Senate Minority Leader Mitch McConnell, support the framework. Many Democrats have acknowledged that while the proposal doesn't meet all of President Joe Biden's requests, the legislation would be the most significant gun safety measure in decades.

Many voices across the spectrum support the details of the bill, such as more background checks and red flag laws, and polls from both left and right suggest majority support for stricter gun laws among the U.S. public.

Some on the right remain opposed to red flag laws; they worry that laws allowing officials to seize guns may be used by a corrupt government to disarm dissenters. Others argue that the bipartisan bill represents over-criminalization instead of meaningful reform.

Voices on both sides have also cautioned against over-celebrating the bill before having time to measure its impact. Some voices on the left said the bill represents meager and insignificant progress that suggests our true divides on guns are insurmountable. Some on either side oppose compromising with each other on anything, and see each other as a danger to society.

"These are the first gun safety laws to receive bipartisan support of this kind in decades, with previous attempts by Democrats for strengthened controls frustrated by Republicans. Attempts to tighten the laws in the wake of a previous school shooting at Sandy Hook in Connecticut nearly a decade ago - in which 20 children and six adults were killed - failed to get the required votes in Congress."

"42 percent named 'crime or gun violence' as one of the most important issues facing the country, up 19 percentage points from the first wave of the poll released in early May. This was by far the largest increase for any one issue we asked about, putting it behind only 'inflation or increasing costs' as Americans’ top concern for the country."

"On specific gun proposals, voters are most supportive of requiring background checks on all gun buyers (88%) and improving enforcement of existing gun laws (84%). Another 8 in 10 favor raising the legal age to buy assault weapons to 21 (82%), passing "red flag" laws that allow police to take guns from people shown to be a danger (81%), background checks on buying ammunition (80%), mental health checks (78%), and raising the legal age to buy any gun to 21 (78%)."

"Letting politicians implement restrictive laws to address social dysfunction their policies created is like hiring a pest control company to eliminate rats it released into your house. Instead of handing them more authority, we should reduce their power in order to relieve social pressures that breed violence. And we need to revisit criminal justice reform. That doesn't mean the delusional kind that ignored crime, but instead means legalizing victimless activities, holding cops accountable, and focusing on true threats to life, liberty, and property."

"Senate negotiators instead worked to reach consensus on a more tailored plan that would overcome the 60-vote threshold for legislation to advance. Both the president and Senate Majority Leader Chuck Schumer have said they support the framework. While McConnell would not weigh in on raising the age to buy semi-automatic weapons, he said enhanced background checks for gun buyers under 21 is a 'step in the right direction.'"

How the Bipartisan Gun Bill Could Still Fall Apart

"The two planks that will be most delicate to draft are the closure of the 'boyfriend loophole' and the grants for state “red flag” laws. Both make Republicans susceptible to arguments from gun-rights groups, and their base, that they’re infringing on Second Amendment rights, and that “red flag” laws sidestep due process laws by not requiring the person to be present in court."