In an address from the White House Thursday night, President Joe Biden called on Congress to pass stricter gun laws.

"How much more carnage are we willing to accept," asked Biden, referring to recent mass shootings in Uvalde, Texas, Buffalo, N.Y. and Tulsa, Oklahoma. "I support the bipartisan efforts that include a small group of Democrats and Republican senators trying to find a way," he continued. "But my God — the fact that the majority of the Senate Republicans don’t want any of these proposals even to be debated or come up for a vote, I find it unconscionable."

Biden said lawmakers should reinstate the federal ban on "assault weapons," which would include AR-15s, and asked "Why in God’s name should an ordinary citizen be able to purchase an assault weapon that holds 30-round magazines, that lets mass shooters fire hundreds of bullets in a matter of minutes?" The president also called on Congress to pass red flag laws and laws strengthening background checks, and to removing gun manufacturers' immunity from liability. He also urged action on mental health, such as providing more school counseling and mental health services.

News sources across the political spectrum covered the speech prominently and provided full quotes from the president. Some coverage from the right highlighted Biden's call for gun manufacturers to be held accountable for mass shootings that involve weapons they produce. Some reports from the left highlighted Biden's criticism of Republicans who oppose his vision for stricter gun laws. 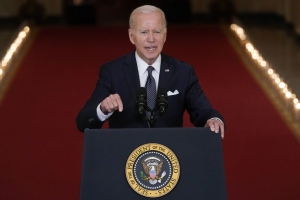 President Biden on Thursday made an emotional appeal for ambitious new gun laws including a ban on military-style rifles, as lawmakers wrangled bitterly over how to prevent more bloodshed in America.

In an address to the nation, the president prodded Congress that “it is time to act” and repeatedly declared “enough” about the slaughters in schools and other mass shootings that have become all too routine in the U.S.

If Congress would not ban assault weapons outright, Mr. Biden said the least lawmakers could do would be to raise the age of purchase for...

Read full story
Some content from this outlet may be limited or behind a paywall.
See full media bias rating for Washington Times
From the Center
1046
Gun Control and Gun Rights
Biden calls on Congress to reinstate Federal Assault Weapons Ban
Axios 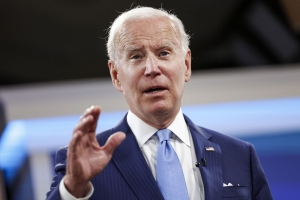 President Biden laid out his gun control agenda on Thursday night, saying America should be unified around the provisions he suggested.

The big picture: Biden called on Congress to reinstate the Assault Weapons Ban, which was passed in 1994 and expired under President George W. Bush in 2004. He also called for expansions on background checks, raising the age limits to purchase semi-automatic rifles and red flag laws.

Biden added there should be a ban on certain semi-automatic rifles and high-capacity magazines.

Other recommendations from Biden included:

Raising the age to purchase semi-automatic rifles from 18 to... 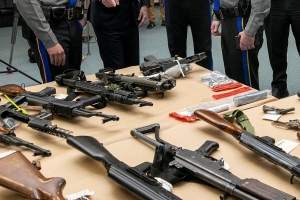 “Enough,” Biden said repeatedly, invoking the dozens of school shootings that have swept America over the past decade. “We can’t fail the American people again.”

Biden delivered his 15-minute speech, informed by his recent trips to both Buffalo and Uvalde, Texas, from the East Room of the White House after walking down an aisle...