On Sunday, thousands of Cubans marched to protest food shortages and the country's lack of COVID-19 vaccines. Chants of "freedom" could also be heard, leading some to speculate that protesters were speaking out against Cuba's communist government.

In a country that surveils dissidents and has tight police control, democratic protests are uncommon. The Biden administration is supporting the Cuban peoples' right to peaceful assembly; some in Cuba say the U.S. and social media enabled the uprising. Many right-rated media outlets are framing the protests as anti-communist. Updated 7/12/21 at 12:46 p.m. ET with more detail on protester's intentions and media bias around the story.

'We are no longer afraid': Thousands of Cubans protest against conditions on island
NBC News (Online) 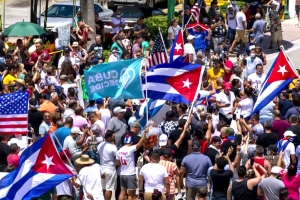 Thousands of Cubans took to the streets of multiple provinces around the Caribbean island this Sunday in an unusual protest in which civilians shouted slogans against the communist government such as “We want freedom” and “We are no longer afraid.”

The demonstrations come at a time when Cuba faces the worst economic crisis since the fall of the Soviet Union, an increase in repression against political opponents and a strained health system during a critical stage of the COVID-pandemic. Health authorities reported almost 7,000 new cases and 47 deaths —... 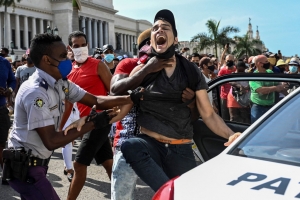 Cuba’s communist regime is trying to blame the US for the huge uprising against its totalitarian government — as it also calls on “revolutionaries” to take to the streets and “fight” any anti-government protesters.

On Sunday, thousands took to the streets in cities and towns across the long-suffering nation, screaming “freedom” and “enough” — as well as anti-government slogans and demands for the removal of President Miguel Díaz-Canel.

The dictatorship responded with a huge police presence, dispatching special forces jeeps with machine guns mounted on the back.

Dozens of demonstrators were arrested... 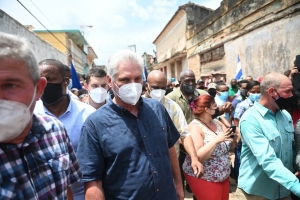 Thousands of Cubans took to the streets in a wave of demonstrations in Havana and at least 14 other cities throughout the Communist island, demanding an end to the 62-year dictatorship and protesting the lack of food and Covid-19 vaccines.

The protests are unprecedented in a country with tight police control and surveillance on dissidents, analysts say.

In a televised address on Sunday, President Miguel...