Like busing migrants voluntarily to Washington D.C., the inspections were part of Abbott’s response to the Biden administration ending fast-tracked deportations under Title 42. According to a CBP estimate, some trucks have had to wait over five hours to cross the border. On Monday and Tuesday, Mexican truckers blockaded the Pharr–Reynosa International Bridge to protest the inspections. On Wednesday, Abbott announced that he would end inspections at another border crossing because the governor of the Mexican state of Nuevo León agreed to increase security on his end.

Abbott, who faces a 2022 election challenge from Democrat Beto O’Rourke, has said the inspections were needed to secure the border in the absence of Title 42. Others, including O’Rourke and White House press secretary Jen Psaki, have raised concerns that the border backups would hurt Texas businesses and exacerbate inflation. 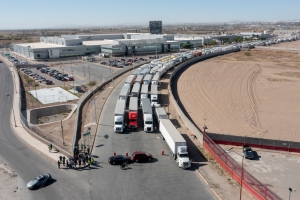 The new policy, announced last week, has led some truckers to remain snarled in traffic for more than 30 hours, prompting desperate pleas from fruit and vegetable importers, the auto industry and other executives who said their products are being caught up in a political standoff.

Read full story
Some content from this outlet may be limited or behind a paywall.
See full media bias rating for Washington Post
From the Right
6497
Trade
Texas Gov. Abbott vows to continue truck inspections until Biden, Mexico move to secure border
Fox News (Online News) 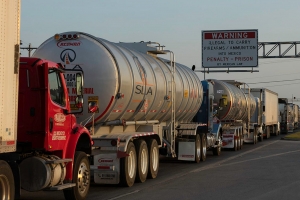 Texas Gov. Greg Abbott is vowing to continue the truck inspections that have snarled traffic at the Texas-Mexico border until there is action from both President Biden and Mexican officials to stem the ongoing migrant crisis at the southern border.

Abbott spoke Wednesday as he signed a memorandum of understanding with the governor of Nuevo Leon that would see inspections stopped at the bridge in Laredo in return for what he called "enhanced border security enforcement measures" at the ports of entry and along the Rio Grande from Nuevo Leon. 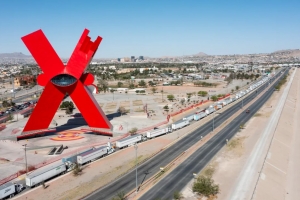 But truckers continued to wait hours to cross at the Ysleta and the Bridge of the Americas ports of entry in El Paso.

Biden is considering lifting Trump-era tariffs to slow inflation. Here's how that may affect you
CNN (Online News)