The bus pulled up to a D.C. building that houses Fox News (Right bias), NBC News (Lean Left) and C-SPAN (Center bias) offices before dropping the migrants off a few blocks from the U.S. Capitol building. According to the Daily Beast (Left bias), some of the roughly 30 migrants said they were from Colombia, Cuba, Nicaragua, and Venezuela.

Abbott, a Republican running for reelection against Democrat Beto O’Rourke, announced the plan to transport migrants voluntarily to D.C. and “other locations” on April 6 after the Biden administration said it would end fast-tracked deportations under Title 42 on May 23. Abbott said the decision was necessary to keep state resources from being “overwhelmed” by a surge of migrants; O’Rourke dismissed the program as a “stunt” but has joined other border state Democrats in criticizing the Biden administration for ending Title 42 without an apparent plan.

Political divisions were clearly visible in coverage across the spectrum; a Daily Beast article called Abbott's plan “cruel,” and a Fox News homepage tagline called it a “Special Delivery.” Right-rated outlets often used the term “illegal immigrants” and focused on border security issues; left-rated outlets tended to use terms like “undocumented migrants” and focused more on the migrants' experience. 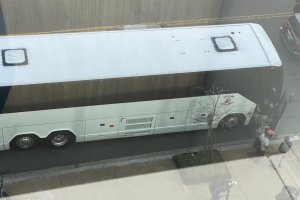 Texas Gov. Greg Abbott followed through on his cruel promise to dump asylum seekers and migrants in the capital with the first busload conveniently arriving outside Fox News’ office on Wednesday morning.

Abbott vowed last week to bus them to the Capitol steps in response to the Biden administration’s decision to end Title 42, a pandemic-era emergency order implemented by Donald Trump that allowed migrants to be sent back to Mexico at the border, even if they were seeking asylum.

Read full story
Some content from this outlet may be limited or behind a paywall.
See full media bias rating for Daily Beast
From the Center
317
Immigration
Bus with migrants sent by Texas governor arrives in DC
The Hill

A bus carrying migrants from Texas arrived in Washington, D.C., on Wednesday morning after Texas Gov. Greg Abbott (R) last week announced plans to send them from his state’s southern border to the nation’s capital.

Fox News anchor John Roberts tweeted a picture of the bus parked outside the building that houses the network’s bureau on Capitol Hill and that of several other news outlets on Wednesday morning.

Abbott said during a press conference last week the migrants would be voluntarily sent to Washington so that President Biden could “immediately address the needs of the people that... 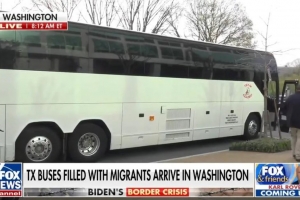 A bus from Texas carrying dozens of illegal immigrants arrived in Washington, D.C., on Wednesday morning, allowing passengers to disembark just blocks away from the U.S. Capitol, according to a Fox News report.

Governor Greg Abbott (R-Texas) announced last week that he directed the Texas Division of Emergency Management (TDEM) to "charter buses and flights to transport migrants who have been processed and released from federal custody to Washington, D.C.," in response to the Biden administration's plan to rescind Title 42.