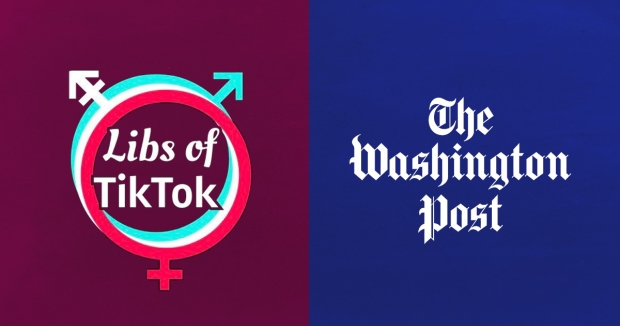 Did a Washington Post journalist unfairly dox the woman behind the Libs of Tik Tok Twitter account, or did they merely do their job by exposing influential and potentially harmful political actors?

On Tuesday, Washington Post (Lean Left bias) technology reporter Taylor Lorenz stirred controversy by publishing an article in which she revealed the name of the woman behind @LibsofTikTok, a popular conservative Twitter account that has been amplified by prominent figures such as Fox News’ Tucker Carlson (Right bias), podcaster Joe Rogan, and Florida Gov. Ron DeSantis’ press secretary.

Some, especially on the right, argued that the Washington Post’s expose was unfair and constituted “doxxing,” which is the act of publicly revealing private personal information about a person or organization online. Conservative activist and Human Events (Lean Right bias) senior editor Jack Posobiec accused the outlet of “doxxing and smearing” the account holder.

This isn’t journalism. This is doxxing and smearing of @libsoftiktok by the billionaire-controlled Bezos Post https://t.co/uEtuA1Q61H

Meanwhile, Lorenz and others defended the article, arguing that an influential account that purportedly directs harassment to LGBTQ folks is worthy of exposition.

Here's a piece of good, old-fashioned shoe-leather reporting that examines the role of an increasingly powerful figure in conservative media, revealing the human behind an anonymous account that directs waves of hate and harassment at ordinary LGBTQ folks. https://t.co/cTQYil8jO3

Are the right’s accusations of “doxxing” accurate? Or was Lorenz justified in publishing the @LibsofTikTok creator’s name?

Let’s get into it.

@LibsofTikTok is a Twitter account with more than 658,000 followers (though it has gained more after the Washington Post exposé) that reposts TikToks and other social media posts from leftists, liberals and LGBTQ people, often framing them as crazy, sexually deviant or predatory.

In the months leading up to the Washington Post article’s publication, the account has increasingly focused on LGBTQ people and sex education in schools. The posts often include commentary like, “Any teacher who utters the words ‘I came out to my students’ should be fired on the spot” and “We have a serious groomer teacher problem in this country.”

The perception of an encroaching threat of “groomer” teachers can be seen in Florida’s Parental Rights in Education law, which bans classroom instruction on gender identity and sexual orientation until after 3rd grade, and bans such discussions for later grades “in a manner that is not age-appropriate or developmentally appropriate.” Christina Pushaw, Florida Gov. Ron DeSantis’ press secretary, was one of the first to label such discussions as “grooming”. She said @LibsofTikTok “truly opened my eyes” on LGBTQ discussion in schools.

Lorenz’s article notes the account’s “deep and far-reaching” impact, arguing that its influence extends far beyond its 648,000 (now 738,600) followers. To support this, Lorenz discusses how prominent figures like Joe Rogan and Laura Ingraham had promoted the account to millions of viewers. Furthermore, Lorenz adds, “Fox News hosts Jesse Watters and Tucker Carlson began featuring content straight from Libs of TikTok on air.”

Lorenz writes that “the popularity of Libs of TikTok comes at a time when far-right communities across the Internet have begun doxxing school officials and calling for their execution” and highlights a former Oklahoma English teacher who received death threats after @LibsofTikTok featured a video in which they said they loved and were “proud” of LGBTQ kids who were shunned by their parents.

According to the Post, the account is run primarily by a Brooklyn realtor who attended former President Donald Trump’s Stop the Steal rally on Jan. 6, 2021.

Reactions to Taylor Lorenz’s Article: Did She ‘Dox’ @LibsofTikTok?

Definitions of “doxxing” vary, but they generally involve publishing “private or identifying information” about someone who wishes to remain anonymous on the internet. To this extent, yes, The Washington Post published the name of @LibsofTikTok’s creator, and she had previously taken steps to conceal her identity.

Some argue doxxing is only when information that wasn't previously public is made public to target someone; others would say doxxing can include the amplification of someone's personal information by an influential/major source, regardless of whether it was already publicly available.

The Washington Post released a statement saying that Lorenz’s “reporting methods comport entirely with The Washington Post’s ethical standards” and that “we did not publish or link to any details about her personal life.” Libs of Tik Tok called this “LIES,” and claims that the initial report included a link to her real estate license that contained her personal address. The link, which led to the woman's license page on Licensee.io, was removed a few hours after publication but is accessible through the Internet Archive.

Arguments on the Right: Yes, It Was Doxxing

While it was relatively easy to find the name behind the account, was The Washington Post within a sound ethical framework when it published the woman’s name using its large platform? In other words, is it right or wrong to publish the names of private citizens running influential social media accounts?

Those who think The Washington Post was wrong to publish the creator’s name argue that it indeed constitutes “doxxing”. They see The Washington Post’s move as largely political, and argue that making her name public was meant to intimidate the woman for having dissenting views and for being successful at bringing her views to others’ attention. The ultimate goal, they argue, is to punish her and scare her into silencing herself.

Others have made the argument that it’s wrong for a major media outlet to expose a private citizen, and that the power and reach of major newspapers should be reserved for exposing wrongdoing among major government institutions, organizations, oligarchs, and politicians only.

DNC Regime Narrative Enforcer warns that dissidents who dare to repost videos of liberal degeneracy will suffer consequences to their social credit scores, or "a social cost." https://t.co/3eQ3eemnT9

Some accused Lorenz of hypocrisy because she previously spoke out about online harassment in a tearful appearance on MSNBC. Journalist Glenn Greenwald (Center) published a long thread on the issue, arguing that “the framework corporate journalists are trying to construct and force you to accept” is one in which journalists “can criticize, expose, bully, and destroy anyone they want: no limits” but “you can't criticize how they use their power. That's ‘harassment.’” He argued that journalism is meant for exposing powerful institutions rather than private citizens.

Journalism isn't about just exposing things for the sake of it.

It's about exposing matters in the public interest about *powerful institutions*: CIA/NSA, Wall St, oligarchs, politicians.

Babylon Bee (Lean Right bias) CEO Seth Dillon called the Washington Post article “pure intimidation” and said he had “worked out a deal” with the creator “that will turn her heroic, high-risk work into a career.”

1/ The exposure of @libsoftiktok isn't journalism; it's pure intimidation. They're threatened by her effectiveness, so they hope to silence her by making her too afraid to continue. They want to raise the cost of doing her work so high that she has no choice but to quit.

Arguments on the Left: This Influential Actor Should Be Exposed

Those who think The Washington Post was justified see publishing the creator’s name as an acceptable response to an account that spurred harassment against vulnerable people who had done no wrong. They argue that what conservatives claim is “harassment” is simply acceptable reporting, and the same standard would not be held to coverage of anonymous influencers in campaign finance or other fields. To those who agree with this position, Lorenz’s article doesn’t amount to doxxing because the creator’s name and address were already publicly available.

NBC News (Lean Left bias) reporter Ben Collins argued that Libs of Tik Tok was “driving harassment” toward LGBTQ public teachers and argues Lorenz was within a reasonable standard of behavior to go to the woman’s house to confirm her identity and ensure that other people by the same name were not falsely accused of having run the “anti-LGBT hate account.” Political reporter Nathan McDermott agreed that knocking on doors is “good journalism” and a “fairly innocuous way to communicate with people.”

if the libs of tiktok lady didn't want harassment campaigns and didn't want calls made to schools, she would demonstrate any awareness of and dislike for the fact that this is what happens every time she makes a post.

Lorenz herself says the “doxxing” question distracts from @LibsofTikTok’s prominent place in a rising trend of homophobia. Responding to criticism that her article relied too heavily on the assertion that the @LibsofTikTok account is “bad,” Lorenz agreed that “an account whose goal is driving LGBTQ ppl out of public life is bad” and stated that “the *point* of the story is actually a nuanced look at radicalization & how the right wing outrage cycle functions. That’s worth covering.”

Yes, an acct whose goal is driving LGBTQ ppl out of public life is bad. Gay/trans ppl targeted by the acct have had their lives destroyed, but the *point* of the story is actually a nuanced look at radicalization & how the right wing outrage cycle functions. That’s worth covering https://t.co/VP6gpqowE8

Rather than debate “doxxing” I hope people can read this story and see the striking escalation of attacks against gay and trans people, and the crucial role this account has played in the right wing media ecosystem https://t.co/p5dNT7Li1B

To one side of this issue, Taylor Lorenz and The Washington Post unfairly harmed an innocent or undeserving Twitter poster. Essentially, they were the abuser, and @LibsofTikTok was a victim engaged in fair conflict with LGBTQ education in schools.

To the other side, Lorenz engaged in fair conflict to defend victims from abuse caused by the @LibsofTikTok account.

The true key to this debate is neither Lorenz nor a conservative Twitter poster, but the subjects of @LibsofTikTok’s posts, and the underlying debate about sexual education in schools. Do teachers deserve to be labeled “groomers” for teaching kids about gender theory and sexual orientation? Are children being exposed to sexual topics at too young an age? Is sex education “sexual”? Is gender theory a necessary component to helping LGBTQ kids feel accepted, or is it harmful indoctrination that only confuses them?

Your opinion on those issues, and the impact of @LibsofTikTok on those people, will inform your opinion on almost everything else here. You can read all sides of the LGBTQ topics in schools debate by visiting our AllStances™ and deciding for yourself.