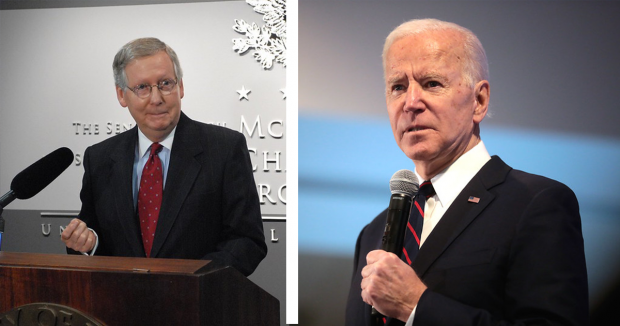 The Supreme Court vacancy left after Ruth Bader Ginsburg’s passing last Friday is up for grabs, and the media is all over it.

Politicians and lawmakers from both parties are taking sides on whether to fill Ginsburg’s open seat before or after the 2020 presidential election. News reports are focused on this rhetoric, while also zooming in on how the same leaders felt about filling a similar Supreme Court vacancy in the midst of the 2016 presidential election.

In March 2016, outgoing President Barack Obama nominated Merrick Garland to replace the recently deceased Justice Antonin Scalia. The Republican-controlled Senate chose to wait until after the 2016 election, which Trump won, to then vote and confirm Trump’s selection of Neil Gorsuch. The move created a 5-4 conservative majority on the nation’s highest court. At the time, many Democrats had implored the Senate to vote on Obama’s nomination before the November election instead of waiting until after.

Leaders on both sides are taking much different stances on filling the vacancy now than they did in 2016. To the surprise of few, different sides of the media framed members of each party as hypocritical based on these changes.

Some reports from right-rated media are concentrating on former Vice President Joe Biden’s 2016 push to fill the vacancy before the election, and how that differs from his calls this week to wait until after the election to nominate Ginsburg’s replacement.

Some right-rated outlets are running videos of Biden in 2016 stating a vacancy ought to be filled by the sitting president:

The National Pulse (rated as Right by AllSides): WATCH: Biden Demanded Supreme Court Vacancy Is Filled ‘Even A Few Months Before A Presidential Election’

Other coverage is focused on Ginsburg’s own statements from 2016, in which she called on the Senate to vote on Obama’s selection:

Some right-rated outlets are focusing coverage on how prominent Democrat lawmakers, such as Sens. Amy Klobuchar (MN) and Dianne Feinstein (CA), have changed stances on the matter since 2016:

It’s true that many Democrats have vastly different opinions now than they did in 2016 when it comes to filling Supreme Court vacancies. But that’s only one side of the story.

Senate Majority Leader Mitch McConnell (R-Ky.) was instrumental in the Senate’s reluctance to vote on Garland in 2016. Now in 2020, McConnell supports voting to confirm a new justice before the November election. This change has drawn several reports from left-rated media that frame McConnell as a hypocrite:

CBS News (Lean Left): Here's what Mitch McConnell said about not filing a Supreme Court vacancy in an election year

Like right-rated media concentrated on Democrats, some left-rated sources are focused specifically on Republican senators who have apparently reversed their 2016 stance on the matter:

Mother Jones (rated as Left): A Long List of GOP Senators Who Promised Not to Confirm a Supreme Court Nominee During an Election Year

One fact check article concentrated on Sen. Lindsey Graham (SC), whose comments this week were different from ones he made in 2018 about filling vacant Supreme Court seats:

All in all, many politicians in either party think differently about Supreme Court vacancies now than they did in 2016. That’s part of how modern American politics works: shifting stances — sometimes with apparent disregard for history — in order to support what is politically beneficial to their own party. Politicians are biased by the nature of the job. But biased media robs readers of the full context and leaves them with an incomplete understanding of the news at hand.

Content that confirms your existing beliefs can make for easy and comfortable reading, but it clouds your view and prevents you from getting the whole truth. Always seek out diverse viewpoints (with tools like our balanced search and balanced newsfeed) to make sure you’re getting the full picture.

"Joe Biden" by Gage Skidmore is licensed under CC BY-SA 2.0

"Mitch McConnell" by McConnell Center is licensed under CC BY-NC-ND 2.0