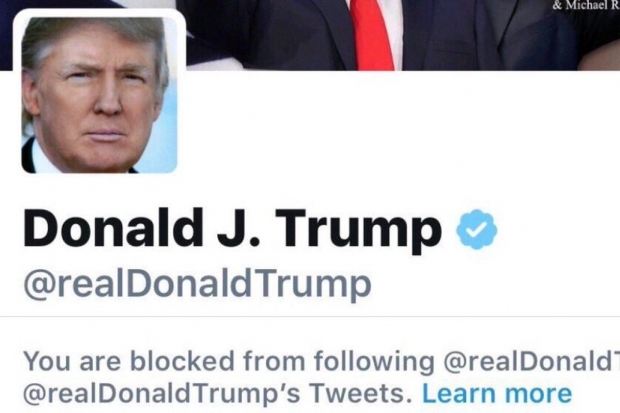 Last month, we wrote about Twitter's new tools that help users censor their feeds, thus cementing partisan filter bubbles. This month, a lawsuit against President Trump takes that debate to the next level.

The Knight First Amendment Institute, a free speech advocacy organization, is filing a lawsuit representing seven Twitter users who have been blocked by the president’s @realDonaldTrump account.

The suit claims that the president blocking these Twitter users violates their First Amendment rights. According to the Knight Institute, the US president should have a particular responsibility to maintain an open platform on social media accounts, especially when the White House Press Secretary has declared social media updates, in particular the president’s tweets, the equivalent of press releases.

News outlets from across the political spectrum are buzzing about the suit:

) published an op-ed by one of the plaintiffs, Rebecca Buckwalter-Poza, in which she outlines the ways her career is personally affected by @realDonalTrump’s block on her account.

) offers a counter perspective, casting speculation on the Knight Institute’s claims that President Trump’s Twitter blocks constitute a free speech infringement. The piece, written by Jim Treacher, notes that one member of the suit, Holly O’Reilly, is an inveterate Twitter account blocker. “She doesn’t have to listen to me. He doesn’t have to listen to her. The First Amendment has nothing to do with any of it,” Treacher says.

) op-ed, she asserts that this type of comparison is a false equivalency. “When Trump blocks people for disagreeing with him, he isn’t just deciding not to hear our voices; he’s cutting us off from receiving these official statements. He has closed the door of the virtual town hall meeting to everyone except people who agree with or say nice things about him.”

What do you think? Is it Trump’s right to block Twitter users, or, as the president, does he have a responsibility to engage with everyone?