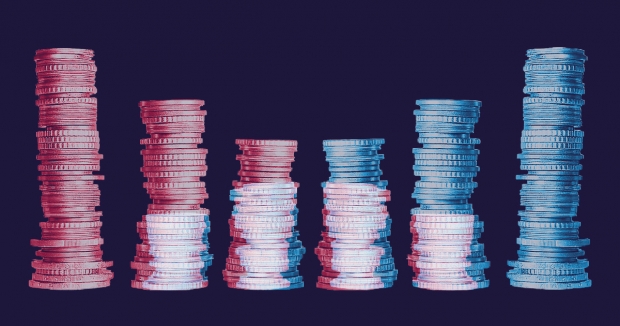 On the surface, the media bias displayed by Huffington Post (Left bias) and the Daily Wire (Right bias) couldn’t be more different. But a closer look reveals how corporate interests drive both media outlets toward bias and sensationalism, even as they appeal to different ends of the political spectrum.

How Corporatization Fuels Media Bias and Drowns Out Good Journalism

Though their news biases are very different, HuffPost (formerly Huffington Post) and The Daily Wire are similar in how business incentives push them toward highly biased and partisan content.

HuffPost is owned by a publicly-traded company with shareholders to please. Similarly, The Daily Wire is a media venture that generates a lot of revenue, and is clearly looking to make more. Each has a clear business incentive to create online content that fires up their base, gets clicks and goes viral.

For both the Daily Wire and HuffPost, that means leaning into partisan content.

With recent headlines like "WHAT’S A WOMAN? GOP STUMBLES, GRUMBLES OVER THEIR OWN QUESTION!" and "Rep. Marjorie Taylor Greene Condemned For One Of Her Vilest Tweets Yet," HuffPost’s prioritization of clicks over quality news content is clear. These headlines seek to evoke emotional reactions rather than convey information with balance.

At The Daily Wire, sensational headlines like "Biden Mocked Over Video Of White House Event: ‘Literally No One Wants To Talk To Joe Biden’" and "‘This Is Child Abuse’: Critics Blast Biden’s Endorsement Of ‘Gender-Affirming Surgeries’ For Transgender Children" make similar attempts to drive clicks by playing into political polarization.

Meanwhile, the Daily Wire is placing a new focus on partisan entertainment content. In an interview with Axios (Center bias) in January, co-founder Jeremy Boreing said the Wire was moving to create films and TV series "with a conservative view so that we can compete with Hollywood for entertainment dollars."

Bias can help drive business, but it's not a silver bullet: even businesses that lean heavily into one side can experience hardship. For BuzzFeed and HuffPost, that connection was seen in the sudden firing of 47 employees when the company stopped publishing HuffPost Canada in March 2021. The same day, BuzzFeed CEO Jonah Peretti lamented how the company lost "around $20 million" in the previous year.

The more people read and view ads, the more money content publishers make. With an undeniable connection between readership and revenue, HuffPost, Daily Wire and many other news sources across the spectrum can lean into partisanship, clickbait and/or sensationalism. In the process, they lose sight of traditional ethics.

No matter what the bias of a news source is, its business structure can likely shine a light on why its content might seem sensational, unbalanced or misleading. Business goals create strong incentives to prioritize partisan sensationalism over nuanced journalism. For HuffPost, Daily Wire and many others, appealing to a partisan base can help them to target their audience, keep them coming back for more, and drum up more ad revenue. The balance and nuance we’d expect from quality journalism can become less of a priority.

HuffPost was previously owned by Verizon before BuzzFeed Inc. bought it in 2020. AllSides also rates BuzzFeed News’ bias as Left.

BuzzFeed is a publicly-traded company, of which HuffPost is a subsidiary. BuzzFeed co-founder and CEO Jonah Peretti also co-founded HuffPost along with Kenneth Lerer, Andrew Breitbart (founder of Breitbart) and Arianna Huffington in 2005, before leaving in 2013 upon the news site’s sale to AOL.

HuffPost’s About page describes how it is "owned by digital content company BuzzFeed, Inc." On BuzzFeed Inc.’s About page, it describes its commitment to "providing trusted, quality, brand-safe news and entertainment to hundreds of millions of people; making content on the Internet more inclusive, empathetic, and creative; and inspiring our audience to live better lives."

BuzzFeed’s ownership of HuffPost doesn’t affect either source’s rating. In fact, ownership and financial ties don’t affect any of our AllSides Media Bias Ratings™ — we rate the bias of content only. We provide financial and ownership information as an FYI to our readers, and you’re always welcome to draw your own conclusions about corporate interests.

Daily Wire, LLC is owned by Bentkey Ventures, LLC, which was founded and is managed by fracking billionaire Farris Wilks. It was founded in 2015 by conservative pundits Ben Shapiro and Jeremy Boreing, with help from an investment by Wilks.

The outlet describes this partnership on its About page:

"In partnership with Caleb Robinson, with whom Boreing had been trying to gin up a movie company — Boreing is always trying to gin up a movie company — the team launched The Daily Wire in 2015 with an initial investment by Farris Wilks. As of July 2020, neither Shapiro nor Boreing have ever met Dan Wilks or received any money from Wilks Brothers, LLC, which doesn’t stop the site’s detractors from braying about how the company is ‘bought and paid for by the evil fracking Wilks Brothers!’ — ‘Wilks Brothers’ sounding, we guess, like Koch Brothers and thus more nefarious to leftist media outlets. Or something."

While their business incentives are similar, there is a vast ideological divide between the content from Huffington Post and Daily Wire. For evidence, look no further than their recent coverage of transgender NCAA swimmer Lia Thomas.

Daily Wire headline: ‘I Left There With No Trophy’: NCAA Female Swimmer Who Tied For Fifth With Trans Athlete Says Officials Put Lia Thomas Ahead Of Her

The article from HuffPost frames Thomas positively, describing her as a "strong contender" who is "smashing" records while mounting a historic NCAA women’s swim season. The outlet paints her participation in women’s sports and success as an objectively good thing, and only quotes Thomas, who says, "Being trans has not affected my ability to do this sport and being able to continue is very rewarding." It doesn’t highlight any criticism or questioning of Thomas competing in women’s sports.

The Daily Wire article, meanwhile, is much longer and frames Thomas’ participation negatively, highlighting the voices of female swimmers who are critical of NCAA rules that allow Thomas to compete against them and change with them in the women’s locker room, and suggests that Thomas’  biology creates an unfair advantage. The outlet points out that Thomas "stands at 6 feet 1 inch, towering over Gaines’ 5’5” frame" and says Thomas drew "nationwide backlash for swimming and competing on a women’s team after racing with men for three years."

So when looking at the bias of their content, the two media outlets couldn’t seem further apart. But similarities begin to surface when comparing their business structures and financial motivations, and the connection between corporatization and media bias becomes evident.

See news from HuffPost, Daily Wire and hundreds of other media outlets in between with our balanced news feed.

Henry A. Brechter is AllSides’s Managing Editor. He has a Center bias.