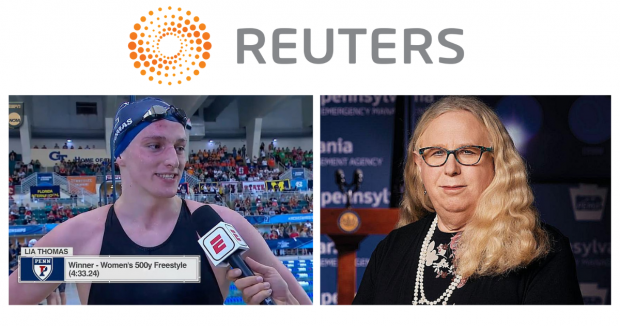 Reuters Fact Check bias is rated Center by AllSides, but as we have often explained, Center outlets aren’t necessarily free of bias.

“Social media users are claiming that transgender women are dominating women-only competitions, highlighting swimmer Lia Thomas and Assistant Health Secretary Rachel Levine as examples,” Reuters writes. To illustrate this, Reuters points to one person’s Facebook post, which begins, “Look I’m in no way transphobic, if people want to identify as a different gender, then that’s their business… But when it comes to gender divided competitions… I am absolutely against former men, competing in the women’s field, just as I would be against former women competing in men’s, for which they may have a biological ‘upper hand’.”

Reuters ultimately concludes that the post is “missing context,” arguing that because "Lia Thomas won a single category at the NCAA swimming competition and Rachel Levine was one of USA Today’s eleven Women of the Year," it is not true that "transgender women are dominating women-only competitions."

Reuters seems to take issue with the insinuation made by the social media post that trans women are "dominating" women’s spaces. But there's an issue with trying to fact-check this position. Whether or not trans women are "dominating" women's spaces is a perspective that sits in the realm of subjective opinion, and therefore it can’t be easily “fact checked.”

Reuters even admits that it is fact checking an opinion, writing: “The post is mostly the user’s own opinion and is therefore beyond the scope of this article, but the claims do not include context about both women." Reuters should have labeled this content as “opinion” or “analysis” rather than “fact check."

To “dominate” means "to exert a supreme, guiding influence on or over" or "to enjoy a commanding, controlling position in." Reuters thinks there aren’t sufficient instances of trans women getting to the top of women’s categories to say they are “dominating.” Others would argue there are — or that things are trending in that direction.

How many trans women have to be at the top of how many categories before someone would be comfortable saying they are dominating? This is largely subjective. Reuters clearly thinks it requires more than two instances, and felt it necessary to specify that Levine and Thomas have moved to the top of two categories. Meanwhile, other people would be comfortable saying trans women are dominating, because Thomas beat all biological women in the NCAA competition and Levine beat out other biological women in the Women of the Year competition; they speculate about the beginning of a trend.

Those who support the Reuters position would likely argue that two examples of transgender athletes succeeding in competition against biological women is not sufficient evidence of domination. Yet those who agree with the Facebook post might argue that due to the relatively small number of transgender women competing for high-profile sports events and leadership positions, any instances of trans women succeeding in these spaces are notable, and evidence of a biological advantage for trans women over biological women, which could lead to total domination.

Reuters has attempted to fact check a claim that is largely subjective in nature before. In January, the outlet wrote about whether or not “mass formation psychosis” was a fair way to describe the U.S. attitude toward COVID-19 response and vaccines.

Even fact checkers can display bias, and it can be tricky to spot. Use the AllSides Fact Check Bias Chart™ and read fact checks across the spectrum to learn how to spot bias and think for yourself.