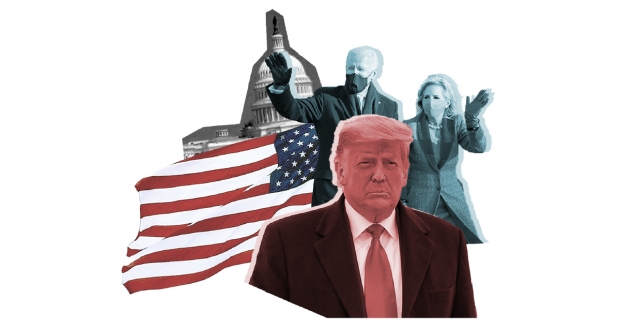 The claim that the 2020 presidential election was stolen from Donald Trump has underscored most political discourse in the U.S. for over a year. There is no evidence that voter fraud led to Trump’s defeat. But some on the right and elsewhere hold a broader definition of “stolen” in this case.

Let’s break down the media coverage and dominant opinions around the claim, and highlight the main facts, myths and disagreements.

The 2020 presidential election was stolen from Donald Trump due to one or more factors: Democrat-orchestrated voter fraud; mainstream media bias; and “deep-state” efforts to hurt public opinion of him.

What Some Political Insiders Have Said

The situation needs a bit of nonpartisan political context.

Both parties often use fear-mongering. In order to enrage and engage your base, it can be quite effective to claim that the other side is cheating or manipulating elections. One side hypes concerns of voter suppression, the other side hypes concerns of voter fraud. Yes, some of the motivation here comes from a passion to maintain a healthy democracy, but it’s mainly about each side trying to get advantage over the other side. Some say that neither side has sufficient evidence to make a case for major changes.

Spreading the idea that the ultimate victor is somehow illegitimate is not new.  This makes it harder for the victor to succeed in their agenda, or at least makes the voters on the losing side feel better. Democrats worked to frame the victories of George W Bush in 2000 and of Donald Trump in 2016 as illegitimate. In that light and even without clear evidence, some see Trump’s efforts to frame his loss as the result of voter fraud as fair game after the left’s efforts to delegitimize his 2016 victory and handcuff his presidency for years with unfounded, politically-motivated charges of Russian collusion and impeachment hearings. Still, many others see Trump’s efforts as a dangerous disgrace to the democratic process.

What the Left Has Said

The left, as well as some on the right and elsewhere throughout the political spectrum, maintain that claims of a stolen election are baseless, and frequently state that “there is no evidence of widespread voter fraud.”

They mainly focus their dismissal on Trump and his claims, which they cite as having a clear lack of evidence. They argue that those claims encouraged the deadly riot at the U.S. Capitol on January 6.

Many on the left also suggest that the lack of evidence of widespread voter fraud in the 2020 Presidential election also means that concerns about election integrity are overhyped or unfounded, and therefore steps and proposals to increase ballot security, such as changes to Georgia election laws in 2021 or returning ballot protections to pre-2020 levels, are examples of partisan voter suppression efforts.

One article from Time Magazine (Lean Left) in February 2021 described how powerful people conspired “to influence perceptions, change rules and laws, steer media coverage and control the flow of information” in an effort to ensure the 2020 election “would be free and fair, credible and uncorrupted.” Time described the group as crossing “ideological lines,” including “left-wing activists” as well as “nonpartisan and conservative actors.” Many on the left celebrated this coordinated effort and felt they were protecting the integrity of our election system.

What the Right Has Said

Some on the right considered this well coordinated, national program to be part of the left’s efforts to “steal the election”.

Most of the leaders of the Republican Party agree that Biden won the election, and supported certifying the election results. Many of those same people also voiced and continue to voice concern about late changes to election rules and the purportedly unfair, undemocratic control of the information flow in the U.S., especially from the mainstream left media and technology companies.

Others on the right go one step further, claiming that widespread voter fraud, enabled and carried out by Democrats, led to Trump’s defeat. Trump is one of this claim’s main proponents.

For some, saying the election was “stolen” refers purely to alleged widespread election fraud. For others, it refers to a broader set of problems and doesn't necessarily include widespread voter fraud.

On the voter fraud argument, the right is particularly concerned with mail-in ballots. While many (including some on the right) see mail-in voting as a win for people who lack access to in-person ballot boxes, many others on the right argue that it weakens the integrity of our elections. They point out that over 80% of Americans support voter ID, and they note that many 2020 election rule changes, including expansion of mail-in balloting, reduced voter ID and other election regulations.

With mail-in ballots, the right points out that Democrats engage in extensive ballot harvesting. Republicans are concerned that during ballot harvesting and other election tactics, Democrats can pressure, manipulate, bribe (with alcohol or otherwise) or otherwise inappropriately influence voters, or even fill out their ballots, without being caught. At a minimum, the right argues that Democrats change the laws to their own advantage, and then accuses them of hypocrisy if they complain when Republicans use those same laws to their benefit.

Watching election results change from Republican victories on election night to Democratic victories in the following days led some to believe that Democrats waited until late in the night to see Trump’s leads before manifesting mail-in ballots, doing a "ballot dump" in the dead of night, and giving their candidate a lead. There are clear examples of this happening in overseas elections, but recent cases of proven election fraud in the U.S. tend to result from other kinds of illegal behavior.

Many regular voters on the right acknowledge that there hasn’t been clear evidence of decisive fraud in the 2020 election. They also argue that voter fraud is very hard to prove, and many aren’t convinced it didn't happen in 2020 despite the lack of evidence. Some right-rated outlets, such as The Epoch Times (Lean Right), continue to devote significant coverage to voter fraud claims from the 2020 election and elsewhere. However, one of the major concerns about fraud and voting irregularity is that safeguards around elections were dropped prior to the election to the point where undetectable election fraud could become much more rampant.

Another common claim, also posited by Trump but more widely across the spectrum, is that an overload of biased media helped lead to his downfall. Some might hold the position that mainstream news outlets directly conspired to coordinate negative coverage of Trump in a way that would skew public opinion of him ahead of the election. Many others would argue that groupthink and intolerance for outside views among journalists created a mainstream bias against Trump, whether it was coordinated or not.

Some on the right see the FBI’s recent arrest of a man who provided information for the Steele dossier — a trove of since-discredited materials on Trump’s alleged collusion with Russia — as more confirmation that biased, anti-Trump news sources recklessly contributed to painting a negative public picture of Trump that was based, at least partially, on false or questionable information.

Some might argue that the COVID-19 pandemic was exaggerated by public health authorities, Democrats and anti-Trump journalists — either intentionally or coincidentally — in a way that hurt his public image with voters.

Some would argue that anti-Trump influencers and corporations unfairly propagated cancel culture to help Biden win. They might argue that Trump was made into such a taboo subject that showing any signs of support for him could lead to a person being fired from their job, publicly shamed, harassed or targeted by violence.

Some left- and center-rated outlets, as well as social media companies, censored or moved to debunk stories from the New York Post (Lean Right bias) in late 2020 that focused on a laptop belonging to Joe Biden’s son Hunter, which some say contains evidence of potential corruption involving the current president. Though there hasn’t been clear evidence that Biden and his son engaged in corrupt acts, some media outlets, such as the New York Times (Lean Left bias), have since retracted reports that described the Post’s coverage as “unsubstantiated.”

For many on the right, a combination of some or all of these points is enough to convince them that the election was manipulated in Biden’s favor. And that is what many of them mean when they say “the election was stolen”.

Is it True or False?

As of this writing, Joe Biden is the President of the United States.

There are no outstanding legal efforts that could lead to the 2020 presidential election results being overturned. Outlets across the spectrum have acknowledged how dozens of lawsuits filed to overturn Biden’s victory have failed due to a lack of evidence.

No one has revealed or uncovered evidence that Biden was elected president due to voter fraud. There are criminal convictions proving that some fraud occurred in the 2020 presidential election and other recent elections, but not nearly enough to have decided the winner. A Republican-funded audit of the close election results in Arizona concluded by finding that Biden won by several more thousand votes than initially thought.

Many of the biggest U.S. news outlets showed consistent signs of anti-Trump and anti-conservative bias throughout his presidency and leading up to the 2020 election.

If “stolen election” refers only to voter fraud, there is clearly no evidence to support the claim.

If “stolen election” also adds a variety of other factors that are hard to measure or verify including extreme negative media bias, censorship by social media, cancel culture, coordinated efforts to destroy the Trump presidency among powerful members of the public and more, the claim shifts from a fact-based claim to a subjective judgement or stance against what they see as an uneven playing field.

Did we miss something in this breakdown? Email us and let us know.