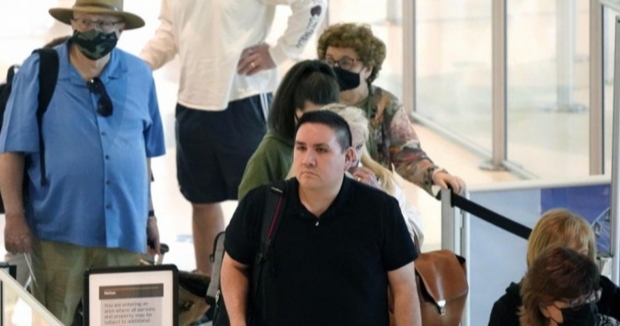 A federal judge overturned the federal mask mandate for airplanes and public transportation this week, and the Biden administration is seeking an appeal.

A U.S. district judge in Florida ruled that the CDC exceeded its legal authority and failed to justify its decision to lengthen the mandate to May 3. White House Press Secretary Jen Psaki said the ruling was "obviously a disappointing decision." The CDC's most recent extension was the fifth extension since the rule was initially announced.

All 50 states have ended statewide mask mandates, but Philadelphia and other cities are starting to reinstate them amid a spike in COVID-19 cases. Despite a remark from President Joe Biden this week that whether people mask up on public transportation is "up to them," the Justice Department announced Wednesday that it would seek to overturn the judge's ruling and restore the mandate.

Left-rated outlets often highlight the potential public health risks of lifting the mandate, and frame the judge's credentials and decision as questionable. Some right-rated news sources cite low COVID-19 case numbers while framing the judge's ruling positively. Recent opinions from mainstream media sources on mask mandates follow typical left-right divides on COVID-19: some on the left want mandates to remain in place, and many others across the spectrum are indifferent or supportive of mandates ending. Many opinions from the left, as well as some on the right, questioned the judge's legal arguments in deciding the case.

Meanwhile in the Russia-Ukraine conflict, fighting in the Donbas begins as the U.S. considers more military aid for Ukraine. Follow along with our daily updates on the conflict, and read more balanced coverage from this week:

"If an appeals court or even the Supreme Court upholds Mizelle’s ruling, it would create a precedent arguing against such a sweeping use of federal power in response to declared public health emergencies. US cases of COVID-19 are down dramatically since hitting an all-time high in January as the more infectious but less deadly Omicron variant of the virus spread. Most US cities have eliminated indoor mask mandates for businesses and public buildings."

"If politicians acknowledged the judicial branch's authority to interpret and apply statutes only when they liked the result, it would be fatal to the rule of law."

"The administration argued that masks qualified as "sanitation" under the law, but Mizelle disagreed, opting for a much narrower definition of the term that would exclude measures like face coverings. Legal experts say her interpretation missed the mark."

"The most likely reading of her opinion, in other words, is that she simply disagreed with the Biden administration’s masking policy, and concocted a justification for striking it down. That approach should trouble anyone who cares about democracy, regardless of what they think about mandatory masking on airplanes."

"The poll by The Associated Press-NORC Center for Public Affairs Research finds that despite opposition to that requirement that included verbal abuse and physical violence against flight attendants, 56% of Americans favor requiring people on planes, trains and public transportation to wear masks, compared with 24% opposed and 20% who say they’re neither in favor nor opposed."

"Several airlines — including the four largest in the U.S. — Uber, Lyft and Amtrak dropped their masking requirements following the Transportation Security Administration's announcement that it will no longer enforce a mandate. Other transit services did not take immediate steps and say they're awaiting further guidance from the government."