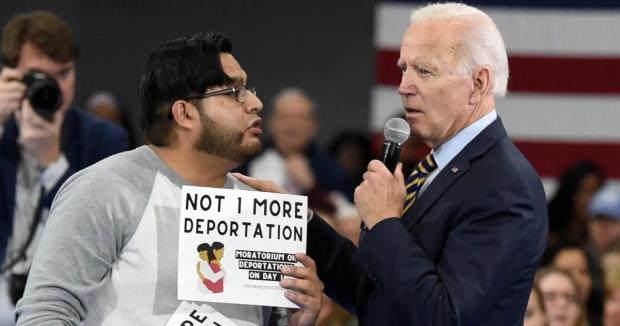 The war in Ukraine is getting bloodier. Inflation is continuing to soar. The last thing Joe Biden needs right now is another crisis.

But it looks like that is exactly what he’s getting.

Just as his administration is preparing to loosen immigration restrictions next month, U.S. border authorities announced that they had arrested more than 210,000 migrants at the Mexico border in March. That is a 24 percent increase from March of 2021 and the highest monthly total in more than twenty years. Not only are Republicans moving aggressively to hold Biden’s feet to the fire on the issue, but many of his fellow Democrats who are preparing to face voters this fall are leveling their own criticisms toward a president of their own party.

Biden inherited an immigration infrastructure that had been gutted over the previous four years. He promised comprehensive reform on his first day in office, stopped construction on a border wall, and quickly reversed several Trump-era restrictions. But he maintained other changes that his predecessor had instituted, including the utilization of a 1944 public health law called Title 42 which allowed the U.S. government to expel more than 1.7 million migrants who had hoped to apply for asylum as a way of protecting against the threat of the coronavirus.

Now, Biden administration health officials have indicated that these restrictions can be lifted, potentially creating an immense increase in the number of immigrants attempting to cross the border. The result could be a replay of the chaos that the administration faced early in Biden’s term, when overwhelmed border staff struggled to remain control over huge numbers of migrants attracted by what they hoped would be more welcoming policy changes under the new president. The prospect of those types of scenes, which will quickly become fodder for Republican campaign officials, have created a situation where Biden is being fired upon from unlikely sources.

No fewer than five Democratic Senators up for re-election this year have raised doubts about the plan to repeal Title 42, including Catherine Cortez Masto of Nevada, the first Latina to ever serve in the U.S. Senate. The critics represent border states like Arizona and Northern locales like New Hampshire. The group is comprised of both progressives and centrists. The one thing they all have in common is vulnerable paths to re-election, along with an awareness that Biden’s public approval ratings on immigration policy are scraping bottom.

These endangered incumbents were joined by an even more improbable voice over the weekend, when Senator Chris Coons of Biden’s home state of Delaware spoke out against the policy change too. Coons is the president’s closest friend in the Senate, and might have ended up as Secretary of State if Biden hadn’t needed him on Capitol Hill so badly, so he was exceedingly polite in expressing his concern. (“My hope is that will be reconsidered appropriately” was all Coons said.) But even well-mannered opposition is still opposition, and Coons’ statement almost certainly reflects broader concerns among congressional Democrats.

But Biden’s party is deeply divided over this issue. Progressives and centrists have been fighting fiercely over the best path forward for over a year now, and the disagreement has gridlocked Biden’s agenda from the beginning. At the same time that party centrists are pulling away from Biden on Title 42, progressives are warning him that an already dispirited Democratic base would be enraged if Trump’s policy is not reversed as planned.

Meanwhile, Republicans smell blood. Texas governor Greg Abbott was forced to back down from his plan to require additional inspections of trucks crossing the border when it threatened to shut down his state’s agricultural sector. But he has sent busloads of migrants to Washington, DC and is one of many GOP leaders now seeking to tie Biden’s immigration policy to the increase in fentanyl coming across the border. Expect to hear about this link almost non-stop until November.

A united Republican Party chllenging divided Democrats on one of Biden’s weakest issues is not a recipe for midterm success. Six months is a long time in politics, but Biden will need to find a way to reverse the current trend quickly for his party to avoid being swallowed whole by the immigration debate this November.