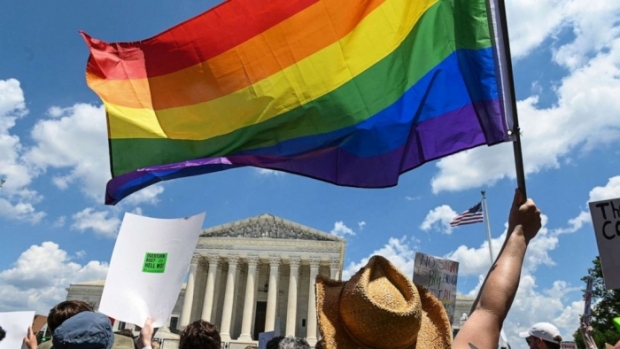 At a signing ceremony on the White House lawn, Biden sad the law focuses on "a simple proposition: Who do you love? And will you be loyal with that person you love? It’s not more complicated than that."

Democrats pushed to pass the bill after Supreme Court Justice Clarence Thomas wrote earlier this year that the court should "reconsider" all prior inferred rights, including its rulings recognizing same-sex and interracial marriages.

A bipartisan group of senators introduced the legislation last month, and the Senate then passed it in a 61-36 vote with support from 12 Republicans, some of whom successfully pushed to add an amendment stating that nonprofit religious organizations "shall not be required to provide services" to a marriage they oppose.

A September 2022 Grinnell College survey said that 74% of people in the U.S. said same-sex marriage should be a guaranteed right. In addition to protecting same-sex marriages under federal law, the act also repeals the 1996 Defense of Marriage Act, which recognized marriage as "only a legal union between one man and one woman as husband and wife."

The push to pass the legislation was a top story over the past month across the spectrum, but the signing itself was much more of a focus for left- and center-rated sources. Right-rated outlets that covered the signing often highlighted how Biden invited drag queens to attend.

What the Respect for Marriage Act does and doesn't do

"What RFMA does do is require the federal government and all states to recognize same-sex and interracial marriages if they were legally performed in the past or are performed in the future in places where they are still legal, including other states."

Gee, thanks for this tiny step to protect my same-sex marriage

"Look, as an institutionalist who recognizes the power of incrementalism in the slow but steady march to equality, I’m used to seeing the forest for the trees. In that regard, the legislation’s repeal of the remaining section of the 1996 Defense of Marriage Act — which defined marriage as one man, one woman — is an advancement. But the more I focus on the trees that make up this act, the more my joy diminishes."

"The Respect for Marriage Act redefines marriage for purposes of federal law as between two persons and grants federal protections to same-sex and interracial marriages. It was amended over the past two weeks to include federal protections for religious beliefs and freedoms. Those protections ensure that churches and faiths can maintain their own doctrines and definitions of marriage and won’t be forced to perform or host same-sex marriages."

"With the support of 12 Republicans in the U.S. Senate,  39 Republicans in the U.S. House of Representatives and all Democrats in both chambers of Congress, this legislation ultimately reflects the will and the beliefs of the majority of the American people. Most Americans know and love family members and friends who are members of the LGBTQ+ community and want them to be able to enjoy the dignity and protection afforded by marriage."

"The White House invited Marti Gould Cummings, a nonbinary drag queen who has repeatedly attacked police online, to attend the Respect for Marriage Act signing ceremony Tuesday. Cummings thanked President Biden and first lady Jill Biden and shared an image of the digital invitation in a social media post Monday. Last week, the House passed the legislation, which mandates the federal government recognizes same-sex marriages instates where they are legal."

The US cares about religious freedom abroad, but at home? Not so much

"Ostensibly about codifying the Supreme Court’s Obergefell v. Hodges decision on same-sex marriage, this legislation sets the stage for dissenting religious organizations and nonprofit organizations to lose their tax-exempt status and licenses to operate. The act provides no new benefit for civilly married same-sex couples. It does, however, give activists and bureaucrats new tools to harass people and institutions that profess traditional beliefs about marriage."