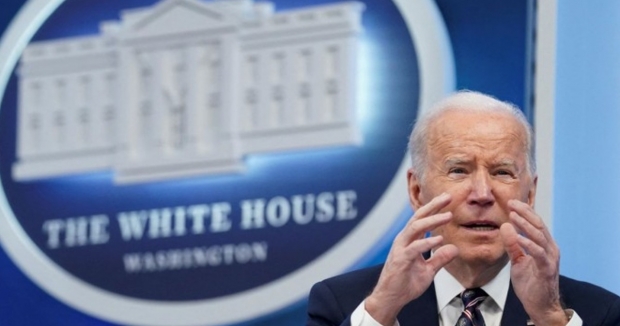 President Joe Biden used the beginning of his first State of the Union address to voice support for Ukraine as Russia invades the country.

Russia is reportedly bombing civilian areas and trying to overtake major Ukrainian cities, but is being met with significant resistance and heavy sanctions. In his speech, Biden accused Russian President Vladimir Putin of an "unprovoked, premediated attack" and said that "When the history of this era is written, Putin’s war on Ukraine will have left Russia weaker and the rest of the world stronger." He announced that the U.S. would close its airspace to all aircraft from Russia, building on previous economic sanctions, while also reiterating that U.S. troops would not engage in the conflict.

Many sources across the spectrum highlighted how Biden's support for Ukraine during the speech inspired a show of bipartisan unity among lawmakers in attendance. Some coverage from left-rated outlets said Biden's speech wasn't critical enough of certain Republicans for their role in the Jan. 6 Capitol riot or their purported support of Putin. Some on the right argued that Biden wasn't emphatic enough about condemning Putin or confronting domestic issues, and criticized moments when Biden misspoke or floated a misleading claim.

Biden to America: ‘We’re going to be OK’

"Biden has long put at the center of his presidency the need to showcase to the world the powerful symbol of an America willing to forcefully follow its ideals. But rarely has his argument been so critically tested on such a massive stage. At times on Tuesday, the president seemed to be trying to will the public to believe that the campaign he was waging would work."


Is Biden the comeback kid?

"[Biden] missed an important opportunity. Putin's war of aggression isn't just happening "over there," but here in America, too. Putin's oppression and disdain for democracy is winning the hearts and minds of too many American voters, stoked by a former president, members of a political party and right-wing media machine that has defended Russia"

"The ovation joined by both parties marked a return to tradition for Washington. Two years ago, House Speaker Nancy Pelosi was so disgusted with then-President Donald Trump's claims to be protecting healthcare insurance in his speech that she ripped her copy into pieces behind his back."

"Some of his statements didn’t square with the facts. Biden said the planned release of 60 million barrels of global oil reserves, including 30 million from the U.S., “will help blunt gas prices here at home.” But energy experts said the emergency measures aren’t enough to have an impact."

"Biden led the speech with Russia–Ukraine, referring to Russian President Vladimir Putin as a dictator and condemning Putin’s attack against Ukraine as “premeditated and unprovoked.” He also said multiple times that the United States will stand with the people of Ukraine and vowed to continue sending aid to the country, in addition to the $1 billion that the United States has already sent in direct assistance."

All the President’s Incoherence

"Unable to read or process the contents of the Teleprompter, Biden talked last night about 'a pound of Ukrainian people,' confused 'Ukrainian' with 'Iranian' (provoking a mouthed correction from Kamala Harris), referenced 'other freedee loving nations,' and praised the Ukrainian 'mall of strength.'"