U.S. Customs and Border Protection arrested nearly 210,000 unauthorized migrants at the southern border in March, the highest monthly total since 2000.

According to a court filing by the agency, Border Patrol encountered over 221,000 migrants at the border last month, a 33% increase from a month earlier and the highest monthly total since President Biden took office. The U.S. has made more than a million arrests at the U.S.-Mexico border since October, which is also the highest six-month total in at least 20 years. The surge comes as the Biden administration plans to end the Title 42 policy that aims to curtail the spread of COVID-19 in migrant detention facilities by allowing border officials to expel migrants before they can claim asylum. Of the 1.01 million crossings so far in 2021, just over half resulted in the migrant being expelled under Title 42.

The news was covered prominently by right-rated sources; few left-rated sources covered it. Reports from the right often highlighted Republicans and some Senate Democrats who have called on the Biden administration to keep Title 42 in place in the absence of another plan. Some coverage from the right also focused on people in border towns and communities who raised concerns vandalism and property theft stemming from the influx of migrants in the area. 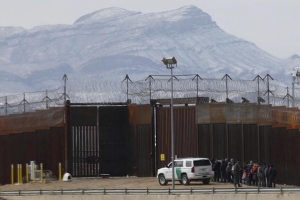 The number of migrant arrivals along the U.S. southern border soared in March to the highest levels since 2000, surpassing 200,000 for only the third time during the Biden administration, according to government statistics submitted to a federal court Friday.

Nearly 210,000 of the migrant encounters last month were recorded by Border Patrol, which arrests migrants... 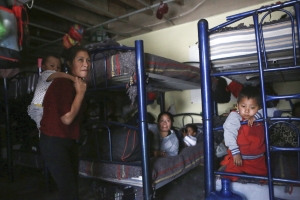 A new Department of Homeland Security report confirmed by NewsNation sources says that after Title 42 expires next month, migrant encounters could spike by a factor of two or even three times what they are now.

Title 42, the COVID-19 provision used to expel many undocumented migrants who illegally cross into the U.S, is set to expire in May.

In the month of January, immigration authorities had about 154,000 migrant encounters. In February, there were 165,000.

In March, immigration authorities stopped migrants 221,303 times along the Southwest border, a 33% increase from a month earlier,... 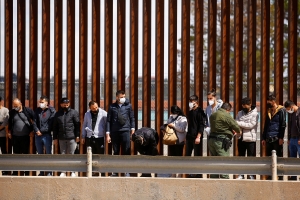 U.S. Customs and Border Protection recorded 221,303 migrant encounters at the southern border in March, according to a Friday court filing by the agency, in the highest monthly total since President Biden assumed office.

The previous monthly high was 213,593 encounters recorded in July 2021, according to U.S. CBP data. Because some migrants attempt to enter the U.S. several times, the number of encounters can include multiple attempts by the same migrant.

Of the encounters recorded in March 2022, 209,906 were apprehended by the Border Patrol after crossing from Mexico into the U.S. illegally outside...