Griner’s detainment by Russia is widely regarded as retaliation for U.S. sanctions following Russia’s invasion of Ukraine. Griner apologized to the court prior to the verdict, saying, “I made an honest mistake and I hope that in your ruling that it doesn't end my life here. I know everybody keeps talking about political pawn and politics, but I hope that, that is far from this courtroom.” Griner was also fined 1 million rubles, or a little over $16,000; reported ruble-dollar conversions ranged from $16,300 to $16,700, likely due to the exchange rate’s volatility.

President Joe Biden denounced the sentence as “unacceptable,” saying, “My administration will continue to work tirelessly and pursue every possible avenue to bring Brittney and Paul Whelan home safely as soon as possible.” The Biden administration is working on a prisoner swap deal to trade Griner and Whelan, another U.S. citizen detained in Russia, for Russian arms dealer Viktor Bout.

Coverage was widespread and mostly balanced across the spectrum on Thursday. National Review (Right bias), The New York Times (Lean Left bias) and Vanity Fair (Lean Left bias) stood out by saying Griner had been sentenced to a “penal colony.” 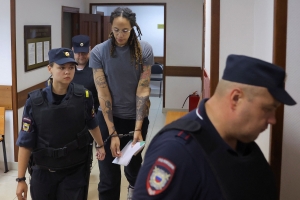 WNBA star Brittney Griner was convicted Thursday in Russia of cannabis possession and sentenced to nine years in prison — despite her insistence that she “made an honest mistake” and her tearful pleas for mercy.

Standing in a cage reserved for defendants at the Khimki court outside Moscow, Griner, 31, remained stone-faced upon hearing the verdict.

As part of the punishment phase, Griner also will be required to pay a $16,300 fine. Asked if she understood the sentence, Griner replied in English: “Yes, I understand, your honor.” 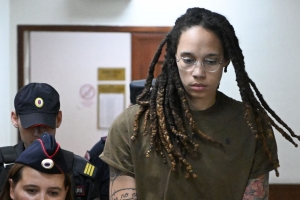 WNBA star Brittney Griner was found guilty on drug charges by a Russian court and sentenced to nine years in prison on Thursday, concluding a trial that has captured national attention and reached the highest levels of U.S. diplomacy.

Why it matters: Griner's conviction comes nearly six months after she was arrested at a Moscow airport in February, when Russian authorities said they found a vape cartridge with hashish oil in her luggage.

State of play: During closing arguments Thursday, Russian prosecutors asked that Griner be sentenced to 9.5 years in prison, AP reported. 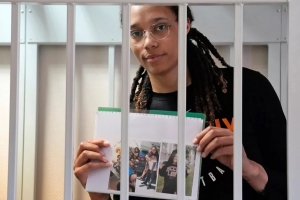 WNBA star Brittney Griner has been sentenced to 9 years in a Russian prison, on charges of smuggling drugs into the country.

Griner's lawyers said, in a statement shared with PEOPLE, that the verdict, just below the maximum sentence of 10 years, is "absolutely unreasonable" and said they will "certainly file an appeal."

A Russian judge read Griner, 31, her verdict Thursday about an hour after her lawyers and the prosecution presented their closing arguments. The Phoenix Mercury star had given an emotional speech, reiterating her stance that though she pled guilty to...

Who is Viktor Bout, the convicted arms dealer the US may trade to Russia for Brittney Griner?
Insider

Analysis
Could the U.S. get Brittney Griner in exchange for the Russian arms dealer known as the 'Merchant of Death'?
NBC News (Online)