How the White House is Handling Brittney Griner's Russia Detention

The White House is facing cross-spectrum scrutiny over its handling of WBNA star and Olympic medalist Brittany Griner's detention in Russia.

Griner has been detained in Russia since February 17 after being arrested at Moscow's Sheremetyevo airport when cannabis-infused vape cartridges were allegedly found in her luggage.  She could face as much as 10 years in prison if found guilty of drug smuggling charges, and acquittals in Russia are rare. Griner went on trial last week, and her hearings started Thursday; she pleaded guilty Thursday but stressed that she didn't intend to break the law. Griner recently wrote a letter to President Joe Biden pleading for her release, and her wife echoed that plea in a call to Biden this week.

Russia says that a prisoner exchange between the U.S. and Russia would be difficult. There was a prisoner swap in late April when Washington exchanged Konstantin Yaroshenko, a Russian pilot accused of drug trafficking, for U.S. Marine Trevor Reed.

Reports from sources across the political spectrum focused on criticism of Biden's handling of the situation. Some coverage from left-rated outlets highlighted voices who said Griner's race and gender were factors in the U.S.'s purportedly lacking efforts to negotiate her release. Some reports from right-rated outlets highlighted criticism of the Biden administration for purportedly ignoring the plight of former U.S. Marine Paul Whelan, who has been imprisoned in Russia since 2018 after being accused of spying. 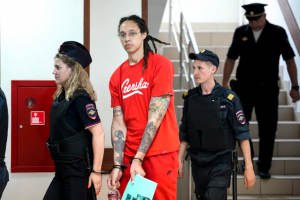 Russia continued to make its case against Brittney Griner at her trial on Thursday, more than 140 days since the WNBA star was arrested at a Moscow-area airport on drug charges.

It marks Griner's second court appearance since her trial began in earnest last Friday. A judge had previously ordered her to be detained for the length of the trial, which her lawyer has said could last up to two months and will likely involve several hearings by the prosecution before the defense gets its turn. 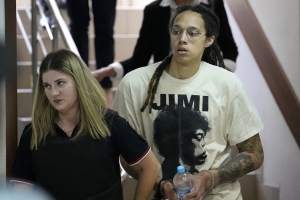 The Biden administration is facing intense scrutiny over its handling of WNBA star Brittney Griner's detention in Russia, with some questioning the White House's commitment to helping based on Griner's race and gender.

Detained in Russia since Feb. 17 on marijuana-related charges, Griner has penned a letter to President Joe Biden while her friends and family plead with the administration to help. The State Department deemed her wrongfully detained in May, and Biden met with her wife, Cherelle, on Wednesday.

"The president offered his support to Cherelle and Brittney’s family, and he committed to ensuring they...

Read full story
Some content from this outlet may be limited or behind a paywall.
See full media bias rating for Washington Examiner
From the Center
314
World
Amid Brittney Griner trial, Russia says prisoner swaps 'difficult'
Reuters 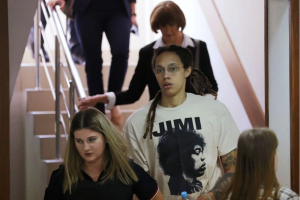 Russia said on Thursday that it was difficult to exchange prisoners with the United States and suggested Washington be silent about the fate of Brittney Griner, the U.S. basketball star detained in Russia on drugs charges.

Referring to a letter that U.S. President Joe Biden intends to send to Griner according to NBC news, Deputy Foreign Minister Sergei Ryabkov said that "hype" around the case does not help, and that "this kind of correspondence does not help".

The United States and Russia swapped prisoners in late April when Moscow released...