AllSides Media Bias Rating: Center
You disagree.
Thank you! Community votes alone don't determine our ratings, but are valuable feedback and can prompt us to do more research.
459/457 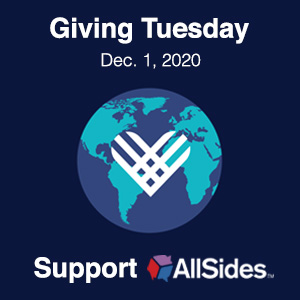 So much of society today has been fractured by angry divides driven by fake news, misinformation, and media bias.

AllSides works to reverse these divisions by helping Americans to better understand the other side and each other.

Become a sustaining member of AllSides by helping to fund us monthly.

Or support our schools program! Make a tax-deductable donation below.

Donate to AllSides for Schools

Support AllSides
Become a sustaining member to fund our work.

Or make a tax-deductable donation to our schools program.

IVN, aka the Independent Voter Network, describes itself as "a platform for unfiltered political news and policy analysis from independent-minded authors." (Source: http://ivn.us/).

July 2018 update: After using and watching IVN for a over a year, we are moving our confidence level in its rating as "center" from "Initial or Low" to "Medium". IVN has consistently published articles that represent an independent mindset rather than a partisan left or right leaning.

IVN, like all media sources, does have its own biases, and in this case there appears to be a bias toward the value of an alternative to the Republican and Democratic Party "duopoly". That would suggest a bias rating of center since it is neither left or right.

If it is truly representative of independent voters, why doesn't AllSides have a high level of confidence in its center rating? As political experts will tell you, even though "Independent" is the fastest growing and in many areas the largest political affiliation, the voting patterns of people who rate themselves as independent are often partisan in nature. People registered independent generally fall into two camps: those that almost always vote for the Democrat and those that almost always vote for the Republican. In other words, despite their self-identification of being independent, their voting behavior often mirror either registered Republicans or Democrats.

In other words, even if you are "independent", you can still be "left" or "right" in your voting behavior and political biases. IVN for its part has earned its rating as center. Readers should recognize that "center" is not the same thing as neutral, and that IVN is not neutral in that it does often advocate for alternatives to the Democratic and Republican Party as well as reforms to change the status quo.

Campaign Finance
How Many Republicans is George Soros Backing in November?

Campaign Finance
How Many Democrats Are The Koch Brothers Backing in November?

Politics
The Gerrymander Case: Who Speaks for the Country?

Immigration
What’s Changed? Here are the Positions of Recent Presidents on Immigration