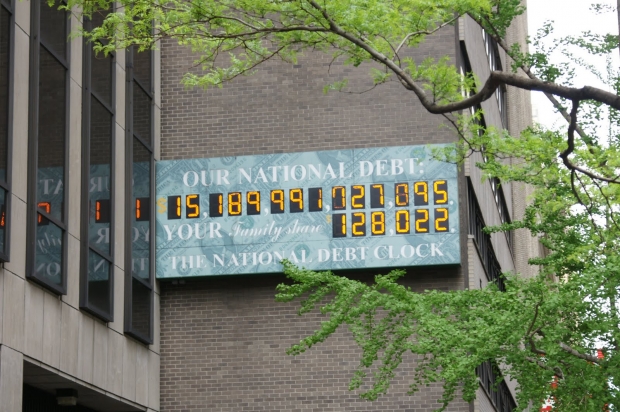 Few Americans think partisan bias affects their own reasoning. Yet many of us jump to prejudiced assumptions without even realizing it. Biased reasoning can sidetrack us or cause us to make illogical leaps that don’t actually support our premise.

Take the federal deficit for example. Voters often let tax quarrels and other partisan disputes divert their attention from the irresponsible behavior of both parties, allowing bad practices to continue.

As of August 2015, our National Debt is $18,152,809,942,589 and growing rapidly. That’s about $57,000 for every man, woman and child in the United States. In 2014, taxpayers spent more than twice as much on interest payments as they did on transportation infrastructure, and over three times as much as they spent on education. But because of the budget deficit, we have no chance of ever slowing the growth of our debt.

Whenever politicians address the deficit problem, it always seems to turn into a dispute over taxes. But the truth is that spending and taxes are two different issues.

U.S. tax laws are often unfair and inequitable. As I’ve talked about before, the corporate world is intimately involved in law creation, with armies of lawyers and lobbyists at work to pass advantageous tax rules. The result is a distorted system in which some businesses pay substantially less in taxes than others.

Our byzantine individual tax laws are so complex, even IRS officers aren’t always sure of the answers. This is alarming for multiple reasons: not only does it allow some people to find ways to avoid paying their share, but if you or I honestly misinterpret a law and pay the wrong amount, we can be fined or even go to jail.

But the fact that our tax codes need to be overhauled shouldn’t distract us from another critical fact: in the early 20th century, the government’s budget was only 6.9% of our gross domestic product. A hundred years later, it spends 35% to 40% of GDP.

Regardless of how the tax burden is distributed, the U.S. government spends a much bigger portion of the pie than ever before.

Politicians aren’t blind to our debt problems.  But key problems are typically ignored by both voters and legislators:

Back in August 2011, Democrats and Republicans promised to work together through the Budget Control Act. The White House issued a press release assuring that, among other things:

In the 2011 “bipartisan victory” press release issued by the White House, the administration called the deal “A DOWNPAYMENT ON DEFICIT REDUCTION BY LOCKING IN HISTORIC SPENDING DISCIPLINE” (their bold and capital letters, not mine).

In the ensuing 17 months (during which time President Obama as well as many senators and congressmen were re-elected), both Democrats and Republicans failed to budge in any negotiations, delivering on none of these promises.

When an automatic “sequester” budget cut of 1.2% kicked in, the President called it “brutal” and “severe.” (Though after many media stories proved this to be an overstatement, he backpedaled, changing his protest to, “This is not the apocalypse. It’s just dumb.”)

But if shaving a small percentage of their original agreement was so arduous, how are we to believe that our representatives ever intended to hold up their “historic” pact in the first place?

This would be similar to the following scenario in the private sector: Ford promises a car that will get 60 miles to the gallon. After choosing it, you learn the car actually has the same mediocre gas mileage as your old car. When you complain, you’re told by Ford’s CEO that it’s simply impossible to get that kind of mileage without taking the doors off.

Of course, the company expects you to buy their cars again next time.

The House and Senate have not agreed on a budget since 2009. Another government shutdown is anticipated this fall. As usual, expect politicians to keep us sidetracked on specific spending and tax battles, while diverting our attention from the deeper issues within our political system.

Taxes are inequitable and tax reform must be addressed, but that doesn’t solve the problem of a government that can’t curb its spending.

If we focus on the roots of our problems rather than partisan battles, congressmen would have less incentive to pass the blame to the other party and more motivation to find solutions together.