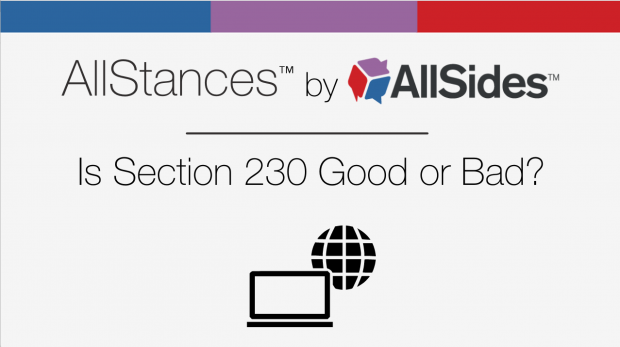 Is Section 230 necessary? Does it harm free speech? Does it enable misinformation? How should we change it, if at all?

Explore all perspectives, stances, and arguments for and against Section 230 and the regulation of online platforms with AllStances™ by AllSides.

Section 230 of the Communications Decency Act (CDA) protects online companies from liability arising from what is posted on their platforms. It allows web hosts, such as Twitter and Facebook, to allow its users to post practically any content without making the web host liable. It also permits the web host to edit and restrict access to content posted by users and third parties, even if the material would be constitutionally protected. As tech giants like Google, Facebook, and Twitter have risen to prominence and now choose what speech and content to allow or ban, the clause has become highly controversial.

Enacted in 1996, The Communications Decency Act was originally created because at the dawn of the internet, many lawmakers were concerned about the internet’s ability to promote “filth,” like child pornography and violence.

Senator Ron Wyden (D-OR) and Representative Chris Cox (R-CA) ensured Section 230 of the CDA was added at the last minute in 1996 “to protect the unhindered growth of the internet and free speech.” They were particularly concerned about Stratton Oakmont, Inc v. Prodigy Servs. Co., a 1995 court case which found an online bulletin board operator liable for content posted by users. To circumvent the court’s decision so that online content platforms would not be required to moderate all content posted by their customers and publishers, Section 230 freed online service providers from the legal responsibility of publishers.

According to the Congressional Research Service, “Courts have interpreted Section 230 to foreclose a wide variety of lawsuits and to preempt laws that would make providers and users liable for third-party content.” Section 230 immunity allows service providers, like Twitter and Facebook, to “act in good faith” to restrict content that provokes violence, is obscene, or is overly explicit.

Nearly 20 years later, Section 230 is widely viewed as one of the most impactful and influential pieces of legislation ever created when it comes to the media and the U.S. information economy.

Platforms’ unregulated ability to moderate content strikes at the crux of an accelerating debate between legislators, corporations, and now, billionaires. Mainstream rhetoric on both sides of the aisle in Washington calls to reform or abolish Section 230, but for very different reasons.

Explore all the arguments, stances and perspectives around Section 230 and the regulation of online platforms. Keep in mind that stances aren't mutually exclusive — some people might have viewpoints that align with multiple stances.

Stance #1: Reform or Revoke Section 230 to Prevent Bias Against Conservatives

Core Argument: The moderation practices of online platforms are no longer consistent with the spirit of Section 230, which was designed to promote free speech.

Core Argument: The impact of changing Section 230 is unpredictable and will have chaotic outcomes.