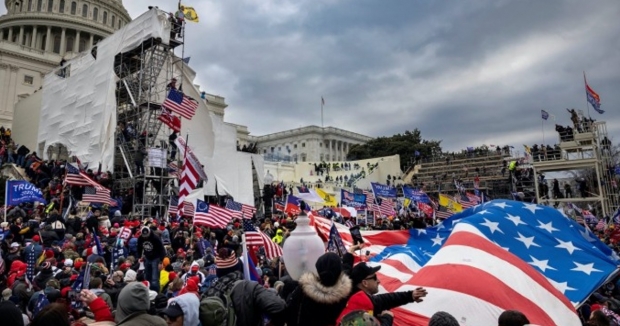 The one-year anniversary of the Jan. 6 Capitol riot, coupled with the House select committee's ongoing investigation, divided media coverage throughout the week.

The House's Jan. 6 committee is expected to soon go public with findings from its probe of the riot and former President Donald Trump's efforts to discredit the result of the 2020 election. Trump planned to speak publicly about the 2020 election on the anniversary, but canceled and scheduled another speech for Jan. 15.

Left- and center-rated outlets have focused on the Jan. 6 committee's investigations, the trials of Jan. 6 rioters and who they are, and Trump's role and culpability. Many also analyzed the potential for a similar incident in the future and how to prevent it. Right-rated outlets have focused less on Jan. 6 overall this week. Some criticize the left's framing of Jan. 6 as biased and exaggerated and say the House committee's work has been hyperpoliticized and anti-Trump. Some on the right argue that the riots, violence and property damage that accompanied some Black Lives Matter protests during the summer of 2020 deserve more attention than Jan. 6, but are ignored by Democrats and media outlets for political reasons.

The New York Times editorial board (Left bias) recently published a column titled "Every day is Jan. 6 now." National Review (Right bias) writer Jim Geraghty (Lean Right) criticized that argument and accused the Times of "obscuring instead of illuminating," while also saying he believed rioters should be prosecuted.

"In a Momentive poll conducted Jan. 4-5, 2021 just ahead of Biden's certification, 58% of Americans said they accepted that Biden had legitimately won the election. That number is now at 55%, essentially a wash from a year ago. About 57% of Americans — about half of Republicans and seven in 10 Democrats — say more events similar to Jan. 6 are likely to happen in the next few years."

725 suspects were arrested in the year since the Capitol riot, DOJ announces. The FBI is looking for 350 more.
Insider

"There are many more people at the riot whom the FBI has yet to identify. The DOJ release said that agents are seeking at least 350 more people they suspect of violent acts, including 250 they say assaulted police officers."

Corporate Media’s Jan. 6 Anniversary Coverage Is All About Silencing Republicans
The Federalist (opinion)

"Yes, the riot was bad and should have been put down with overwhelming force — just as the riots all throughout the summer and fall of 2020 should have been. But the actions of a relatively small group of rioters that day have absolutely nothing to do with the perfectly valid efforts of GOP lawmakers to ensure that election rules are not changed at the last minute by unelected judges or public health officials. "

"They were there to: Have their voices heard. Register concern over election accuracy. Overthrow the government? The narrative of that day depends on who is telling the story. The loudest narrative, the one that demonizes attendees, comes from the federal government, politicians, and many media outlets."

How to Stop Trump and Prevent Another Jan. 6
Thomas L. Friedman (opinion)

"If the majority of G.O.P. lawmakers continue to bow to the most politically pernicious “alternative fact” — that the 2020 election was a fraud that justifies empowering Republican legislatures to override the will of voters and remove Republican and Democratic election supervisors who helped save our democracy last time by calling the election fairly — then America isn’t just in trouble. It is headed for what scientists call 'an extinction-level event.'"

"Donald Trump supporters' violent attack on the Capitol has been the subject of a dishonesty campaign that began amid the fog of January 6 and escalated even as the facts became clearer. Trump, some right-wing media figures and some Republican members of Congress have mounted a sustained effort to rewrite the history of that deadly day."