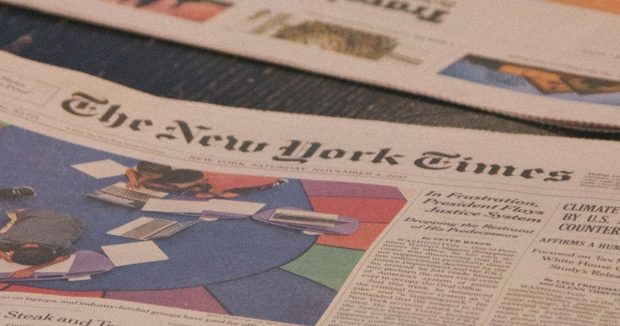 The U.S. airstrike that killed Iranian Major General Qasem Soleimani and six others on Jan. 3 in Iraq brought escalating tensions between the U.S. and Iran in the Middle East to a head, thus becoming a dominant topic in American politics and a widely-covered issue in the news media. As with nearly any story that dominates the news media, media bias was on full display in the subsequent coverage.

The news cycle on Jan. 6 was commanded by coverage of Soleimani’s funeral, U.S. military announcements, and the range of reactions from around the world. But some prominent outlets reporting on the day’s events didn’t provide the story's full scope, illustrating a notable type of media bias: bias by omission.

A story published to National Review’s “News” section at 4:04 p.m. covered an announcement from Detroit’s Consulate General of Iraq made on social media describing an event scheduled to honor “lives of the martyrs who have fallen as a result of the recent American raids in Iraq.”

The story included three quotes: a quote from the original social media posting, a quote from an FBI special agent, and a statement from a local Republican political action committee.

The portion quoting the PAC reads:

Michigan Rising Action, the local arm of the Republican America Rising PAC, called on Michigan Democrats to denounce the event in a statement.

“Soleimani is a known terrorist with the blood of many Americans on his hands. We call on Rep. Tlaib, Sen. Peters, Rep. Slotkin, Rep. Dingell, Rep. Lawrence, and Rep. Stevens to immediately denounce this action being taken by the Iraqi Consulate in Detroit,” Tori Sachs, executive director of Michigan Rising Action, said in part.

This is the only quote in the story that offers an opinion on the event, minimizing other points of view. This quote’s loneliness in the story implies that it’s the prevailing viewpoint. By omitting all opinions and perspectives on the news except for one, the outlet falls short of giving readers the whole story.

As part of its “Live Updates” on Soleimani’s funeral in Tehran on Monday, New York Times reporters covered statements from Iranian officials and others among the hundreds of thousands of people in attendance.

When describing the funeral’s audience, the Times offered a quote from a 22-year old university student who was in attendance: 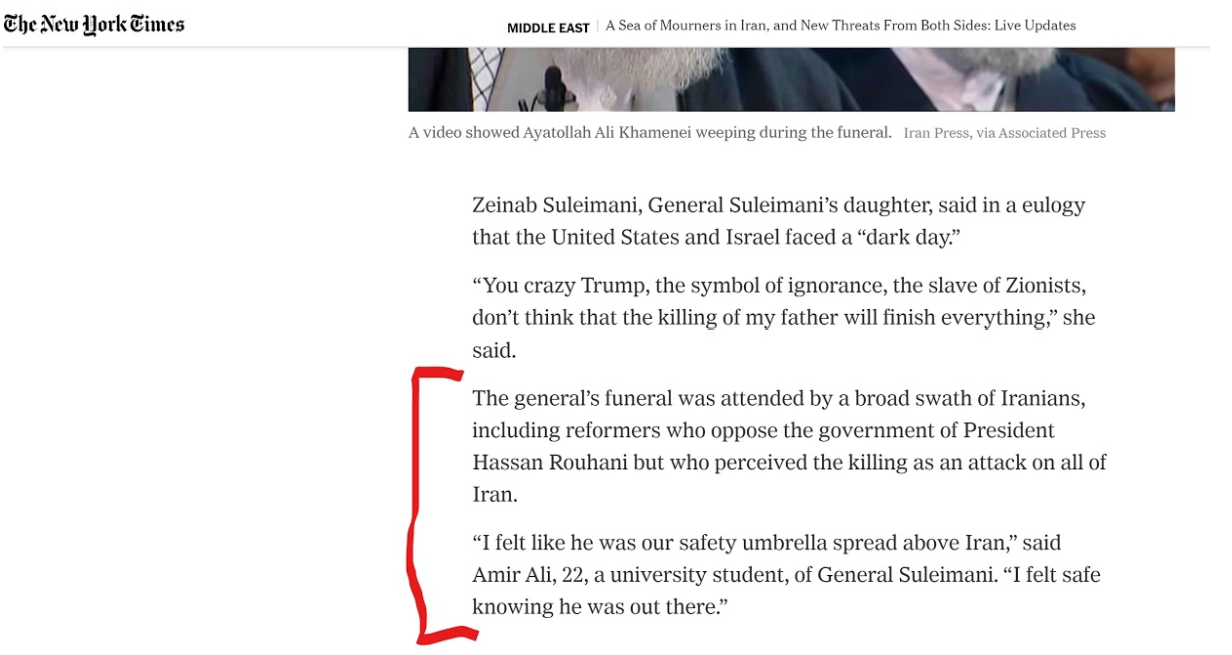 The portion quoting the mourner reads:

The general’s funeral was attended by a broad swath of Iranians, including reformers who oppose the government of President Hassan Rouhani but who perceived the killing as an attack on all of Iran.

“I felt like he was our safety umbrella spread above Iran,” said Amir Ali, 22, a university student, of General Suleimani. “I felt safe knowing he was out there.”

While several other sources are quoted on different topics and in different contexts throughout the story, including officials who made statements at Soleimani’s funeral, this quote is the only one from an average citizen who was in attendance. Its singularity implies that it is the prevailing or most common viewpoint among the funeral attendees. Only offering one perspective out of the thousands of people in attendance leaves readers with an incomplete picture of the day’s events and the public’s opinion of them.

Bias by omission can take multiple forms; it occurs when media outlets choose not to cover certain stories or omit information that would provide an alternative viewpoint. In both of these stories from the National Review and the New York Times, alternative viewpoints that would have provided a fuller picture were omitted. Of course, space constraints mean media outlets can’t perfectly cover every single opinion out there, but we should train our brains to take note when other perspectives are left out. Bias by omission, like many types of media bias, reminds us to make a habit of reading multiple media outlets in order to get the full story.

Henry Brechter is the Daily News Editor at AllSides. He has a Center bias.
This piece was reviewed and edited by Julie Mastrine, Director of Marketing at AllSides; she has a Lean Right bias.