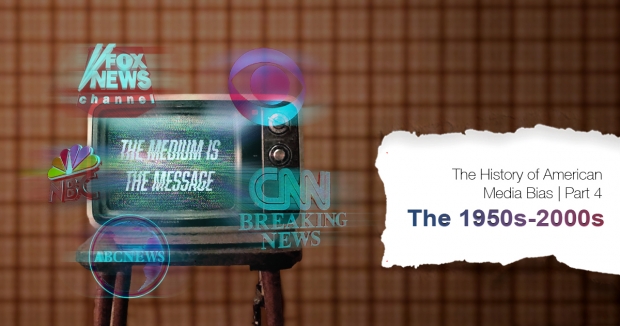 Today, we hold journalists and media outlets accountable to a journalistic code of ethics and a set of standards, which include truth, transparency, and objectivity. When journalism strays from objective fact, the result is media bias. And though it takes different forms in the digital age, media bias is far from new.

Through the years, media bias in America has been shaped by three things: the medium through which the news is produced (printing press, mass media, television, radio, internet, etc.), the entity that produces the media, and the ethical standards the news entity is held to.

AllSides previously explored media bias at the dawn of American history in the 1700s, as the nation developed in the 1800s, and in the first half of the 20th century — now let’s get caught up on the last half!

The Impact of Television News On Americans

In the last half of the 20th century, the media industry moved away from the written word and television became an established source of news. As a result of this shift, however, the same news story could now be received much differently depending on whether one read the paper or saw the TV program.

Marshall McLuhan, a popular media theorist in the 1960s, coined the phrase, “the medium is the message,” which argues that all forms of media are extensions of human senses, bodies and minds, and that the different mediums through which the audience receives information have different psychological effects on the human brain. In Understanding Media: The Extensions of Man, McLuhan described the written word as linear and grounded in context, providing a “fixed points of view and perspective” while television “suspended judgment” in its immediacy and emotion and does not require context.

On the difference between a word-centered culture and an image-centered culture, another media theorist, Neil Postman, wrote about this in his 1985 book Amusing Ourselves to Death: Public Discourse in the Age of Show Business, saying that before television, public figures were known by their written words, “not by their looks or even their oratory...Think of Richard Nixon or Jimmy Carter or Billy Graham, or even Albert Einstein, and what will come to your mind is an image, a picture of a face, most likely a face on a television screen (in Einstein's case, a photograph of a face). Of words, almost nothing will come to mind.”

Because of this, Postman expressed concern that television news content will inevitably become more optimized for that medium. The television commercial, Postman argued, “has oriented business away from making products of value and toward making consumers feel valuable.” Postman said that in America, the television commercial has been the central instrument in creating the modern methods of presenting political ideas.

Postman points out that Edward R. Murrow's "Person to Person" camera crew came into John F. Kennedy’s home for a segment while Kennedy was running for office, and Richard Nixon made an appearance on a commercial-themed comedy show. “By the 1970s,” he wrote, “the public had started to become accustomed to the notion that political figures were to be taken as part of the world of show business.” The “likeability” of a presidential candidate became essential, since Americans  increasingly casted their votes based on how a presidential candidate made them feel.

The Nixon-Kennedy debates during the 1960 presidential election were the first to be televised and exemplified the crucial role that television would continue to play in politics. On camera, Nixon, fatigued from the campaign trail and a recent illness, was held up against the young, handsome and charismatic Kennedy. While the two had similar stances on several policies and were more or less evenly matched in the debate, radio listeners were more likely to call the debate a tie or declare Nixon the winner, while Kennedy’s charm won over the majority of television viewers.

The Media Makes a Left Turn

The rise of television inevitably brought on the decline of print newspapers. However, this led to a lack of diversity of news sources available from each medium. Fewer newspapers and just three news television channels — NBC, ABC, PBS — meant large mainstream outlets had a monopoly on the news industry, and, subsequently, on public information. In an effort to combat this, the FCC’s Fairness Doctrine, established in 1949, required TV news broadcasters to share contrasting views. However, the Fairness Doctrine was removed in 1987, and many consider the removal to be a cause of the widening political polarization we see in the media today.

Without the Fairness Doctrine, the media has moved left over time. By the 1970s, universities developed journalism degrees, which led to a marked difference in the bias of reporters that shifted much of the zeitgeist of the industry. Bruce Thorton wrote that previously, many reporters worked their way up from being copy-kids or obituary writers, and as such, their biases reflected class as much as political ideology. However, once reporters started attending universities, they were “shaped by the leftist perspective of these institutions,” Thornton said. “These perspectives, once marginal in American public discourse, became increasingly prominent in the press and television news shows.”

The rise of Fox, CNN, and cable television networks in the 1980s, however, created more news sources with alternative views, added competition for mainstream media and gave way to the competitive renaissance of news sensationalism. Once there were more unique choices offering missing perspectives, many Americans started exclusively tuning in to those channels, creating “filter bubbles” for themselves by only getting their news from one source.

In the 2000s, the spread of the internet as a new medium once again changed the news industry and advanced the “filter bubble” problem. Stay tuned for more on that in the final part of our History of Media Bias series!