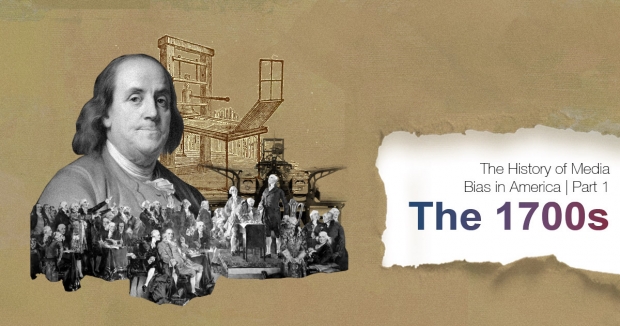 Today, we hold journalists and media outlets accountable to journalistic code of ethics and a set of standards, which include truth, transparency, and objectivity. When journalism strays from objective fact, the result is biased news. And though it takes different forms in the digital age, this media bias is far from new.

Political bias has been present in journalism since the dawn of the printing press, when the expense of press equipment limited media production to the wealthy and powerful, and tended to serve their interests. In the 1900s, Americans began to recognize the capacity for journalism as a powerful societal force, and developed standards of objectivity and transparency to keep the media in check.

Through the years, media bias in America has been shaped by three things: the medium through which the news is produced (printing press, mass media, television, radio, internet, etc.); the entity that produces the media; and the ethical standards the news entity is held to.

The Press in Colonial America

One cannot begin to discuss the history of American media without mentioning Founding Father Benjamin Franklin, who also emerged as a founder of modern journalism in the colonial period. Franklin achieved much success and fame through his contributions and often published works advocating for speech and press freedoms; however, it soon led him to address potential issues with how the American press functioned.

Franklin became owner and publisher of the Pennsylvania Gazette in 1729, where he often published his own works under a pseudonym. He also owned a printing shop where he published everything from political pamphlets to currency.

In colonial times, newspapers and media were mostly advertisements for property and farms, or ads for runaway slaves. However, as the Revolution began, both Franklin and the opposing side recognized the use of the press to distribute pamphlets advocating for freedom from British rule.

Revolutionists also recognized the ability of the press to keep all Americans engaged with the war, even when it happened in distant locations across the country. Over 30 weekly newspapers existed at the Revolution’s outset; these papers often exchanged stories so that the same information could reach other cities, much like today’s news wires. In this way, newspapers helped unify the fragile thirteen colonies by treating readers as part of one large community — a concept media theorist Benedict Anderson calls print capitalism. This ensured the colonies would support each other when the Revolution began in 1775.

Just before the turn of the century, the young country became split ideologically between the Jeffersonian Republicans and the Federalists, and, as a result, so did the press.

The Democratic-Republican party, led by Thomas Jefferson, supported putting power in the hands of everyday Americans and opposed strong central government, which was supported by the Federalists. The Jeffersonian Republicans favored support of France during the American Revolution. Hamilton, one of the authors of the First Amendment, used the press to wage a fierce war for the Constitution. Hamilton, along with James Madison and John Jay (under a pseudonym) published a series of 85 essays advocating for the ratification of the Constitution in New York newspapers such as the Independent Journal and the New York Packet. The essays were later compiled into the Federalist Papers in 1788.

Creation of the First Amendment, and A Warning of the Press as a “Fourth Institution”

In 1789, the First Amendment of the newly-signed U.S. Constitution stated that “Congress shall make no law abridging the freedom of speech or of the press” to ensure the press would continue in the role it played as a backbone of liberty during the Revolutionary War, and to be critical of government and protect that freedom.

That same year, Franklin, with clarity and foresight, published an essay titled An Account of the Supremest Court of Judicature in Pennsylvania, viz., The Court of the Press. In it, he criticized the function of the American press and its potential impacts on society. His analysis focused on the risks of considering the press an informal “fourth institution,” and relying upon it to keep the government accountable but largely unchecked.

He described two potential risks: First, creating in the press a group or “class” who, rather than simply reporting information, passes judgement like a “court”; and second, of allowing said press group to become tyrannical in its rule or influence of the readers’ mind.

In one sense, Franklin wrote, the press has the power of a “court” of law: it can "judge, sentence, and condemn to infamy” to those subject to its jurisdiction — public figures and private citizens alike — and in doing so imitates the moral authority of a legal court. However, the press executes these judgements without being "governed by any of the rules of common courts of law” because it is not part of an official legal system bound to evidence and precedent.

The press is also able to initiate investigation without any citizen complaint, but rather in its own biases or interests. In a second sense, the media resembles a religious “court” by way of heretical inquisition, shaping belief in readers through fear by crucifying individuals in the pages (at this point in his writing, Franklin referenced the Spanish Court of Inquisition). In other words, cancel culture is older than you’d think.

Again, Franklin observed that the press implies moral authority — perhaps even sovereignty — in its tendency and confidence in the execution of moral judgements, and consequently, punishments.

Franklin also sometimes saw the media’s relationship with law as problematic. He saw potential for the press, in its government watchdog setup, to become dangerous in its ability to guide public opinion away from or against the law itself (though relying on the law for its freedom) in the interest of maintaining its superiority and influence over public opinion.

As a result, Franklin urged citizens to be zealous in keeping the press in check to abuses of press freedoms. He even went so far in his essay to say in jest, “If an impudent writer attacks your reputation, dearer to you perhaps than your life, and puts his name to the charge, you may go to him as openly and break his head.”

During a war scare in 1798, paranoia turned Americans against the French. In their newspapers, the Federalists published articles suggesting Republican leaders’ affinity for the French made them dangerous. Shortly after, Congress published the Alien and Sedition Acts of 1798, which restricted foreign residents and gave the government permission to deport any residents suspected of plotting against the government, restricted any publications which spoke against Congress or the president, and made it illegal to conspire to oppose any government measure. This backfired on the Federalists, however, when 25 people — including prominent newspaper editors and judges who opposed the Acts or supported Republicans — were indicted under the Acts.

Franklin’s fears about the media’s role ultimately came true in the next century. The 1800s saw the birth of mass media, thanks to the Industrial Revolution’s advances in printing technology. Widespread newspapers, hand-in-hand with the Jacksonian expansion of democracy, laid the foundations to shape partisan media bias as we know it today. More on that in Part 2!