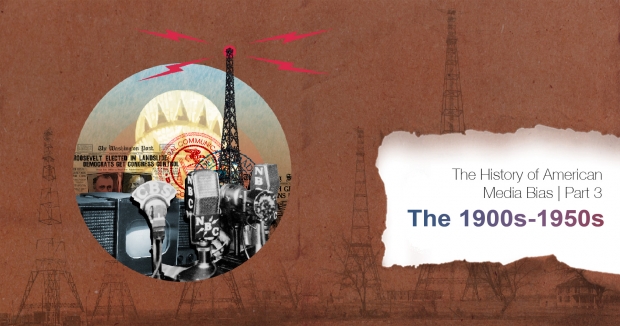 Click here for Part 1 of this series: The Press in Colonial America and Creation of the 1st Amendment and Part 2: The 1800s.

Today, we hold journalists and media outlets accountable to journalistic code of ethics and a set of standards, which include truth, transparency, and objectivity. When journalism strays from objective fact, the result is media bias. And though it takes different forms in the digital age, media bias is far from new.

Through the years, media bias in America has been shaped by three things: the medium through which the news is produced (printing press, mass media, television, radio, internet, etc.), the entity that produces the media, and the ethical standards the news entity is held to.

AllSides previously explored media bias at the dawn of American history in the 1700s and as the nation developed in the 1800s— now let’s move on to the 20th century!

Objectivity and Influence: A Tale of Two Purposes

Following sensationalist newspapers and subsequent drama between competing papers in the late 1800s, news publishers in the early 1900s began to see a need for objectivity and ethical standards in journalism. Many newspapers developed their newsrooms’ individual editorial standards; to this day, the Washington Post’s journalists adhere to their set of guidelines established in 1935.

In 1912, the American Society of Newspaper Editors (ASNE) was formed as a membership organization for editors, producers or directors in charge of journalistic organizations or departments, as well as deans or faculty at university journalism schools. In 1922, the ASNE wrote up guidelines that went on to inspire the Society of Professional Journalists’ Code of Ethics, which is the standard most newsrooms today adhere to. (AllSides’ News Curation Principles are loosely based on the SPJ’s code.)

Those standards include a responsibility to report the truth with accuracy, a commitment to objective reports and to distinguishing between news and opinion, a resolve to act independently and avoid conflicts of interest, and a respect for people involved in the news. The “inverted pyramid” format of reporting, still used today, became popular during this time as well. The inverted pyramid format dictates that the most important fact in each article be found in the headline, and the first paragraph contains the most important facts. Then, the subsequent paragraphs are written in descending order of newsworthiness/importance.

However, media bias did not at all disappear once these standards were introduced. The journalists who created the code of ethics likely held that editorial partisanship was incompatible with the reporters’ code of ethics and the purpose of journalism. Yet historian Willian Chilton wrote that the elitist, progressive movement during this time still promoted the idea that the media’s purpose was to shape the beliefs of voters, since the public was presumably too irrational to make the right choice based singularly on fact.

“The presentation of facts simply as facts, editors and writers reasoned, cannot accomplish the exalted goal of saving civilization,” Chilton wrote. “To do that, facts needed to be presented according to those rhetorical patterns of thought we call opinions, patterns pointed in some particular direction of convincing an imagined jury.”

When it came to influencing public opinion, journalists very likely did so in alignment with their own values and interests, though some may have claimed to be impartial. Other types of bias could be found beyond reporting and writing bias. For instance, editorial bias can be displayed in story choice, interviews, quote selection, headlines, emphasis and framing within the story and story placement on the page. These types of biases, called selection bias, occurred throughout the history of journalism and are still noticeable today.

The objective approach to journalism attempted to eliminate bias so readers could be presented with factual information, and the progressive approach encouraged bias in the name of the greater good. With these dueling purposes in the back of many journalists’ minds, a sense of objective elitism was born into the journalism industry.

Jim Kuypers wrote in the book Partisan Journalism: A History of Media Bias in the United States that “journalism had, for the most part, committed itself to objectivity, but as we have seen, a very powerful undercurrent of elite, moralistic progressivism ran under the surface, constrained only minimally by loosely constructed concepts of professionalism.”

Objectivity and nonpartisanship were thwarted early by the development of radio news networks in the 1930s and 1940s, followed by television news in the 1950s. News corporations like NBC and CBS began running sponsored news programs to pay for equipment. The new format of radio as opposed to paper encouraged news programs to become more entertaining in order to compete with radio dramas and comedy shows. Some reporters hosting news programs became household names as citizens tuned in daily to hear updates. As hosts conversed with each other on air, some commentary and opinions would frequently get mixed in with the news as well.

As amateur and professional radio stations began popping up around the country, the U.S. government developed regulations for the industry. The Radio Act of 1927 created the Federal Radio Commission (FRC), which set standards and frequencies as well as license stations. The Federal Communications Commission (FCC) took over the FRC in 1934 and continued to work with radio stations to assign frequencies and set national standards. In the 1950s, television sets became a fixture in American homes. Major networks such as CBS, NBC, and ABC, who had all seen success with radio programs, shifted to television news programs.

Murrow saw great success when he began his own television program in 1951. When Senator Joseph McCarthy began his endeavor to expose Americans with Communist ties and other left-wing “loyalty risks” to the government, Murrow ran an expose on his program in 1954 that some argue played a key role in the senator’s downfall.

In his monologue during the episode, Murrow called upon his audience to take action, saying, “This is no time for men who oppose Senator McCarthy’s methods to keep silent, or for those who approve. We can deny our heritage and our history, but we cannot escape responsibility for the result. There is no way for a citizen of a republic to abdicate his responsibilities. As a nation we have come into our full inheritance at a tender age. We proclaim ourselves, as indeed we are, the defenders of freedom, wherever it continues to exist in the world, but we cannot defend freedom abroad by deserting it at home.” This is another example of a media elite using the news platform to shape audiences’ perspective in the name of the greater good. In this moment, Murrow became more of an activist, displaying advocacy journalism — crossing the thin line of objectivity and entering into the territory of advocating for the "greater good,” a type of journalism that still cuts through the industry today.

This era exemplifies how modern media bias in America was shaped through radio and television, and how journalists’ view of their role and purpose in media came into question when ethical standards were put into place. In part 4, we’ll explain how these dueling ideas evolved in the late 1900s and at the turn of the century with the advent of the internet and social media.