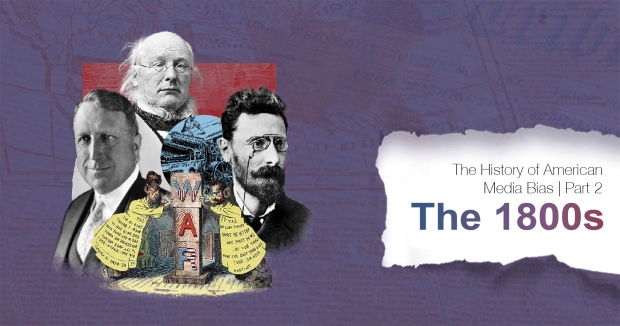 Click here for Part 1 of this Perspectives series: The Press in Colonial America and Creation of the 1st Amendment.

Today, we hold journalists and media outlets accountable to journalistic codes of ethics and a set of standards, which include truth, transparency, and objectivity. When journalism strays from objective fact, the result is media bias. And though it takes different forms in the digital age, this media bias is far from new.

Through the years, media bias in America has been shaped by three things: the medium through which the news is produced (printing press, mass media, television, radio, internet, etc.), the entity that produces the media, and the ethical standards the news entity is held to. We explored media bias in 1700s colonial America in part one of this series — now let’s move on to the 1800s.

The Role of the Press in a Young Country

The turn of the century in the newly created United States brought with it the tumultuous election of 1800, arguably one of the most controversial elections in American history. It resulted in a constitutional amendment, was the first time presidential candidates campaigned for president, and featured media bias as an emerging force in American politics.

Though candidates did not give speeches or engage in debates, many of the campaigns running up to the 1800 election resembled modern campaigns. The media was used to make attacks on political opponents’ character and personal life, and each candidate was often portrayed as a caricature of themselves. Federalists insisted Jefferson was a coward who fled to France during the Revolutionary War, and that the ideas he picked up there were too radical; Aaron Burr was often portrayed as a power-hungry man without principle.

After Jefferson’s victory was decided in the House following an Electoral College tie between two running mates on the same ticket, the 12th Amendment was added to the Constitution. It allowed vice presidents and presidents to run on the same ticket. This changed the scope of American elections, but the highly partisan news coverage of the election — and Americans’ reliance on partisan sources during that time — established a legacy of its own.

In the decades following, the Industrial Revolution and advances in printing technology made newspapers much more widespread. Newspapers helped a rapidly growing country forge a sense of national identity by treating readers as part of one large community — a concept media theorist Benedict Anderson called print capitalism. However, as newspapers helped to keep the young nation on the same page, the political landscape split again in the 1820s as certain states began to favor the two-party system.

The bipartisan system became widespread in the late 1820s during Andrew Jackson’s presidential campaign, and has dominated American politics ever since. At this point, the press was largely used to promote political parties — the Democrats and the Whigs. Newspapers, along with other media such as pamphlets, political cartoons and paintings, taught Americans to forge a sense of their political identity by teaching them to think of themselves as either a Democrat or a Whig.

Partisan U.S. media expanded in the 1800s, but so did acknowledgements that more credible sources were needed. Horace Greeley, who helped found the Republican party in the 1850s, founded the New York Tribune in 1841 in an effort to provide readers with a reliable news source.

Greeley also conceptualized the editorial page, which created a clear and important distinction between news and opinion. Greeley and the Tribune staff made frequent use of the editorial page to voice their own opinions and political views, and had much sway over public opinion. Later on in 1921, Herbert Bayard Swope of the New York Evening World would develop the op-ed page, or the opposite editorial page, where he, as he said, “decided to print opinions, ignoring facts.”

The modern op-ed page, where people from diverse backgrounds and viewpoints can submit opinion articles, was developed in 1970 by the New York Times. While the goal of the modern op-ed page is to democratize discourse, Greeley’s editorial page was likely developed with the goal of influencing public opinion. Historian Willian Chilton wrote that the progressive movement during this time promoted the idea that the media’s purpose was to shape the beliefs of voters, since the public was too irrational to make the right choice based singularly on fact.

“The presentation of facts simply as facts, editors and writers reasoned, cannot accomplish the exalted goal of saving civilization,” Chilton wrote. “To do that, facts needed to be presented according to those rhetorical patterns of thought we call opinions, patterns pointed in some particular direction of convincing an imagined jury.”

This can be seen in Greeley’s outspoken support of Abraham Lincoln’s presidential campaign, and his support for the abolition of slavery during the Civil War. In 1862, he published an editorial titled “The Prayer of Twenty Millions” that called for the emancipation of enslaved people. Lincoln wrote a response to Greeley in the New York Times, which contained an often-quoted passage: “If I could save the Union without freeing any slave, I would do it; and if I could save it by freeing all the slaves, I would do it; and if I could do it by freeing some and leaving others alone, I would also do that.”

A Populist, Sensationalist Media is Born

The late 1800s saw the rise of “penny papers,” low-cost daily newspapers whose oft-sensational coverage favored murder, scandal and other human interest subjects over politics. Joseph Pulitzer purchased the New York World in 1883 and used emotive headlines to advocate against government corruption and injustice. By the mid-1890s, the World had the largest circulation in the country.

William Randolph Hearst, who had already built the San Francisco Examiner into an influential West Coast paper, purchased the rival New York Journal in 1895. Hearst drummed up major competition with the World, using even more outrageous headlines and features. He also hired some staff away from Pulitzer, including cartoonist Richard F. Outcault, who had drawn an immensely popular comic picture series, The Yellow Kid, for the World. George B. Luks took over the drawings of the cartoon for the World, and the two feuding papers drew so much attention that the competition came to be described as “yellow journalism.”

The rivalry and its subsequent widespread circulation developed large followings for both papers, and many headlines in outlets across America became increasingly sensationalized in an effort to mirror the success of the two papers. The World began a gradual decline after the turn of the century, but similar banner headlines and attention-grabbing ledes remain a staple of American journalism today.

There were positive and negative consequences of the penny press. Journalist Andrew Belonsky of the Daily Beast argues that the affordability and availability of penny papers “made the free press a true friend of the people.”

“By disconnecting newspapers from larger political and economic apparatus, [penny papers] made the news of and for the people,” writes Belonsky. “By treating the public as though their lives were just as worthy as bold-faced names, penny presses showed the public that they mattered. They invited previously disregarded masses into the fold, expanded civil society, and made America more authentically American. Quite simply, they rebalanced the power.”

Before advances in printing technology made penny papers possible, news content served the interest of the publishers, who were often looking to advance their own political interests. The penny presses allowed publications to gain a wide circulation and generate revenue through advertising, so they no longer had to rely solely on patrons with political agendas. However, this gave newspaper audiences, instead of patrons, a newfound influence over the content of the newspapers based on what sold and what didn’t.

Some argue that the driving force behind sensationalism and political polarization in contemporary media lies “not in underlying political opinions but in costs, specifically the falling costs of new entrants.” In 2005, Richard Posner wrote for the New York Times that “The more news sources there are, the more intense the struggle for an audience. One tactic is to occupy an overlooked niche -- peeling away from the broad-based media, a segment of the consuming public whose interests were not catered to previously. That is the tactic that produces polarization.”

In the 1800s, the news industry helped Americans forge a sense of identity, and became a reliable and accessible source of news for a young country. However, early partisan splits laid the foundations for media bias, which would develop later on in the 1900s when radio and television became the dominant medium for news. More on that in Part 3!