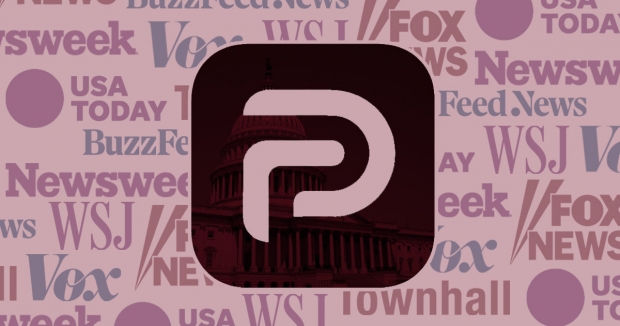 News outlets from left to right covered Big Tech’s ban of Parler very differently depending on their media bias rating.

The social media app popular among conservatives and Trump supporters was effectively banned from the web and mobile devices over the weekend. It stands accused of being used to help organize violence at the U.S. Capitol building last Wednesday; some say it definitely was, others say it definitely wasn’t.

So what’s the story — was this ban an unjust de-platforming, or was the app fueling violent extremism? Unsurprisingly, the angle depended on the outlet that published the story.

Some outlets on the left focused on Parler’s alleged role in enabling the violence, and on issues of extremism and fake news circulating on social media platforms. Some on the right framed the news more around the collective effort by large technology companies to outlaw the app, and concerns about free speech, censorship and cancel culture.

Many or all of these news stories were presented as “news reports” by the original media outlet, but most contain significant examples of subjective bias and skewed framing. And as you’re about to see, it only takes a few paragraphs from each to see the different biases at play. We bolded notable wording from each.

This USA TODAY report frames the application as biased toward conservatives, and says it was used to set up the Capitol breach:

This comes as Parler will likely be knocked offline for a week after Google and Apple removed it from their app stores. These moves along with Amazon's suspension will severely limit Parler's reach to its more than 10 million users after the app was among those used to organize the deadly riots at the U.S. Capitol.

This Vox article says that the app is a conservative platform for violence:

Not only have sites taken action against Trump and various Trump-related communities in the aftermath of Wednesday’s deadly attack on the US Capitol, but an entire social media platform favored by pro-Trump actors is set to go under for its role as a forum for violence and incitement.

Parler, a conservative social media platform that brands itself as a “free speech” alternative to sites like Twitter, was removed from the Google Play Store and the Apple App Store in quick succession this week. Amazon, which hosts the site, has since announced that it will no longer do so.

This Fox News story concentrates on an interview with Parler’s CEO John Matze, and gives no details about the app’s alleged ties to violence. It instead frames Big Tech’s moves as oppressive:

On Friday, Google dropped Parler's app from its Google Play Store. Apple followed suit Saturday by removing the app from the App store, while Amazon Web Services cut off Parler from its web hosting services.

While a non-partisan company, Parler has become a refuge for Trump supporters and others who have been either been kicked off Facebook and Twitter or have left those social networks in protest.

Unlike USA TODAY, this Wall Street Journal article doesn’t frame the app as having enabled violence, and instead paints Big Tech’s ban as hasty. It does label Parler a conservative, pro-Trump platform:

In a complaint filed Monday in Seattle federal court, Parler alleged that Amazon Web Services kicked the company off its cloud servers for political and anti-competitive reasons. The conservative social network founded in 2018 exploded in popularity among supporters of President Trump after the November U.S. election.

Similar to Vox, this Buzzfeed story says the app is favored by extremists and focuses on its alleged role in fueling last week’s violence:

Amazon notified Parler that it would be cutting off the social network favored by conservatives and extremists from its cloud hosting service Amazon Web Services, according to an email obtained by BuzzFeed News. The suspension, which will go into effect on Sunday just before midnight, means that Parler will be unable to operate and will go offline unless it can find another hosting service.

People on Parler used the social network to stoke fear, spread hate, and allegedly coordinate the insurrection at the Capitol building on Wednesday. The app has recently been overrun with death threats, celebrations of violence, and posts encouraging “Patriots” to march on Washington, DC, with weapons on Jan. 19, the day before the inauguration of President-elect Joe Biden.

This Townhall story takes a much more accusatory stance than the one from Fox News, outright alleging that multiple large tech companies are conspiring against conservatives:

Facebook and Twitter are purging conservative voices, and now Apple and Google are targeting an alternative app dedicated to free speech.

Twitter banned President Trump on Friday and prominent conservatives like Mark Levin have been encouraging followers to move to Parler, an app dedicated to protecting free speech. Now, cancel culture has enlisted Apple and Google in its fight to eradicate the left's opposition.

The New York Times reported that Apple and Google have removed the social networking app Parler from the companies' app stores, preventing countless conservatives from finding an alternative to Facebook and Twitter.

This Newsweek article mentions Parler’s conservative leanings, recent cases of online censorship, and last week’s violence, but doesn’t seem to frame one as more newsworthy or deserving of scrutiny:

Parler is a conservative-leaning social media site whose users mostly follow President Donald Trump, and it's a landing spot for many conservatives who have been banned by other social media outlets.

The move comes in the same five-day stretch that President Donald Trump was censored on social media giants Facebook, Instagram, Twitter and YouTube, and with Apple and Google already holding Parler's feet to the fire.

The recent bans, censors and suspensions follow last week's storming of the U.S. Capitol building by rioters and protesters who sought to interrupt a vote by Congress on the Electoral College's presidential results.

How do media outlets come away from the same events with such divergent interpretations?

Journalists and editors are people with regular human opinions and experiences. Those experiences influence how they approach their work. This can be a productive storytelling trait, but when not carefully kept in check, types of media bias like spin or slant can result.

A responsible news consumer acknowledges the journalist’s common humanity, but also the potential that media bias may occur. Then, they read, watch or listen with that in mind.

Choosing the most important information is a mandatory, subjective step in the reporting process. When in doubt, journalists should include as much as possible so readers can form a well-rounded opinion. In this case, a focus only on the Big Tech angle or only on the violence and misinformation angle isn't enough.

When it comes to coverage of hotly debated topics like free speech, online censorship and misinformation, know that you’ll usually have to look to multiple perspectives to see the whole story. Subjects that influence strong opinions in one direction or another — fake news, the First Amendment, political violence, cancel culture — can easily showcase media bias as well.

Henry A. Brechter is the Managing Editor of AllSides.com. He has a Center bias.