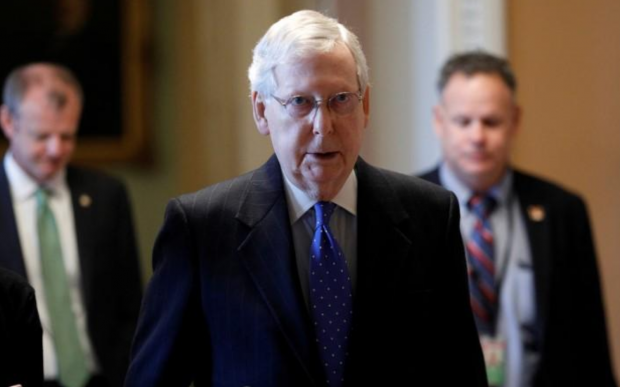 President Donald Trump's administration and Congress have been working to pass a series of stimulus packages and response measures to combat the effects of the COVID-19 coronavirus.

The packages — which are likely to cost over $1 trillion in total — would account for hundreds of billions of dollars worth of payments to the public, industry bailouts and aid for small businesses. Trump also enacted the Defense Production Act Wednesday, which allows the government to compel companies to build necessary supplies in support of national defense during a crisis.

Many reporting outlets have compared potential response efforts to measures taken during and after the 2008-09 economic recession. Some voices examined how the crisis response will impact Trump's re-election chances; others, especially on the right, zoomed in on several of Trump's political opponents who praised the response efforts, including Rep. Ilhan Omar (D-MN).

From the Blog: A deceptively edited video of Joe Biden got a retweet from President Trump, sparking debates about clickbait and misinformation. Meanwhile, sensationalism bias was visible far and wide after CNN commentator Andrew Gillum was found ‘inebriated’ and vomiting in a Miami hotel room last week.

"The Trump administration is seeking $250 billion in payments to Americans starting April 6, followed by another $250 billion cash payment round beginning May 18, according to the working draft of the plan obtained by Fox Business Network. The two payments to taxpayers would be identical and the amounts would vary by family income and size, according to the Treasury Department document on the "Stage Three" coronavirus proposal."

"The administration's working plan amounts to $1 trillion on paper. It would provide $50 billion for lending to the airline industry, which has drastically reduced flights due to travel bans and social distancing. The proposal would require "limits on increases in executive pay" until the loans are repaid. The proposal calls for $150 billion to "other severely distressed sectors of the U.S. economy" through secured lending or loan guarantees."

No bailout, no stimulus — give us reparations for government-mandated shutdowns

"Bailouts, in general, are neither good nor popular. The most recent legislation billed as a “stimulus” package was President Barack Obama’s 2009 raft of special interest giveaways and green energy boondoggles. It’s understandable, then, that a lot of conservatives are very wary of the proposed economic responses to the coronavirus crisis."

"Negotiations on the stimulus, including eventual talks with House Democrats, will likely extend into next week. Senate Majority Leader Mitch McConnell reportedly has given four special task forces until Thursday to come up with their pieces of the plan, covering health issues, tax policy, small businesses and major industries."

"The administration plan, which could still change as negotiations continue, includes $500 billion for two rounds of direct payments to taxpayers. The first round would start April 6, while the second would start May 18. Each round would be for the same amount, with the size of the payments based on income level and family size."

"Although a few lawmakers expressed doubts about the yawning sums under discussion, with one Republican warning this week against “shoveling money out of a helicopter,” the Senate’s majority Republicans said they hoped to have a proposal agreed on with President Donald Trump’s administration by sometime on Thursday."

"Congress already passed an $8.3 billion measure earlier this month to combat the spread of the new coronavirus and develop vaccines for the highly contagious disease that has infected almost 8,000 people in the United States and killed at least 145. The outbreak has paralyzed large sectors of the U.S. economy and led to fears of a global recession."

Stimulus check: What we know (and don't)

"The last time the federal government sent checks to Americans was in 2008, under President George W. Bush. The Economic Stimulus Act was signed into law on Feb. 13, 2008, and provided individual tax relief in the form of tax rebates – as much as $600 for individuals, $1,200 for married couples, and additional rebates for families with children. But the money didn't start going out until late April."

"Where is this money coming from? Taxes, in short. The bill signed by President Trump is known as "phase two." The stimulus checks, if considered and approved, would come as part of a trillion-dollar "phase three" package. Lawmakers are expected to start negotiations as soon as Wednesday night."

"As Congress tries to hash out a stimulus package potentially worth more than $1 trillion, Democrats are gearing up for a fight over whether direct payments to Americans struggling with the economic fallout of the coronavirus pandemic will be enough. Senate Minority Leader Chuck Schumer is among those arguing for expanded unemployment insurance as a source of relief. “A single $1,000 check would help someone pay their landlord in March but what happens after that?” the New York Democrat said on the chamber floor Wednesday."

"The debate over direct checks and unemployment insurance comes as Congress must weigh the balance of extreme measures in extraordinary times against instituting new policy that could set a precedent historically opposed by their respective parties and backers. Some Republicans have historically opposed more government intervention, like unemployment aid. A debate over paid leave similarly divided Congress in the second round of legislation that just passed."

Congress is gearing up to give corporations a ton of bailout cash. Progressives hope they learned lessons from the last time.

"For the last week, industry CEOs and their lobbying arms have been parading in and out of the Oval Office to express worry about what the sudden demand shock of the COVID-19 crisis has done to their bottom lines. Airports have asked for $10 billion, and public transportation officials estimate they’ll need $13 billion. The hotel industry seeks a whopping $150 billion, and the head of the US Travel Association thinks the travel industry as a whole needs $100 billion on top of that."

"If progressives can’t stop history from rhyming, they’re determined to stop it from repeating: If there will be money given to save industries, it will have strings attached. “People need to be prepared to learn the lessons of the past to resist these bailouts,” says Andy Green, the managing director at the left-leaning Center for American Progress, who worked as a staffer on the Senate Banking committee during the 2009 recovery."

Congress needs to spend $1 trillion on coronavirus stimulus. Here's how they should do it.

Jeff Spross in The Week

"Paid sick leave needs to be made available to all Americans — ideally permanently, but at a minimum for the duration of the crisis. Length, generosity, and eligibility for unemployment insurance needs to be expanded as well. Food assistance should be boosted. House Democrats have passed a bill that does all of that. But unfortunately the paid sick leave provision in particular is grossly inadequate, and the bill is being held up by GOP objections in the Senate."

"...the bigger we go now with stimulus, the more rapid the recovery will be once the infection crisis has passed. It would behoove Congress to schedule several months of the $1,000 cash payments now, just to guarantee the economy has plenty of cushion. We are far, far better off if we get a speedy economic bounce by going overboard with the national credit card than if we condemn ourselves to a repeat of the Great Recession's slow-grind recovery in the name of "fiscal responsibility.""

"The novel coronavirus is redefining Donald Trump’s presidency eight months before he stands for reelection as he wagers that the potentially largest rescue package in U.S. history could protect the American people from the economic carnage brought by the pandemic. Trump will be tested at the ballot box not only by his management of the public health crisis but also his ability to navigate what the president says will likely be a recession — a challenge that is reviving the decade-long debate over the use of public money to prop up private businesses."

"Trump’s hastily crafted stimulus, which has won early support from most Republican lawmakers, marks a sea change on the political right. The president and many of his conservative allies rose to power on the strength of a grass-roots movement forged in opposition to the bank bailouts during the 2008 financial crisis and President Obama’s subsequent economic stimulus package. Scrutiny of Trump’s plan continues to grow as some Republicans express unease about its scope and leading Democrats warn against federal giveaways to corporations without accountability measures that would ensure taxpayer money does not fund stock buybacks or executive pay."