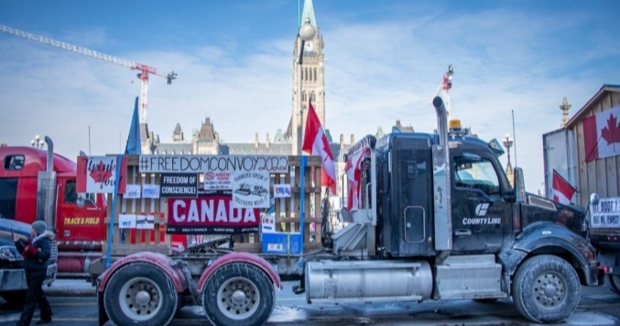 Protests in Canada against COVID-19 restrictions, led by a group of truckers called the Freedom Convoy, disturbed North America's economy this week while shining a light on government-enacted public health measures and prompting Canada's leader to declare a historic state of emergency.

Protesters have blocked key US-Canada bridges and staged disruptive demonstrations in Canada's capital of Ottawa. In response, Canadian Prime Minister Justin Trudeau invoked the Emergencies Act for the first time in Canada's history, giving the government and banks new temporary powers — including freezing bank accounts of those supporting the blockades. Weeks of protests in Canada have sparked similar trucker convoys in Europe and talks of like-minded demonstrations from U.S. truckers.

"The convoy is impossible to characterize because it has become a lightning rod for Canadians of every race and creed with unaddressed concerns. The only thing that ties them all together, if you talk to them, is their commitment to freedom."

"The Emergencies Act powers will 'strengthen' law enforcement’s ability to fine and imprison protesters, according to the prime minister. The act will be enforced most heavily in areas of 'critical infrastructure' such as airports and border crossings. Trudeau said that the act also ensures 'essential services' such as towing away trucks used to blockade roads and highways."

When ‘Freedom’ Means the Right to Destroy

"Any attempt to put a number on the economic costs of the blockade is tricky and speculative. However, it’s not hard to come up with numbers like $300 million or more per day; combine that with the disruption of Ottawa, and the “trucker” protests may already have inflicted a couple of billion dollars in economic damage."

"The protests...soon attracted a range of anti-government activists, far-right figures and opponents of pandemic restrictions more broadly But even as the vocal group of truckers, known as the “Freedom Convoy,” grabbed the world’s attention, many of Canada’s truck drivers were scrambling to distance themselves from the movement."

As vaccine protests gum up Ottawa, Canada wonders, ‘How did this happen?’

"The convoy, which arrived in Ottawa on Jan. 28, is composed, on the face of it, of people angry about vaccine mandates for cross-border trucking – the latest iteration in a series of demonstrations that started against masks, then lockdowns, then vaccines, and now vaccine policy. But it has attracted disparate groups...that were once siloed around their own interests and have now coalesced around pandemic frustration."

"The crossings — one of which leads to Pembina, North Dakota and the other to Sweet Grass, Montana — are the second- and third-busiest for freight trucks along the western border of the two countries."