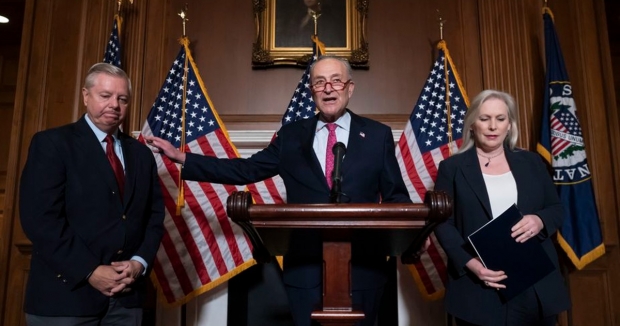 We spend a lot of time talking about the hyper-polarization and knee-jerk partisanship that is poisoning our politics – and for good reason. Both major parties have been struggling for years to keep their most fervent ideological zealots under control, with mixed success at best. Joe Biden has spent his first year in office trying to navigate between the demands of the progressive Democratic base and the realities of tiny congressional majorities. And traditional Republican conservatives capitulated so completely to Donald Trump’s populist armies that they are still trying to extricate themselves from his grip more than a year after he left office.

But even on this Balkanized political landscape, there is occasional evidence of bipartisan cooperation.

In the weeks after the 2020 election, Senators Joe Manchin (D-W.Va.) and Susan Collins (R-Maine), both routinely castigated by colleagues in their respective caucuses, led a small group of Senators in discussions to pass sweeping Covid relief. But the bill received little attention in the post-election frenzy surrounding certification of the electoral count and the chaos leading up to the January 6 Capitol riots. A similar group of Senators from both parties helped Biden secure further federal aid to combat the pandemic in the spring of 2021 and a massive infrastructure bill that fall. But both were quickly overshadowed by the White House’s failed efforts to pass Biden’s even more ambitious social spending and climate change legislation.

More recently, even while the headlines have been dominated by Democrats’ doomed fights for voting rights and filibuster reform, that same small band of Senators continues to collaborate on largely overlooked but important policy change. Last week, Congress renewed the Violence Against Women Act and finally ended the practice of forcing female employees to submit to closed-door arbitration to resolve sexual assault allegations in the workplace. Even before the voting reform bill was defeated, serious negotiations had begun on a long-overdue update to the Electoral Count Act that governs the rules for post-election vote counting. And there are serious bipartisan efforts underway to restrict lawmakers’ activity in the stock market, to make the U.S. more competitive with China, and to hold technology companies to higher standards for hosting inappropriate content. Every one of these bills represents significant progress in important policy areas, and every one of them has benefited from bipartisan cooperation.

The biggest potential challenge will come in the days ahead as the possibility of a Russian invasion of Ukraine looms on the horizon. Many of the same Republicans who vilified Biden for his administration’s ham-handed withdrawal from Afghanistan have offered measured praise for the way he has marshaled international support to stand against potential Russian aggression. While the resurgent isolationist wing of the GOP has harshly criticized the president, the support from so many Republicans undoubtedly strengthens Biden’s diplomatic hand on the international stage. Vladimir Putin clearly sees the deep divisions in American politics and society as a distraction that he has tried to exploit: even some measure of bipartisan unity makes that goal much harder more the Russian leader to achieve.

But let’s not get carried away. We are in the early stages of what promises to be an especially ugly midterm election season. And scorched-earth fights over Covid, inflation, crime, immigration, gun control and many other issues will only get nastier. Both parties’ strategists know that a non-presidential election year means lower voter turnout, which makes their reliance on their respective ideological bases  even heavier. Make no mistake: the most progressive of Democrats and the most conservative of Republicans will decide the outcome of November’s election and therefore control of Congress for the next two years. And most of them have no interest in bipartisan compromise whatsoever.

But even throughout what will assuredly be an uncommonly belligerent and combative election year, even as many of us bemoan the polarized and brutal nature of our politics, these examples remind us that there are still those in both parties who are still willing to reach across the battle lines to accomplish necessary policy goals. Those armistices are not nearly as frequent as in years past, but the fact that they still exist should give us some comfort until it comes time for us to mop the political blood off the floor after the next several months of vicious and unrelenting acrimony.