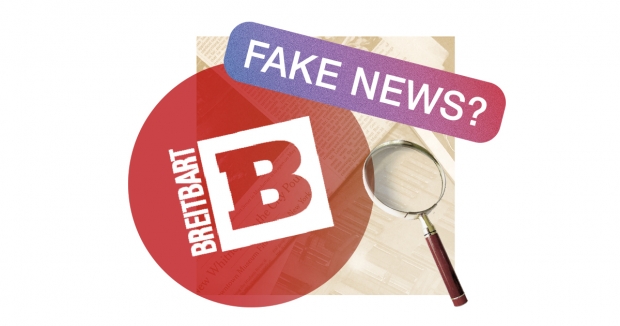 What constitutes propaganda, fake news, or misinformation is a major point of contention among the left and right. Media outlets that favor the political left or right may repeat claims or stories that suit their worldview and agenda. To some, this can constitute “fake news” — especially if they disagree with what is published.

Breitbart News Network is a politically conservative American news and opinion website that was founded by Andrew Breitbart in 2007. While Breitbart has a history of aggregating news articles from The Associated Press (Lean Left) and other outlets, it also publishes original news reports. A July 2021 AllSides Blind Bias Survey of Breitbart’s content found people across the political spectrum on average see Breitbart’s content as Right.

Often labeled as “far-right” and satirized by mainstream political media sources, particularly during the Trump administration, Breitbart News has been criticized by outlets mostly on the left that claim it publishes misinformation and misleading stories (New York Times, Lean Left), is “indulging conspiracies” (Washington Post, Lean Left) or running “incendiary headlines” (CNN, Left bias). The American Conservative (Right bias) once criticized Breitbart for promoting “extremism in the defense of Trump.” Twenty-five percent of respondents to a YouGov poll said they like Breitbart.

But does the outlet amount to fake news?

There is broad disagreement as to what ought to be referred to as “fake news” in general.

Today, many left-leaning mainstream media outlets, including CNN, MSNBC, and The New York Times, have begun to more often refer to “misinformation” — fictional, made-up information or false narratives. In the past, when outlets on the left referred to “fake news,” it was largely referencing purely false or made-up information.

Related: What is Fake News?

However, media outlets and people on the right, as well as some on the progressive left, have been known to use a broader definition of “fake news” to describe media coverage that may include some factual information but is overly biased, deceptive, or manipulative. Some argue that the media elite employ bias, misrepresent facts, push false narratives, fail to do good-faith research, and/or lack credibility. Any combination of these, in the eyes of many on the right and some people elsewhere across the political spectrum, amounts to “fake news.” For those using this definition, they may see Breitbart as fake news.

Meanwhile, people from all sides of the political spectrum — left and right — have noted that the term “fake news” can be used to discredit anyone or anything someone disagrees with or doesn’t like.

An entire news outlet isn’t “fake news” because it posted one incorrect or false story. Mistakes do happen. Often, good journalists who make a mistake or accidentally publish false information issue apologies and corrections, and try to rectify the situation.

However, there are some examples of Breitbart publishing what some may say amounts to “fake news.”

Breitbart published numerous articles on the topic of voter fraud in the wake of the 2020 presidential election, and one was found to contain misleading slant about voter fraud in its headline.

An August 2020 Breitbart news article titled “Michigan Rejects 846 Mailed Ballots ‘Because the Voter Was Dead’” reported on data from a press release from Michigan’s Secretary of State Jocelyn Benson. While not technically inaccurate, the headline didn’t provide needed context, giving the impression that hundreds of mail-in ballots were illegitimately cast when these ballots were discarded for another purpose.

Several left-and center-rated outlets fact-checked Breitbart’s article and concluded that its headline was “misleading” and “alarmist,” as the 846 votes in question were rejected because they were cast by individuals who were alive when they submitted them, but who died before Election Day — which Poynter pointed out “happened in past years, too, including in 2016.” CNN Fact Check (Left bias) concluded that this is an example of Michigan’s voter verification “working the way it’s supposed to.”

The article was shared by Jason Miller, Donald Trump Jr. and other prominent conservative voices on Twitter — seemingly to accentuate former President Donald Trump’s claim that voting by mail is rife with fraud.

Trump’s vocal concern over ballot harvesting and voter fraud were the foundational pillars that motivated his claim that the 2020 presidential election was stolen from him. Since then, many voters, Republican politicians and a Supreme Court justice have given creedence to Trump’s unfounded theory that voter fraud played a role in his defeat.

A study released in 2021 by the Center for Countering Digital Hate (Lean Left) argued that Breitbart was the leading source of what they consider to be climate change misinformation. The organization referred to Breitbart as “the disinformation site once run by Steve Bannon,” and argued Breitbart was responsible for 17.13% of “interactions with climate denial” on Facebook. The study assessed “a sample of 6,983 climate denial articles published between 12 October 2020 and 11 October 2021,” which included “articles containing phrases associated with climate denial, such as ‘climate fraud’.”

The study’s authors claimed that Breitbart “regularly publishes climate change denial,” writing, “US contributor John Nolte and Breitbart London’s executive editor James Delingpole both [have] repeatedly referred to climate change as a “hoax” pushed by so-called “climate alarmists”,” and linked to four content examples. The study authors also pointed to an article from March 2021 that they said “promotes a conspiracy theory” about “the leftist connections between ostensibly public-health-related lockdown decrees, the Great Reset and ‘climate change’ advocacy.”

During the worldwide heatwaves in the summer of 2022, Breitbart regularly published articles that dismissed assertions from “climate alarmists” claiming that rising global temperatures are linked to human activity. The outlet also published reports that framed climate protesters in a negative light, such as one highlighting climate activists blocking traffic. Another report blamed the “green crazies” and their policies to combat climate change for partially causing “ever-increasing inflation.”

Those who believe climate change is a serious threat influenced by human action would likely see Breitbart’s coverage of this issue as misleading or fake news; however, those who are skeptical of such claims or who agree with Breitbart's opinion columnists likely disagree that such content constitutes misinformation or falsehood.

Being ‘Duped’ by Misleading Information

The staff at Snopes (Lean Left bias) asserted that Breitbart was “duped by fake news” when they cited a false claim to back up the narrative that protesters were paid to attend Trump rallies.

Snopes claimed that Breitbart, which they labeled as “notoriously unreliable,” failed to “demonstrate that what they were reporting was actually true.” The right-rated outlet linked to a Craigslist ad that allegedly offered “paid positions to protest Trump rally” and falsely attributed this claim to a report published on a visibly fake website that was posing as ABC News to “lure in gullible readers.”

The Snopes fact-check also linked to another instance where Breitbart falsely cited a satirical piece that joked the California state flag was supposed to be a pear, not a bear.

Some right-rated outlets during the COVID-19 pandemic grew skeptical of the data being released by public health officials — and at times, their skepticism proved warranted. However, one report was seen by some as spreading misinformation.

In July 2020, Breitbart live-streamed a COVID-19 press conference in D.C. held by America’s Frontline Doctors, a group founded by Dr. Simone Gold. The event was sponsored by a group called Tea Party Patriots. The doctors claimed there was a “massive disinformation campaign” around COVID, and claimed that hydroxychloroquine is an effective treatment for the virus. Breitbart’s video quickly garnished millions of views across social media platforms before being removed for purportedly spreading misinformation.

Early in the pandemic, the FDA issued emergency use authorization (EUA) for hydroxychloroquine for use in certain COVID-19 patients but revoked that authorization in June 2020.  Researchers from the National Institutes of Health and many other health research organizations and resources concluded later that year that hydroxychloroquine provided “no benefit” to adults hospitalized with COVID-19, citing a number of potential risks such as “serious heart rhythm problems.” Similarly, Penn Medicine News found that the drug was “no more effective than a placebo” in preventing COVID-19.

Some who doubt the legitimacy of leading health authorities, especially when it comes to anything related to COVID-19, are likely skeptical of these conclusions. But for many others, those conclusions would be more than enough reason to deem Breitbart “fake news” for streaming the press conference.

What Does Fake News Mean to You?

So, is Breitbart really “fake news”?

While the majority of its content is presented as fact-based reporting, Breitbart also publishes a lot of content that constitutes opinion and commentary. Since individual perspectives are outside the realm of facts, they cannot technically be fact-checked. At times like those detailed here, some of Breitbart’s reporting has been called into question.

While some of the aforementioned cases of Breitbart publishing false or unproven claims could seem alarming, the majority of its news content is based on fact. Yet for some people, only a few instances of false information or the publishing of viewpoints they disagree with are enough to qualify Breitbart and others as “fake news.”

In our polarized democracy, Americans hold differing opinions about what really constitutes fake news. See more about that from our Red Blue Translator.

Editor's Note: An earlier version of this article mistakenly implied that all Breitbart's coverage of voter fraud in 2020 amounted to misinformation.

Antonio Ferme is the Weekend News Editor at AllSides. He has a Center bias.