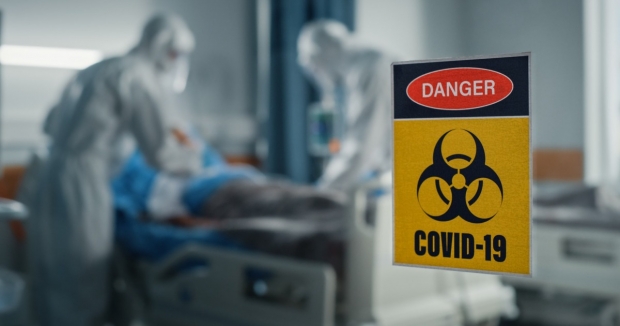 Hospitals in states such as New York and Massachusetts recently began distinguishing between patients they admitted primarily for COVID-19 and patients who were being treated for something else before incidentally testing positive for the virus.

This is the first time that states have counted and reported these numbers as separate groups, resulting in criticism and confusion from news outlets and other voices across the spectrum.

At the epicenter of the conversation around incidental COVID hospitalizations are the reported rise of children being hospitalized with COVID-19.

Infectious disease expert Anthony Fauci recently explained how if a child is admitted to a hospital, they automatically get tested for COVID-19 and are "counted as a COVID-hospitalized individual," which he said leads to "overcounting." He also urged Americans in another interview to "focus on the hospitalizations" instead of case counts as infections become less severe.

CDC Director Dr. Rochelle Walensky told Fox News (Right bias) that there is no “increased severity in this age demographic” and that “the vast majority of children who are in the hospital are unvaccinated.”

Walensky’s remarks line up with what many public health professionals have been attributing the rise of pediatric hospitalizations to.

“Younger children do not yet qualify for vaccination, and only those age 16 and older qualify for booster shots, which offer the most effective shield against infection and hospitalization,” Dr. David Rubin, a researcher at Children’s Hospital of Philadelphia, told The New York Times (Lean Left bias).

The confusion has led to the spread of misinformation. During Supreme Court hearings on vaccine mandates, Justice Sonia Sotomayor falsely claimed that there are currently "over 100,000 children" with COVID-19 that are "in serious condition and many on ventilators" — adding to the controversy around pediatric hospitalization rates.

Walensky also told Fox News that fewer than 3,500 children are in U.S. hospitals with COVID-19 and that "up to 40% of the patients," including adults, who test positive are being hospitalized for different reasons and subsequently catching COVID-19 or testing positive incidentally.

Reactions From The Left

While left- and center-rated outlets have recently highlighted more COVID-related skepticism than at previous points during the pandemic, many still promote a narrative that the virus is a public health emergency.

While most left-rated outlets acknowledged that children infected with the virus are at much less risk of becoming severely ill than adults, they emphasized a number of concerns that were downplayed by the right.

One notable example is an analysis piece published by The Atlantic (Lean Left bias) that explained why incidental hospitalization numbers “are more complicated than they first seem.”

In certain cases, the article states, “COVID might not be listed as a reason for admission, but the patient wouldn’t have been admitted were it not for COVID.” They cited some cases where people could have “chronic conditions only because of an earlier COVID infection,” which could increase the risk of “long-term complications” such as diabetes.

“These patients whose problems were exacerbated by COVID are often misleadingly bundled together with the smaller group whose medical problems are truly unrelated to COVID.”

“In fairness,” they continued, “there’s no easy way to tell.” The article emphasized how there is still a lot of uncertainty when it comes to this virus and that “COVID data have always been mushy, lagging, and incomplete.”

In terms of pediatric hospitalizations, NBC News (Lean Left bias) accentuated concerns from doctors who say a “worrisome number” of children are “experiencing severe complications of the coronavirus.”

Washington Post (Lean Left bias) said that the Omicron variant “threatens to obliterate” the current record of highest COVID-19 hospitalizations. They cited infectious-disease modelers who predicted the total number of COVID-related hospitalizations to be “in the 275,000 to 300,000 range when the peak is reached, probably later this month.” One official even predicted that the number could be as high as “300,000 to 350,000” by Jan. 27.

Many reports from left-rated sources, such as from CNN (Left bias) and The Guardian (Lean Left), do not note the recent revelation that many COVID-19 hospitalization counts might be skewed or misleading.

Reactions From The Right and Center

National Review (Right bias) highlighted data that found 43 percent of patients in New York hospitalized with COVID-19 were admitted for “reasons believed to be unrelated to the coronavirus.” The outlet emphasized how the CDC doesn’t “presently make that distinction” between primary and incidental cases, and then accentuated how the organization “reports a 41.1 percent increase in its seven-day average of hospitalizations.”

Daily Wire (Right bias) said that these “milder” Omicron cases are resulting in “patients concerned about COVID-19 are heading to the hospital emergency room, only to be shortly discharged due to non-severe cases.” They also backed up the opinion that the Biden administration and public health officials “are more motivated by the 2022 midterms” than “following the science.”

Breitbart News (Right bias) emphasized how U.S. hospitalizations have recently broken records despite Biden’s pledge “to ‘shut down’ the coronavirus when campaigning in 2020.”

Fortune (Center bias) highlighted voices from public health experts who suggest it’s time to move away from “the idea that we will vanquish the virus completely, and instead learn to live with it as an endemic disease like the flu.”

Right-rated voices were also more likely to criticize those on the left for being “two years too late” when it comes to acknowledging “misleading” COVID-19 statistics.

"So the hospitals are still stretched thin because of this, so I am not trying to take away from that, but if 40% in some hospitals, 40% of the people who have COVID don't necessarily have problematic COVID, they're there because they got in a car accident. They're there because, you know, they bumped their head and they're being included as in the hospital with COVID.”

This is a clear example of Bias by Omission, and although this may seem slight, it could change the reader’s perception of what Tapper said. This type of bias has been found in both left-and right-rated outlets.

Most outlets across the spectrum, especially those rated by AllSides as on the right, seem to agree that the CDC’s recent actions are "a communications disaster." In order to reinstate trust with other Americans, they argue that Walensky and other members of the public health agency need to avoid issuing recommendations that "confuse the public."

And as many outlets have suggested, the number of COVID-19 hospitalizations is likely a bit skewed. And since many hospitals get more federal funding if they have more COVID-19 patients, the number of hospitalized people and the process of calculating it warrants close scrutiny.

Statistics and sensationalism aside, some hospitals are reportedly becoming increasingly crowded and running low on bed space. This affects the health and safety of all patients — whether they have COVID or not. It’s a bipartisan health concern that affects Democrats and Republicans alike.

It’s easier to see a clearer picture when you’re not caught inside a filter bubble. Use our balanced newsfeed to get multiple perspectives, and get the tools to decide for yourself what you think about the issues.