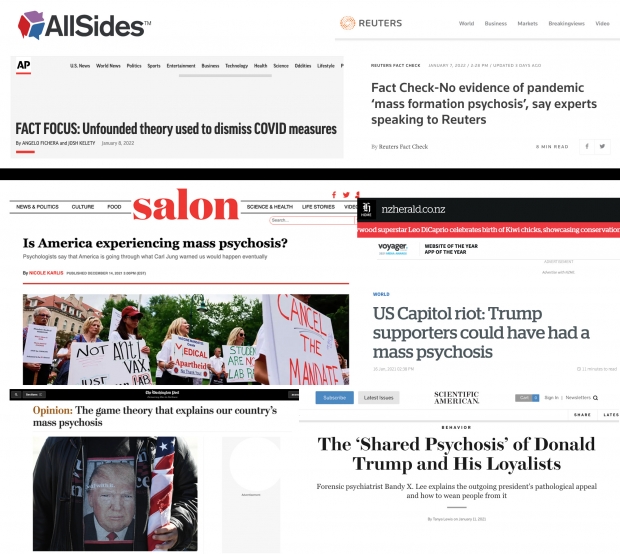 Two recent fact checks by the Associated Press Fact Check (Lean Left) and Reuters Fact Check (Center) recently drew a lot of attention on Twitter. The outlets quoted psychologists who said “mass formation psychosis,” a concept that rose to prominence when cited by Dr. Robert Malone in a recent interview with podcaster Joe Rogan, is an unfounded theory. The fact checks led to charges of media bias.

The AP and Reuters fact checks commit a few types of media bias: bias by omission (excluding alternative perspectives) and slant, a closely related type of media bias in which information is cherry-picked to support one side. In addition, AP and Reuters do what we’ve seen many fact checkers do in the past — attempt to fact-check something that is largely subjective in nature or lacks clear evidence for a factual finding.

AP, Reuters Focus Only On Voices Who Agree

Reuters’ piece quotes some of the same psychologists — Durry, Van Bavel, and Reicher. (AP’s piece was posted one day after Reuters’.)

According to AP, Van Bavel reportedly “said he had never encountered the phrase ‘mass formation psychosis’ in his years of research, nor could he find it in any peer-reviewed literature”; Drury reportedly said the concept “resembled discredited concepts, such as ‘mob mentality’ and ‘group mind,’” ideas that suggest “when people form part of a psychological crowd they lose their identities and their self-control; they become suggestible, and primitive instinctive impulses predominate.”

Both AP and Reuters note that the term also does not appear in the American Psychological Association’s Dictionary of Psychology.

A common way fact checkers show bias is when they “fact check” things that are largely subjective in nature — things that fall in the realm of opinion or theory, rather than that which can be objectively measured or observed empirically.

Some psychologists support the idea that groups of people can fall under a mass delusion, and that mob mentality is real, but AP and Reuters didn’t include their voices. When a journalist presents all sides of an issue and allows the reader to decide for themselves, it builds trust — when they don’t, suspicion may arise.

It’s largely a matter of opinion as to whether or not people are (or can) undergo some sort of mass delusion, and the nature of psychosis itself can be fuzzy — it’s something that is hard to study empirically or objectively prove through observation. That perhaps makes this concept ill-suited for a definitive “fact check.”

AP states that it did reach out to Desmet, a Professor of Clinical Psychology at Ghent University in Belgium who speaks about “mass formation psychosis”; he reportedly did not return AP’s requests for comment.

But Desmet has appeared in YouTube videos giving interviews about the idea. If AP and Reuters wanted to give the concept an honest exploration, they could have added balance to their pieces by including quotes from someone on the other side — Desmet — by pulling from his publicly available interviews. Of course, if they had done this, they would have had to reframe their piece, and not pass them off as fact checks, but rather pose a question or exploration that allows the reader to decide for themselves.

AP also could have quoted others who have written on the topic of the dark side of mass psychology, such as Swiss psychiatrist Carl Jung, arguably one of the world’s most famous psychiatrists and psychoanalysts.

He wrote at length about the dangers of a “psychic epidemic” in his book The Symbolic Life. A psychic epidemic, he writes, is when people get caught up in delusion, fear, anger or anxiety, and an entire population becomes mentally ill. Jung, like Desmet, argued the rise of totalitarian regimes are the result of such mass psychological phenomenon.

Another psychiatrist, Joost A. M. Meerloo, M.D., also wrote in his book The Rape of the Mind about mass psychology that leads to totalitarianism; Meerloo was a member of the faculty at Columbia University and Associate Professor of Psychiatry at the New York School of Psychiatry.

“. . .the totalitarian systems of the 20th century represent a kind of collective psychosis,” Meerloo wrote. “Whether gradually or suddenly, reason and common human decency are no longer possible in such a system: there is only a pervasive atmosphere of terror, and a projection of “the enemy,” imagined to be “in our midst.” Thus society turns on itself, urged on by the ruling authorities.”

In short, while the specific phrase “mass formation psychosis” may be a neologism, psychologists have long explored and formed theories around the concept of group psychology and its potential negative outcomes. Fact check pieces that attempt to debunk this ignore the other side.

Controversy Over Fact-Checking to Support a Political Agenda

Fact checking has risen in prominence in journalism over the last few years. But some fact checks are crafted to support political agendas, rather than to give balanced depictions of the truth.

In order to lend more transparency to the political leanings of fact checkers, AllSides developed our Fact Check Bias Chart, which reveals the bias of top fact checkers.

Dr. Malone’s comments describing “mass formation psychosis” represented an opinion, and had a political angle that may have inspired fact checkers to discredit his opinion. You can read his full comments here; he stated in part:

How is a third of the population basically being hypnotized, and totally wrapped up in whatever the mainstream media and Dr. Fauci feeds them and whatever CNN tells them is true?

The other day I was reading the New York Times about Omicron and pediatrics and I saw this headline from an epidemiologist: How to Think About Omicron’s Risk for Children.

It was blatantly saying this is how you should think, we're going to tell you how to think. People have to get that in their heads. That's the world we're in right now.

What Mattias Desmet has shared with us is another ["a-ha" moment]. This comes from European intellectual inquiry into what the heck happened in Germany in the 1930s... How did that happen?

The answer is mass formation psychosis.

When you have a society that has become decoupled from each other and has free-floating anxiety in the sense that things don’t make sense, we can’t understand it. And then their attention gets focused by a leader or series of events on one small point, just like hypnosis. They literally become hypnotized and can be led anywhere.

And one of the aspects of that phenomenon is the people they identify as their leaders, who come in and recognize their pain and say "I alone can fix this for you," they will follow that person through hell...

Anybody who questions that narrative is immediately attacked. This is what has happened. We have all those conditions.

At least one journalist celebrated AP’s fact-check of Malone as a “good and sober rundown.” But some others were much more critical.

One psychology professor, Geoffrey Miller of the University of New Mexico, argued on Twitter that the AP Fact Check piece is indicative of hypocrisy, as media outlets of a certain political persuasion say mass psychosis doesn’t exist when the concept is used against causes they support, but say it does exist when it comes to their political opponents, who they believe are falling under the spell of misinformation, conformity, social contagion or group polarization.

AllSides did find some media outlets have run stories claiming Trump supporters, QAnon supporters, and those who stormed the Capitol on Jan. 6 are/were suffering from mass psychosis (though not AP or Reuters, from what AllSides could find — email us if we missed it).

Below are headlines we found that linked political groups to mass psychosis. Should AP and Reuters fact check these articles and reject their claims of mass psychosis? 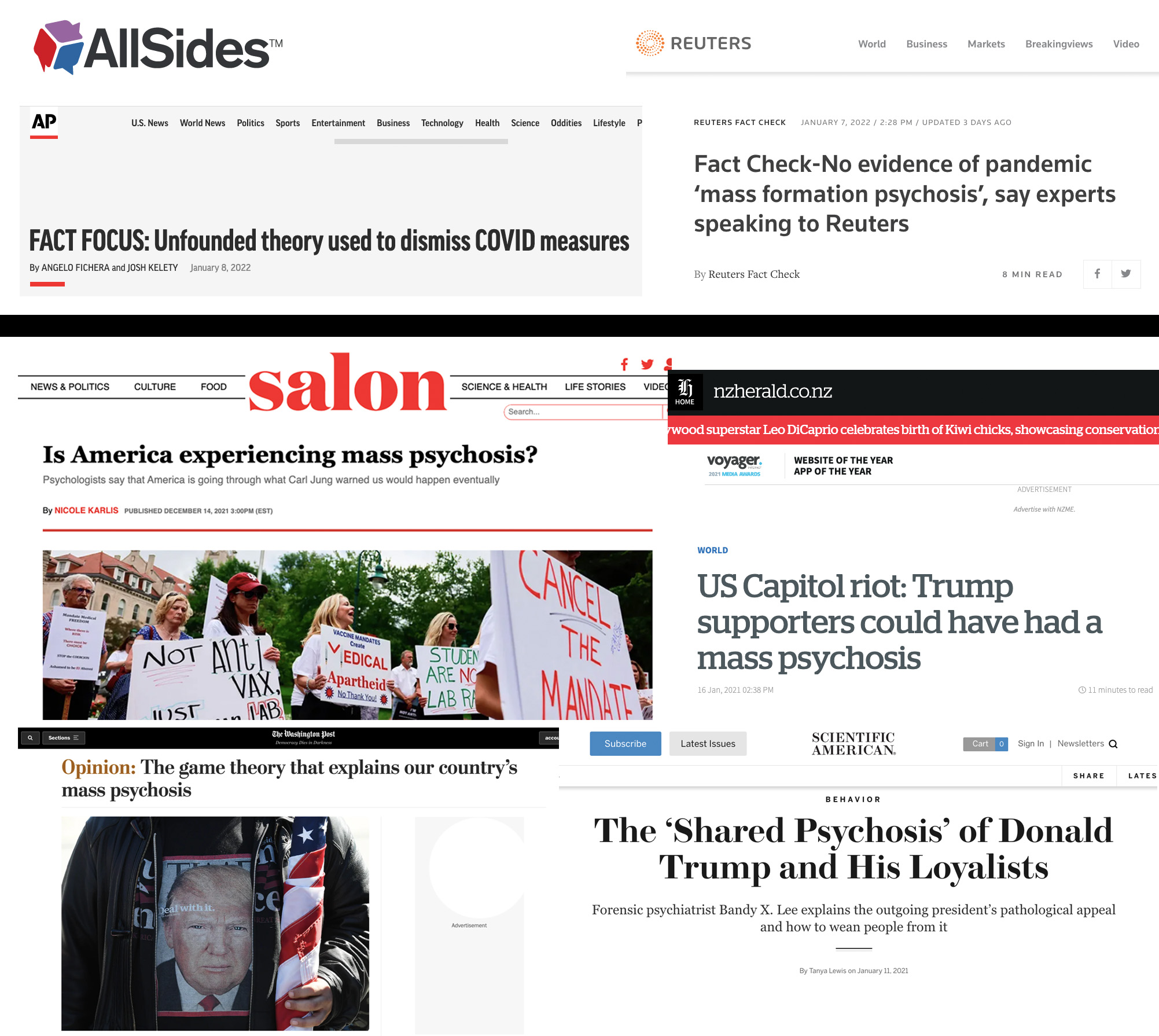 The Salon article, for its part, quotes Katharine Bainbridge, a Jungian analyst, who notes how America’s political polarization means that both sides think the other side is suffering from mass delusion.

“It's complicated,” she said. “From the left's point of view, people that aren't being vaccinated or think the election was rigged are psychotic, right? If you're on the right, you think the left is psychotic and has lost its mind in identity politics. Both sides look at each other and say, 'you've lost your mind.'""

With political polarization at such highs, news organizations that refuse to provide balanced descriptions of both sides will continue to inspire suspicion. AP and Reuters would have garnered more confidence if they had included voices that support the concept of mass psychosis, or those who have theorized about mass psychology, right next to those who don’t, so that the reader could weigh both sides and decide for themselves.

It’s okay to have a point of view, but one-sided media bias means other views are hidden or distorted. This makes us vulnerable to manipulation. Our Fact Check Bias Chart, 12 Types of Media Bias resource, and balanced newsfeed can help you to make sense of the information you’re receiving. We’ll never tell you what to think — only give you the tools to decide for yourself.