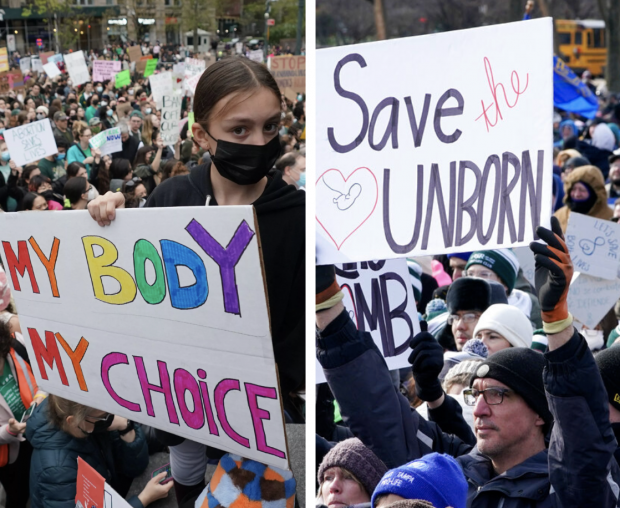 The way that the media and politicians frame the abortion debate makes it seem like Americans share little common ground on both a moral and constitutional level — but data has rebuked this idea.

The abortion debate has been at the forefront of national media and politics since last Friday when the Supreme Court overturned the 1973 Roe v. Wade ruling, which decriminalized abortion nationwide. The controversial decision grants individual states the power to institute their own abortion restrictions.

The “two sides” of the debate are well-known to most — “pro-choice” Americans generally oppose government restrictions on women’s access to abortions, while most “pro-life” Americans are advocates of tighter abortion restrictions.

Related: AllStances™: Should Abortions Be Legal or Banned?

One report from Pew Research Center (Center bias), titled “America’s Abortion Quandary,” noted that, “relatively few Americans on either side of the debate take an absolutist view on the legality of abortion – either supporting or opposing it at all times, regardless of circumstances.”

Here’s how Pew framed their own research in an email sent out on Sunday morning (emphasis ours):

“In a major study conducted in March, a majority of Americans said abortion should be legal in all or most cases, but many were open to restrictions. Many opponents of legal abortion, in turn, said the procedure should be legal under some circumstances.”

Pew’s statement is far from false, but it might be a bit misleading. Let’s review the data:

Maybe the phrase “many” could’ve been swapped with “the majority of” or “most,” but the larger takeaway from this data should be that the vast majority of people — both pro-choice and pro-life Americans — are not absolutists on abortion issues.

Related: Here’s Where Democrats and Republicans Agree on Abortion

Even Pew Research, with their extraordinary focus on data and research, seemed to underreport our nation's common ground in the way they described it.

No one is perfect — including us. Our team is a huge proponent of the work that Pew Research has produced over the years, but this example reveals how easy it is to focus on differences instead of common ground.

Comparatively, Axios (Center bias) highlighted a recent CBS News/YouGov reaction poll, the headline read that a "majority of Americans disapprove of overturning Roe v. Wade." The number is 59%, but they didn't include that. Instead, the outlet highlighted the disapproval number of women — which is notably higher at 67%.

Media coverage tends to focus on the extremes of the abortion issue, such as where abortion is banned entirely or when the polarization between pro-choice and pro-life people turns violent. However, the Pew Research data reveals that over 70% of Americans are not on the extremes. In wake of the initial Supreme Court leak and eventual decision to overturn Roe v Wade, this is the underreported story.

As our nation grows more divided, our team here at AllSides believes that it’s important to highlight the common ground on a contested issue — especially when the media underplays it.

It’s easier to see a clearer picture of Americans’ views on abortion when you’re not caught inside a filter bubble. Use our balanced newsfeed to get multiple perspectives, and get the tools to decide for yourself what you think about the issues.

To keep up to date with the latest news, follow AllSides’ 2022 Elections page and daily Headline Roundups.