The States Poised to Restrict or Outlaw Abortion

Now that the Supreme Court has overturned Roe v. Wade, what's next for abortion in the United States?

In 13 states, such as Texas, Utah and Louisiana, abortion is now illegal or will become illegal within weeks as "trigger laws," which revive previous abortion bans, take effect. 16 states and Washington, D.C. have laws in place protecting abortion access. Other states, such as Indiana, Ohio and Georgia, have unenforced abortion bans that state legislatures could now revive. In some of these states, like Pennsylvania and Michigan, pro-choice Democratic governors are pitted against state legislatures controlled by pro-life Republicans.

President Joe Biden said Friday that "it's a sad day for the court and for the country" and that "I'll do all in my power to protect a woman's right in states where they will face the consequences of today's decision." He also again asked Congress to pass legislation codifying Roe v. Wade.

The decision's implications have been covered widely across the media spectrum, especially by left- and center-rated sources. Details in news coverage often reflect fundamental differences in abortion views. A report from Fox News focused on how the decision "allows state legislatures to pass laws banning abortions prior to fetal viability." Conversely, a report from HuffPost focused on the court "has struck down the reproductive rights granted in Roe" and how "abortion will now be heavily restricted or completely banned in about half of the U.S.’s 50 states." 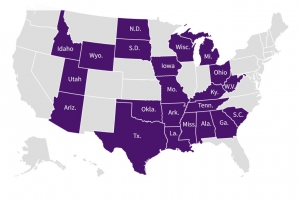 On June 24, the U.S. Supreme Court, in a 6-3 decision, overturned the landmark 1973 Roe v. Wade ruling that recognized a woman's constitutional right to an abortion and legalized it nationwide. These 22 states are now primed to outlaw the procedure under existing laws or constitutional amendments that heavily restrict access. Some bans will take effect immediately and others in the weeks and months ahead.

South Dakota, Louisiana and Kentucky have “trigger” bans in place to immediately outlaw abortion once Roe is overturned. Penalties for people who provide or attempt to provide... 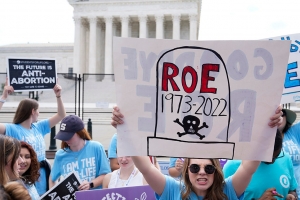 A leaked February draft opinion indicated that the court may move in that direction. The final opinion was released Friday, June 24.

Overturning Roe v. Wade, the landmark ruling that limited government restrictions on abortion, will allow states to change access to abortion, allowing state legislatures to pass laws banning abortions prior to fetal viability. Blue states, however, are looking to expand access to abortion. 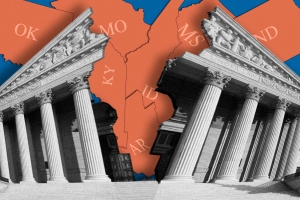 The Supreme Court overturned Roe v. Wade in a 5-1-3 decision in the case of Dobbs v. Jackson Women’s Health Organization on Friday. Abortion will now be heavily restricted or completely banned in about half of the U.S.’s 50 states.

But changes to legal access to abortion, while radical and widespread, will happen unevenly under a patchwork of varying state laws. Overturning Roe just means states are free to decide how to, or if, to allow access to abortion services. Sixteen states will immediately, or in short order, ban abortions in...