President Donald Trump heads to Kenosha, Wisconsin Tuesday to highlight a law and order theme in a city that has experienced protests and violence after the shooting of a black man by a white police officer. The trip is in defiance of Wisconsin Gov. Tony Evers, who asked Trump to stay away to calm the tensions. Democratic presidential nominee and former Vice President Joe Biden has also condemned Trump for defending a young Trump supporter who allegedly fatally shot two protesters in Kenosha last week. 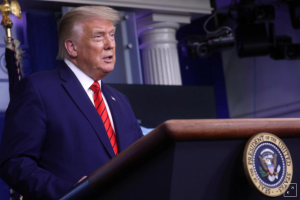 Despite entreaties to stay away, President Donald Trump heads to Kenosha, Wisconsin on Tuesday to highlight his “law and order” campaign theme in a city upended by protests after the shooting of a Black man by a white police officer.

The Republican president, who is running for re-election against Democratic presidential nominee Joe Biden, has seen his polling gap with the former vice president narrow amid ongoing protests over racial injustice and resulting violence. 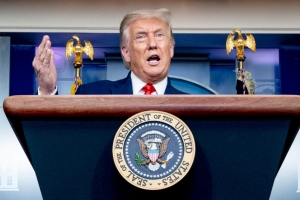 He is expected to meet with law enforcement and tour damaged businesses.

President Donald Trump was headed to Kenosha, Wisconsin, Tuesday after drawing a comparison between police officers who shoot people in the back to golfers who “choke” and miss a three-foot putt.

The president’s comments come ahead of a planned trip to Kenosha a community rocked by protests and unrest after a... 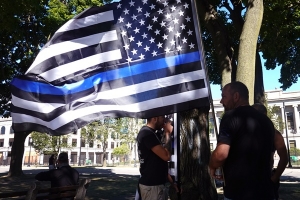 President Donald Trump is heading to Kenosha, Wisconsin, to talk to the police and responders helping curb and clean up after the violent protests to "increase enthusiasm" and "love and respect for our country."

"That's why I am going, because they did a fantastic job," Trump told reporters Monday during the daily press briefing. "As soon as a I called and told them, 'let's go,' the whole problem stopped.

Trump also offered an explanation for why he had no plans to speak with Jacob...