Two police officers involved in the shooting of Breonna Taylor will not face charges, while one officer was charged with three counts of "wanton endangerment," a Louisville grand jury found Wednesday. Taylor was killed March 13 after police entered her home with a "no-knock" warrant searching for illegal drugs. Two recently conducted independent investigations concluded that officers made their presence known before entering. A former detective who was fired in June was charged with wanton endangerment of Taylor's neighbors. The two other officers were not charged because they were reportedly justified under Kentucky law in returning fire after Taylor’s boyfriend shot an officer. The announcement comes after a "state of emergency" was declared for Louisville police in anticipation of the case results. People gathered in downtown Louisville Wednesday to protest the case results.

Coverage from all sides of the political spectrum focused on the details of the shooting and of the grand jury's charges. Some coverage from right-rated outlets emphasized the jury's justification of the officers, as well as the subsequent protests in Louisville.

From the Right
3852
Criminal Justice
Louisville: Protests Break Out, Gear Unloaded from U-Haul After No Murder Charges in Breonna Taylor Case
Breitbart News 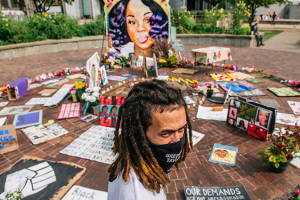 Protesters took to the streets of Louisville Wednesday after a Kentucky grand jury did not bring murder charges against any of the officers involved in the shooting death of Breonna Taylor. A pair of videos shared to social media shows protesters unloaded shields and signs from a U-Haul truck. It is unclear who rented the truck. One shield read “BLM” in red, while another one had the phrase, “Protect Black Women.”

Two white policemen who fired into the apartment of Breonna Taylor, a Black medical worker, will not be prosecuted for her death because their use of force was justified, but a third was charged with endangering her neighbors, Kentucky’s attorney general said on Wednesday. Attorney General Daniel Cameron announced the Louisville grand jury’s decision at a news conference as protesters against racial injustice and police brutality massed in the streets of Kentucky’s largest city.

Former Detective Brett Hankison was indicted on three counts of wanton endangerment in the first degree,...

A grand jury in Jefferson County, Ky., has indicted a former Louisville police detective on three charges of wanton endangerment in the first degree in the March 13 shooting death of 26-year-old Breonna Taylor. Brett Hankison, one of three officers involved, was fired by the department in June, with a termination letter saying he “wantonly and blindly” shot 10 times into Taylor’s apartment.

Purdue Pharma, the drugmaker blamed for helping to unleash America's staggering opioid crisis, agreed to plead guilty to criminal charges as part of an $8...

Pressure builds for US police to change military mindset
ANALYSIS

On a September morning in 2008, Brian Wood made a distraught retreat from a heated dispute with his wife and sat down with a gun in his truck in the driveway...

A Look at America's Most Corrupt Police

If there's a worst-case scenario for police corruption, it would look a lot like the tale told in I Got a Monster: The Rise and Fall of America's Most Corrupt...