Fact Checking The 2020 State Of The Union Address

Media from the right, left and center check the facts on claims President Trump made regarding jobs, wealth and wages during Tuesday night's State of the Union Address. 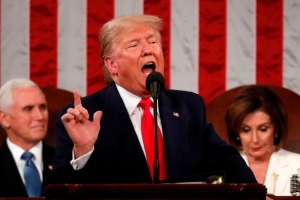 To hear President Trump tell it in his State of the Union speech Tuesday, he rescued a declining, hollowed-out economy from ruin to create the greatest era of prosperity in U.S. history.

Trump has presided over a solid economy since taking office in 2017 but mischaracterized the state of the economy under President Obama and overstated his accomplishments. In truth, the economy has mounted a steady recovery since the Great Recession of 2007-09, marking the longest expansion in American history.

“You have seen a continuation of the trend,” says Elise...

Read full story
Some content from this outlet may be limited or behind a paywall.
See full media bias rating for USA TODAY
From the Left
320
White House
Fact-checking President Trump’s 2020 State of the Union address
Washington Post

President Trump’s State of the Union speech once again was chock-full of stretched facts and dubious figures. Many of these claims have been fact-checked repeatedly, yet the president persists in using them. Here, in the order in which he made them, are 31 statements by the president.

As is our practice with live events, we do not award Pinocchio ratings, which are reserved for complete columns.

“I am thrilled to report to you tonight that our economy is the best it has ever been.”

The president can certainly brag about...

Read full story
Some content from this outlet may be limited or behind a paywall.
See full media bias rating for Washington Post
From the Right
320
White House
7 Charts Illustrate the Amazing Labor Market Trump Touted in State of the Union
Breitbart News 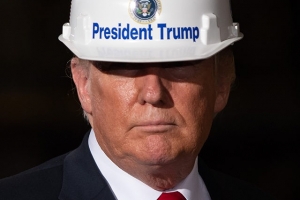 President Donald Trump used his 2020 State of the Union address to boast about the incredible labor market that has prevailed during his presidency.

Here are Trump’s claims in the SOTU followed by charts demonstrating the amazingly low levels of unemployment the American economy achieved.

President Joe Biden did not take questions from US reporters during his meeting with UK prime minister Boris Johnson on Tuesday. Mr...

The White House is in a bind over the potential breach of the federal debt ceiling as GOP lawmakers refuse to help Democrats avert a national...

The next few months will push President Joe Biden to wield every drop of his influence over Congress. Democrats are plunging into messy internal debates...

Republican candidates and conservative activists are planning to attack President Joe Biden's COVID vaccine mandates in court and on the campaign...

President Joe Biden is on vacation again this weekend as the crises his administration has created consume a troubled country which he apparently needs a few...

In China on Sunday, a state-run media outlet warned of "severe" military and economic consequences against Taiwan if Washington allows the self-ruled island to...

Former Trump administration officials are pushing back after the Biden administration sought their removal from military academy boards. The White House...

President Biden's approval rating among Americans stands in negative territory at 43%, a drop of six points in just one month, according to a new Gallup...

POLL: Less Than Half Of Americans Say Biden Is Mentally Stable Enough To Serve As President

Less than half of Americans believe President Joe Biden is mentally stable enough to serve as president, according to a Fox News poll released Monday....

President Joe Biden has defended the tax increases he's proposed to pay for his Build Back Better plan on the grounds that they'll level the playing field...