This cost would add to the federal deficit by reducing the loan repayments taken in by the Treasury each year. The effect would gradually taper off until about 2052, the CBO estimated.

Coverage was widespread and prominently featured across the spectrum. Headlines often varied on whether the plan “could” or “would” cost $400 billion. Some headlines in major right-rated outlets framed debt cancellation as “amnesty” or a “handout”; National Review (Right bias) put the word “cancelation” in quotes, and Fox News (Right bias) highlighted a higher cost estimate from the Committee for a Responsible Federal Budget (CRFB). Meanwhile, coverage from the left was more likely to use the term “student debt forgiveness.” 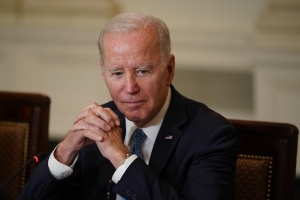 President Joe Biden’s plan to forgive student loan debt for many borrowers will cost roughly $400 billion, according to a Congressional Budget Office estimate released on Monday, rekindling a debate over the cost of student debt forgiveness and whether the plan will accelerate inflation.

The CBO also estimated Biden’s decision to pause student loan payments through the end of the year—extending a pause that began in 2020—will cost another $20 billion.

The estimates come one month after Biden offered... 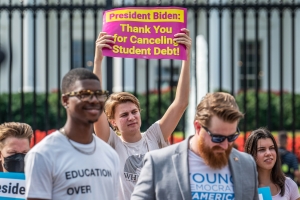 Craig Hudson for The Washington Post via Getty Images
News

President Joe Biden's plan to forgive $10,000 in federal student debt for most borrowers will cost the government about $400 billion, the nonpartisan Congressional Budget Office said in an estimate released Monday.

The CBO’s evaluation of the administration's policy said the price tag is "a result of the action canceling up to $10,000 of debt issued on or before June 30, 2022."

The president's plan covers borrowers with income below specified limits and an additional $10,000 forgiven for those who also received at least one Pell grant, CBO Director Phillip Swagel said.

The Biden administration's plan to forgive a significant portion of federal student loans will cost roughly $400 billion, according to new estimates from the Congressional Budget Office.

In a letter to Sen. Richard Burr (R-NC) and Rep. Virginia Foxx (R-NC), the senior Republicans on the Senate and House education committees, Phillip Swagel, the director of the CBO, estimated that the student loan plan announced by the Biden administration last month will cost about $400 billion but that the estimate was "highly uncertain."