The White House on Friday said there is no need to alter the nation's strategic nuclear posture after President Joe Biden's recent comments on nuclear risk, The Hill reports.

Biden, at a recent fundraiser, said that Russian President Vladimir Putin is "not joking when he talks about potential use of tactical nuclear weapons or biological or chemical weapons because his military is, you might say, significantly underperforming."

He also said: "We have not faced the prospect of Armageddon since Kennedy and the Cuban Missile Crisis."

Read full story
Some content from this outlet may be limited or behind a paywall.
Defense And Security, Nuclear Weapons, Russia, Ukraine War, Foreign Policy, White House 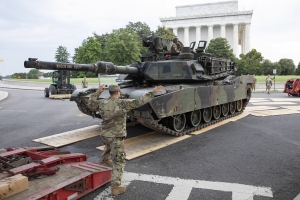 EPA
HEADLINE ROUNDUP
In Reversal, US and Germany Reportedly Move to Send Tanks to Ukraine

News
Inside the Army’s Newest Spy Plane
Defense One