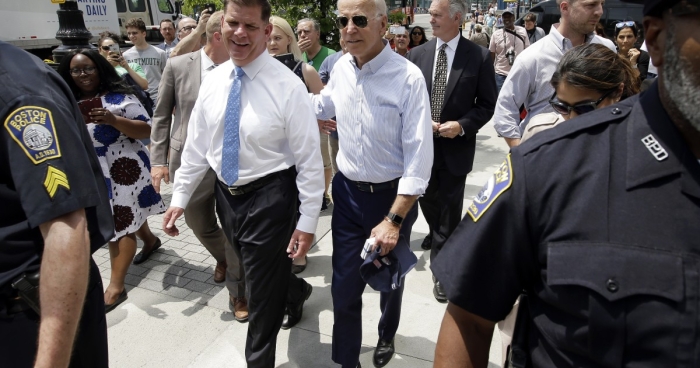 Walsh's mayoral campaign funneled close to $1.2 million to LB Strategies, where Higgins is employed as a fundraising consultant, according to the filings. The transactions were originally reported in March 2019.

The payments, which have increased in size to $14,650 per month, amount to more than half of the company's political business since 2013, according to Fox News, which cited campaign filings.

Amazon Workers’ Fight To Unionize Draws Help From Around The World

Roughly a hundred organizers have been calling workers from Amazon’s Bessemer, Alabama, warehouse in recent weeks, making the case for why they should unionize...

For years, McDonald's has internally labeled activists and employees working with the Fight for $15 campaign a security threat and has spied on them,...

As Democrats Debate How to Raise the Minimum Wage, Republicans Offer Distractions
ANALYSIS

The federal minimum wage could soon change. On the campaign trail, President Joe Biden said one of his main priorities was to raise the minimum wage to $15 an...

Capitol Police Officers Are Holding A Vote Of No Confidence In Their Bosses Who Left Them...

Members of Congress have been falling over themselves to praise the bravery of the Capitol Police since the attack on Jan. 6. But behind the scenes, Capitol...

In one of his first acts as new chairman of the Senate Energy Committee, Democratic Sen. Joe Manchin on Tuesday urged President Joe Biden to reconsider his...

The battle to increase the minimum wage for American workers continues in Congress, but labor rights activists say counteroffers from senators like Joe Manchin...

U.S. manufacturers aced the shutdown of their factories and warehouses last spring in response to Covid-19. They’re botching the recovery. After carrying...

From Amazon to Google, tech workers seek unions – and a voice

The tech industry has long held unions at arm’s length. But tech workers are increasingly demanding a voice. In the end, they may not need traditional union...

The U.S. closed the door to nearly all incoming foreign workers last year. The causes were Covid-19 restrictions that locked global borders and Trump...

General Electric Co. stock is certainly in recovery mode, as it has more than doubled off its 2020 lows, but part of those gains have come at the expense of...

“My husband just called me … he just got fired,” said Laurie Cox, her voice trembling ever so slightly as she put on a brave smile. But it was impossible to...

Walmart To Raise Wages For 425,000 Workers After Massive 2020 Sales Performance

Walmart announced it will raise wages for 425,000 store associates serving in “frontline” roles after the company reported record fourth-quarter revenue....

On a blustery winter day in South Dakota, the security guard stationed at the "man camp" outside the tiny town of Philip isn't in the mood for pleasantries...

Ramming a $15 Minimum Wage Bill Through the Senate Using Reconciliation Would Be a Norm-Busting...
OPINION

Fittingly for someone who spent more than three decades as a member of the U.S. Senate, President Joe Biden holds the so-called world's greatest deliberative...

Wind farms and massive arrays of solar panels are cropping up across public and private landscapes both in the United States and abroad as users increasingly...