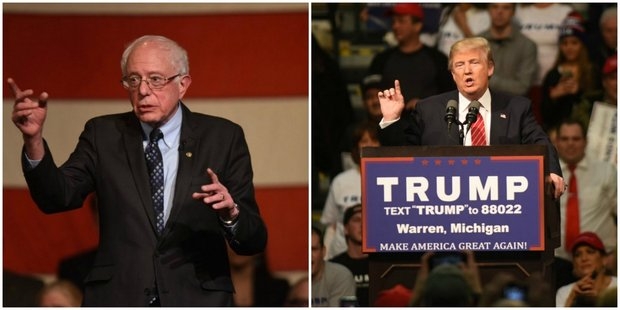 Few people believe Bernie Sanders and Donald Trump have much in common. But while Sanders and Trump may be polar opposites in some respects, they’re alike in some very fundamental ways. And their popularity is driven by some of the very same reasons.

Congress' job approval rating is 16%. Dysfunctional government was the single most important problem Americans mentioned in Gallup polls throughout 2015. Both Trump and Sanders are anti-establishment, which appeals to voters’ frustration. Both threaten to use the muscle of executive office to force change in the way they see fit.

World history shows that today’s conditions are ripe for a charismatic leader who promises to impose utopian solutions. Whether it’s bringing wage equality to the masses or protecting our nation from foreign intruders, when the people lose faith in their system, people seek outspoken leaders who pledge to bring order to the chaos. Sanders and Trump fill that role.

But it isn’t muscle and force that will lead to freedom, democracy, or a healthy political system. It’s electing politicians who are willing to work together to rid government of corrupt behavior and self-serving partisanship.

As Gallup points out, the rhetoric of candidates from both parties is very much alike: politicians are too beholden to political parties, to the rich and influential, and to big business to stick to principle or represent the people. Voters are very receptive to this message. Polls show that the very liberal, the very conservative, and many in between agree that Congress doesn’t operate with the best intentions of the people in mind. One third of Americans consider these issues a crisis.

Typically, politicians point their finger at the other party and ignore the misdeeds of their colleagues. Trump and Sanders are appealing because they’re willing to speak out not only against the opposing party but against the politically well-connected and elite of their own party. Many voters see this as an avenue to fix a broken system.

After all, back in 2008, Barack Obama had vowed that putting an end to the inappropriate influence of lobbyists in Washington would be a top priority of his administration. Yet little changed in eight years, and any small steps Obama did make have now been reversed by the Democratic National Committee.

What happened to his priority? Politicians continued to put partisan loyalty and the success of their party over ethical behavior. Influence and money equals votes. The “beat the other party at all costs” mentality has led to a climate in which corruption of the system has been able to thrive.

Real change would require that politicians not only take a hard look at their own behavior, but call out the improper actions of fellow party members. The problem is, that’s usually political suicide.

For example, senators avoid reprimanding others from their own party on the Senate floor, especially their party leadership. But Ted Cruz broke that rule when he publicly confronted Senate Majority Leader Mitch McConnell for lying about a deal McConnell had struck with other senators.

Republican Rand Paul says that he shares many of Cruz's frustrations with Congress but says Cruz “is pretty much done for and stifled, and it’s really because of personal relationships” within the party that Cruz lost due his faceoff with the Majority Leader.

Hillary Clinton is a politician who works within the system. An illustration is her censure of Bernie Sanders at a recent debate: "The kind of criticism we've heard from Sen. Sanders about our president, I expect from Republicans. I do not expect from someone running for the Democratic nomination to succeed President Obama.”

Clinton’s mentality has helped her win approval of the political establishment and staunch partisans of her party. But it’s not a senator’s job to unilaterally support the president simply because he’s of the same party. Congress was designed to be a check against the Executive Branch. America doesn’t benefit when politicians suppress their honest views of their leaders.

Voters from both parties are reaching for extremes to solve this problem. The difference is that many on the left think that it will take the humanitarianism of a socialist like Sanders to break up the crony capitalism and the stranglehold of party brass, while the right thinks a blunt and savvy business outsider such as Trump who knows the game is the answer.

But while all the presidential candidates have acknowledged that government dysfunction is a problem, no top candidate has devoted much time explaining how their policies would fix it. Instead, the common   theme from the candidates, particularly Trump and Sanders, is that their party will expand the power and control of government, ignore concerns of the other side, and fight harder to win partisan battles.

Rather than encouraging collaboration to rid the system of corrupt influences, the candidates advocate using the heavy hand of government to push through their preferred causes. This leads voters to become sidetracked by partisan arguments on immigration, minimum wage, health care or gun control. And while these are all important issues, they distract us from the core problems of government that continue to worsen.

The exacerbation of the culture war leaves Americans fighting the wrong battle. When two-thirds of Americans say they don’t trust Congress to work in their best interest, it’s vital that we have a president who will ensure that Congress put aside personal interest and partisan gain.

While voters are preoccupied over whether to be ruled from the left or the right, any suggestion of bipartisan cooperation to prohibit back-room political deals, eliminate pork barrel spending, or purge special interest influence is hopeless.

For Americans who’ve become fed up with the duplicity of Washington, voting against the establishment seems worthwhile. But when “outsider” candidates plan to magnify the same bad habits, things can only get worse.