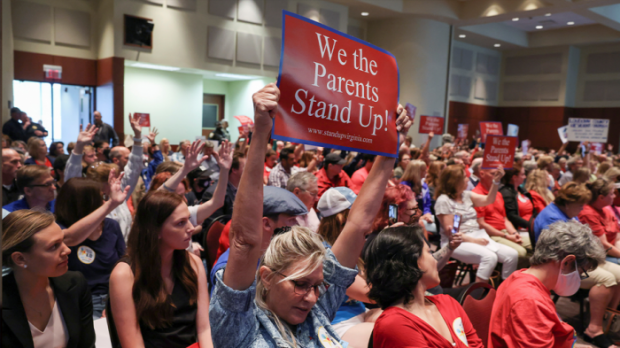 Even as debates about COVID-19 protocols in schools mostly die off, questions about safety, curriculum and faculty shortages remain as kids return to class.

Many parents of current K-12 students are satisfied with their own children's education, including majorities of both Republicans (74%) and Democrats (85%), according to recent data from Gallup. But overall, many U.S. adults aren't, especially Republicans. The same data says that just 42% of U.S. adults are satisfied with the state of K-12 education, the lowest reading Gallup has recorded since 2000. Republican satisfaction dropped from 50% to 30% since 2019. Of those who said they were dissatisfied, 82% either cited concerns with curriculum or political agendas.

In Uvalde, Texas, kids returned to school less than four months after a gunman there killed 19 student and two teachers at Robb Elementary School. The tragedy brought the issues of gun control and school safety back to the forefront of the national discourse. Some states, such as Ohio, have taken action to make it easier for teachers to be trained on carrying guns.

In many areas, schools are also being plagued by shortages of faculty and bus drivers. The National Education Association, the country’s largest teachers’ union, estimated in August that there were roughly 300,000 vacancies for teachers and school staff nationwide. Some districts are floating more hiring incentives and easier application processes to help alleviate the shortages.

Back-to-school coverage has been prominent from news sources across the political spectrum. Reports from left-rated sources tended to focus more on the return to school in Uvalde, the push for gun control and safer schools, and continued concerns about the spread of COVID-19 in classrooms. Reports from right-rated sources more often highlighted Republicans' dissatisfaction with curriculum, and framed it as a product of the culture war over education. Most coverage from right-rated sources framed those concerns as valid; some coverage from left-rated outlets framed concerns as misguided.

Schools Are Back and Confronting Severe Learning Losses

"The U.S. Department of Education last Thursday released data showing that from 2020 to 2022, average reading scores for 9-year-olds slid 5 points—to 215 out of a possible 500—in the sharpest decline since 1990. Average math scores fell 7 points to 234, the first statistically significant decline in math scores since the long-term trend assessments began in the 1970s."

How Bad Is the Teacher Shortage? What Two New Studies Say

"The researchers found that the national K-12 education labor market shrank by about 9 percent from March to May 2020—with significant job losses among school support staff, who were often laid off at the start of the pandemic when schools were closed. Many of the jobs that were lost in the spring were then recovered in the fall of 2020, but not all: By March 2022, employment levels remained 4 percent below pre-pandemic levels."

Satisfaction with US education dropping, according to Gallup survey

Teachers Unions Continue to Exploit COVID to Serve Themselves

"Instead of figuring out ways to boost the education of their students, United Teachers Los Angeles and other California teachers’ unions used the crisis to lobby for higher salaries and more spending — even though state public school spending has soared even as student enrollment dropped."

Uvalde children return to school after 21 students and teachers were slaughtered. But some kids refuse to go back to classrooms

Pediatric COVID-19 infections increase as kids head back to school

"More than 14.5 million children have tested positive for the virus since the onset of the pandemic, and since the beginning of 2022, approximately 6.65 million reported cases have been added. Children represent about a fifth of all reported cases on record. Despite the uptick in infections, with COVID-19 vaccine mandates in schools still virtually nonexistent, millions of children remain completely unvaccinated."